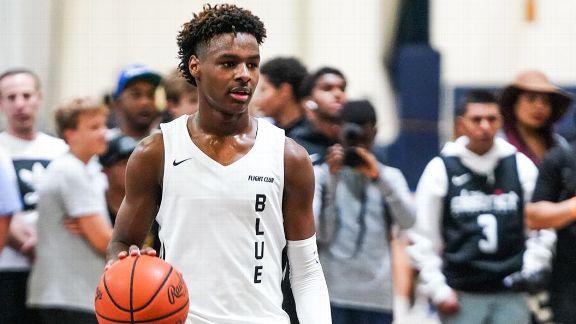 ESPN
By Nick DePaula
Throughout his high-school career,LeBron Jameswas no stranger to sneaker brands clamoring to sponsor his Saint Vincent-Saint Mary's basketball team in Akron, Ohio, outfitting the Fighting Irish with uniforms and sneakers well before he had officially turned pro.

As part of the industry-first structure, Flight Club will design the team's home and away Nike jerseys, as well as provide sneakers, hoodies, basketball towels and duffel bags for each of the players.

First established in 2005 in New York City, Flight Club's consignment-based brick and mortar stores can also be found in Los Angeles and Miami, featuring over 80,000 total limited-edition sneakers for sale.

The "Blue Chips" program name is a tongue-in-cheek nod to the 1994 film of the same name featuring eventual NBA All-Stars Shaquille O'Neal and Penny Hardaway in character roles. In the movie, the blue-chip high-school prospects were showered with extra benefits before committing to basketball scholarships with a fictional Los Angeles-based college.

The unique structure of the North Coast Blue Chips sponsorship falls within all compliance guidelines, according to sources familiar with the grassroots basketball space, as the team is being provided with athletic footwear and apparel for game and travel use.

Duke head coach Mike Krzyzewski attended his first game of the AAU season in April, with both Duke and the University of Kentucky reportedly having already verbally offered James Jr. a college scholarship.

James Jr. is expected to begin his high school career this fall at Sierra Canyon in Chatsworth, California, where he'll joinDwyane Wade's son, senior-to-be Zaire Wade, on the boys' basketball team, according to ESPN's Ohm Youngmisuk and Dave McMenamin.

The Flight Club sponsorship announcement comes during the same week that James Jr. launched his own Instagram page, using simply his nickname @Bronny. Within the first 24 hours, the new account topped one million followers. A day later, he'd tallied a total of 1.7 million followers.

"Told him 3 years ago the summer of 2019 I'd let him get one," his dad revealed to his own audience of nearly 50 million followers. "Damn time flies!"

James, his wife Savannah and Bronny each posted an image of James Jr. in the Flight Club-branded Blue Chips jersey to announce his first social-media account, amassing a total of 3.2 million likes in just two days.

While AAU teams have typically been solely sponsored by footwear brands like Nike, Adidas and Under Armour, the addition of Flight Club to the team's sponsor list adds a new dimension to the summer basketball circuit.

"Flight Club has been an integral part of its local communities, which overwhelmingly include youth and basketball culture," said Eddy Lu, co-founder and CEO of GOAT Group. "We are excited to partner with such a competitive, young team who we know will continue to accomplish great things in the future."

In the Los Angeles area specifically, the company has co-hosted entrepreneurship and sneaker-industry workshops and panels with Pharrell Williams' From One Hand To AnOTHER Inc. for students at Walton Middle School in Compton. Flight Club's Fairfax Avenue store location in L.A. also hosted a shopping fundraiser in support of Kuzma's Flint Water Crisis Fund and the Lakers Youth Foundation.

Another company also will see its logo featured on the Blue Chips' jerseys as high school sports network Mars Reel will be incorporated just under the number on the back of each jersey.

The digital media group will continue to capture footage of James Jr. and the team throughout their cross-country travels and tournaments during the summer season, having already launched two weekly "Mars Reel Chronicles" episodes centered on James Jr.

The debut episode has garnered over 500,000 views in less than a month. James Sr. is a partner and investor in the company. Each episode also features the LeBron-branded sneakers worn by each player, with their trips to Flight Club expected to be included in upcoming weeks. 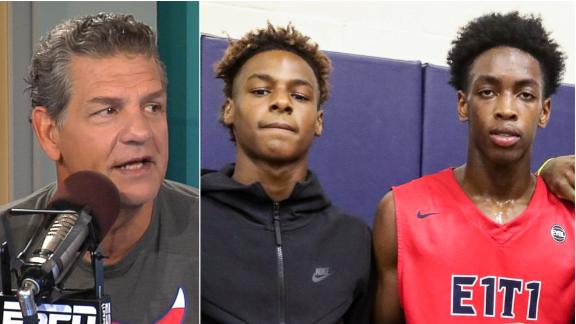