Auriemma call to Mo'ne a violation 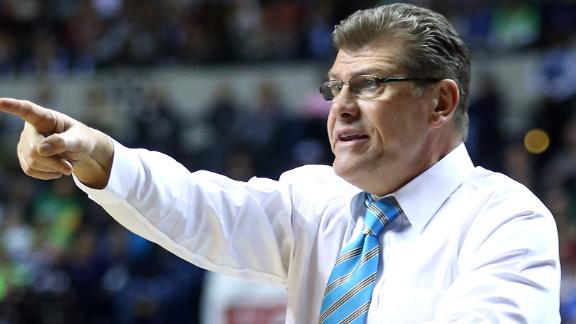 Athletic director Warde Manuel said the school accepts the decision but does not agree with it.

Davis, who is also a standout basketball player, was the 18th girl to play in the event and the only one to win a game on the mound. She told reporters during the World Series that her dream was to play point guard for the nine-time national champion Huskies. Her Taney Dragons team reached the Little League semifinals.

Manuel said Auriemma checked with the school's compliance department before getting on the phone and was told the 13-year-old would not be considered a prospective student athlete and the call was permissible.

"The nature of coach Auriemma's two-minute conversation with Mo'ne had nothing to do with recruiting and instead had everything to do with congratulating and encouraging Mo'ne to continued success," Manuel said.

The school said it's not sure whether the NCAA will impose any sanctions, but Manuel said he considers the matter to be closed.

UConn began looking into the issue after a school filed a complaint with the American Athletic Conference. Conference spokeswoman Chevonne Mansfield says the complaint did not come from an AAC member.

Auriemma said that during the call he told Davis he was impressed by the way she was handling the pressure of the Little League World Series and to make sure people were treating her like a baseball player and "not like, 'Oh, look at this girl playing baseball.'"

He was incredulous that someone would file a complaint.

"It shows you what is wrong not only for things that go on but also with some of the people that I coach against," he said.

Auriemma also said he has never seen Davis play basketball and doesn't know if she is "a superstar or can even reach the basket."

"There's guys playing college basketball driving around in cars that cost more than my house and we're worried about a phone call that I made?" he said.