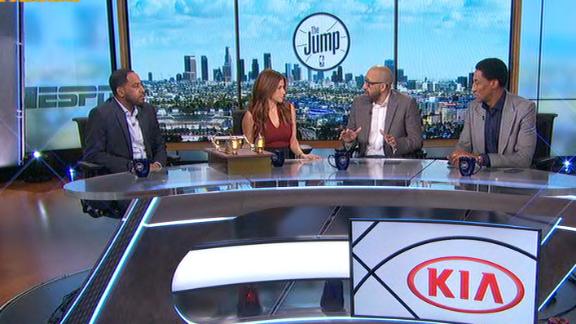 The Cleveland Cavaliers have acquired Rodney Hood and George Hill in a three-way deal with the Utah Jazz and Sacramento Kings.

The Cavaliers will send Iman Shumpert and a 2020 second-round pick via the Miami Heat to the Kings in the deal.

Sacramento acquires Joe Johnson from Utah, which gets Jae Crowder and Derrick Rose from Cleveland.

It was part of a flurry of deals before Thursday's 3 p.m. ET trade deadline by the Cavaliers, who also traded Isaiah Thomas and Channing Frye to the Lakers for Jordan Clarkson and Larry Nance Jr.

Hill, whose ability to guard both positions in the backcourt could help the struggling Cavaliers' defense, had been unhappy with his role with the Kings, whom he signed with last summer after turning down a more lucrative extension offer with the Jazz.

By shedding Hill's contract, Sacramento joins a small group of teams with cap space for the summer of 2018. The Kings now have $24 million in room that could increase to $40 million if Shumpert and Garrett Temple opt out of their contracts.

The Kings also are acquiring Bruno Caboclo from the Toronto Raptors in exchange for Malachi Richardson.

The oft-injured Hood, 25, was averaging a career-high 16.8 points and 2.8 rebounds in his fourth season with the Jazz. He missed seven games earlier this season because of a sore left ankle.

He was fined $35,000 last month for slapping a cellphone out of a fan's hand while exiting the court in Washington after his second technical foul.

With the Cavs sending six players out and unsure whether all four players acquired Thursday will be ready to play in Atlanta on Friday, multiple team sources told ESPN's Dave McMenamin they expect two-way players London Perrantes and John Holland to suit up and play against the Hawks

Rose, the 2009 Rookie of the Year and 2011 MVP while with the Bulls, struggled to find his way in his only season with the Cavaliers. The 29-year-old has averaged 9.8 points and 1.6 points this season while appearing in only 16 games as he battled injuries and inconsistency.

Crowder, who joined the Cavs as part of the Thomas deal, shot 41.8 percent from the field and 32.8 percent from beyond the 3-point arc while averaging 8.6 points this season. With the Jazz, the 27-year-old could come off the bench as the No. 1 option at forward behind Derrick Favors and Joe Ingles.

Shumpert, who was averaging 4.4 points and 2.9 rebounds for the Cavs this season, missed Wednesday's game as he continues to deal with plantar fasciitis in his left foot. He missed 25 games earlier this season after having arthroscopic surgery to correct fluid buildup in his left knee.

Johnson had played a minor role off the bench for the Jazz this season, averaging 7.3 points and 3.3 rebounds. The 36-year-old guard is headed to the Kings, who have already stated that they were going to focus on developing their younger talent moving forward.