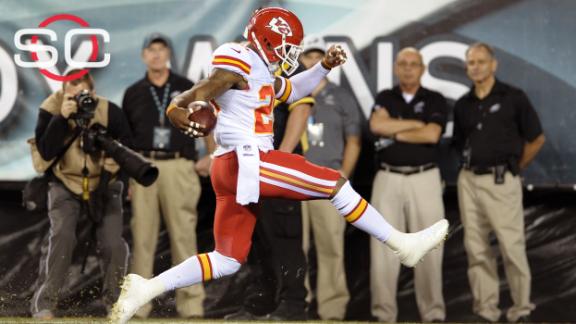 Most observers, including members of the Chiefs' medical staff, marveled at the fact.

"It's truly a remarkable thing in our business and in sport and in life," trainer Rick Burkholder said.

Berry's return came at the start of a three-day minicamp for quarterbacks, rookies and veterans who have been injured. Full-squad training camp begins Saturday.

"My whole thing was that it's going to be what it's going to be," said Berry when asked if he believed he could return to football this quickly. "I'm going to control what I can control and the two things I could control were my attitude and my effort. I just tried to wake up every day and just build off whatever I did the day before.

"You can't look too far ahead. I did that in the beginning and ended up crying to my dad for about 30 minutes at breakfast because it was a long road. I just wanted to take it day step by step and day by day and see where it took me."

Berry, like his teammates, didn't wear full pads so he wasn't subject to any contact. But coach Andy Reid indicated the plan is to give Berry more work, even in contact drills, if he shows he can handle it.

"We'll just see," Reid said. "We're just going to take it nice and easy. He worked today, he'll work tomorrow and he'll be off (Friday) like I do with the veterans who are coming off injury.

Reid took much the same stance when asked what Berry might give the Chiefs during the regular season.

"He's going to tell you, 'I'm there,"' Reid said. "We'll take it gradually and see how he does. We're not going to force him into anything. We're going to try to be as smart as we can with him."

Berry's return to the practice field is a victory on its own. He was diagnosed with lymphoma in late November after a mass was discovered in his chest. He began chemotherapy in December and finished in May.

All along, he continued to work out in the hope of making it back to the practice field. Burkholder said that instead of taking his chemo through a traditional port, Berry opted for an IV so he could work out during the rounds of treatments.

"He came out on the other side of the chemo a pound heavier than he went in," Burkholder said. "That tells you what kind of genetic person he is and why he's a professional athlete."

Berry's doctors declared him cancer-free on June 22. It was kept quiet publicly per Berry's wishes.

Berry continued to work out in Florida, occasionally with teammates, including tight end Travis Kelce. Berry recently returned to Kansas City, where the Chiefs put him through what Burkholder called "a very extensive testing protocol" to make sure he was fit to play football. The testing included a bone density study and cardio and orthopedic exams.

"He sailed through every test we gave him," Burkholder said. "(Berry's doctors) were pleasantly surprised with his numbers, and we were as well."

The Chiefs' medical staff huddled Tuesday night and cleared Berry to return to practice, long before the point anyone thought possible eight months ago.

"We kind of went back and looked at who in all sports has had something (like) this, and then you kind of narrow it down from there, contact sports," Reid said. "(Former hockey star) Mario Lemieux and that situation where he came back and led the league in scoring and was the MVP. There were a couple of positive things in there. There were pluses and minuses.

"What it really comes down to is you've got to take it from an individual standpoint. ... Rick talked about the port and taking (the chemo) directly into his vein, and that's been his attitude: 'I'm going to work out during this and I'm going to start the first game.' That's what drove him through this."