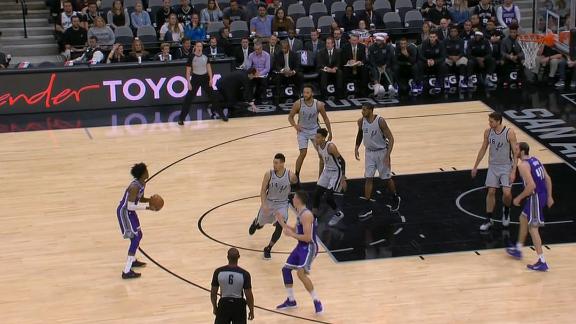 SAN ANTONIO -- Sacramento Kings coach Dave Joerger was said to be OK after suffering a brief dizzy spell and falling to one knee before leaving Sunday's 113-98 loss to theSpursin the first quarter.

The Kings saidJoerger experienced a "momentary episode of light-headedness." He did not return to the game for precautionary reasons.

"He's OK. He's alright," Kings assistant coach Elston Turner said. "Sometimes when you stand up real fast from a sitting position, you get a little bit light-headed. And that's what happened."

Officials weren't sure whether Joerger would remain with the team, which plays Tuesday at New Orleans, or return to Sacramento.

Joerger appeared to be experiencing some discomfort when he was shown on the scoreboard during pregame introductions.

Turner said that, to the best of his knowledge, Joerger had been "feeling great" before the game.

"He's a young coach in good health," Turner said. "A lot of energy, and he exerts it during the game. He exerts it in practice. And it's just an incident that happened. And unfortunately, it was when the lights were on."

When Joerger fell to his knee, he was shouting instructions to players on the court. Joerger was immediately helped back to his feet by Turner before being taken from the bench area to the visitors locker room and checked out by medical staff.

"I just had to grab him and pick him up," Turner said. "If you black out, you can really hurt yourself. So I was just trying to keep him from hitting the ground."

Kings rookie De'Aaron Fox scored a career-high 26 points in the loss and didn't immediately know what happened with Joerger.

"We were on offense. I kind of looked, and I saw E.T. [Turner] standing up. I saw Coach walking to the back, and then after that I'm still focused on the game," Fox said. "They let us know what happened when we got back at halftime. We just went out there and kept playing. E.T. stepped up, and he did what he was supposed to do. It had no real effect on the game."

Still, some Kings players expressed concern. Former SpurGeorge Hill said Joerger addressed the Kings in the locker room at halftime and seemed upbeat about his prospects.

"You never want to see anybody not feeling good," Hill said. "We just wanted to know if he was fine. [He] said he was going to get healthy and get back with us."