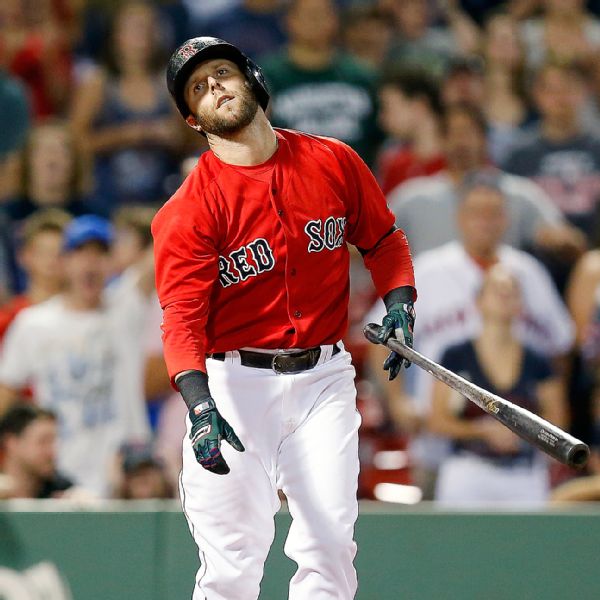 NEW YORK -- After one game and four at-bats, Dustin Pedroia could be headed right back to the disabled list.

Pedroia wasn't in the Boston Red Sox's lineup Friday night for the opener of a pivotal three-game series against the New York Yankees. According to manager John Farrell, the veteran second baseman is dealing with a recurrence of swelling and inflammation in his surgically repaired left knee and didn't respond favorably to treatment after not playing Wednesday night at Tampa Bay and having Thursday off.

"His knee has flared up on him," Farrell said. "Our goal was to get him some at-bats [at Tampa Bay] before this series. He's shown a little bit of a pushback in terms of the reaction to it."

Farrell said the Red Sox believe Pedroia will be able to resume playing on a regular basis this season. Pedroia is with the team in New York but has been consulting with Dr. Andreas Gomoll, a Boston-area knee specialist. Farrell said he "wouldn't rule out" a return to the disabled list.

"We'll see where this [is] going over the next 24 hours," Farrell said.

Pedroia, who turns 34 next Thursday, had arthroscopic knee surgery after last season. The issue cropped up again in April when Baltimore Orioles star Manny Machado slid hard into Pedroia's knee. Last month, Red Sox president of baseball operations Dave Dombrowski referred to Pedroia's "bad knee" as something the Red Sox are "going to have to watch for the rest of his career."

In Pedroia's absence, utility infielder Eduardo Nunez has gotten most of the playing time at second base. The Red Sox acquired Nunez in a July 26 trade with the San Francisco Giants, and through 11 games with Boston, the ex-Yankee is batting .420 (21-for-50) with six doubles and four home runs.

"He was swinging the bat well in San Francisco prior to the trade and hasn't stopped," Farrell said. "He's jumped right in and hit anywhere from first to fourth in the lineup and there's consistent hard contact. He has been a huge boost to our offense that, quite frankly, in July we were scuffling to score some runs. He's injected some energy."
Report a correction or typo
Related topics:
sportsespnmanny machadoeduardo nunezmlbnew york yankeesbosdlpedroiakneeboston red soxred soxdustin pedroiasan francisco giantsbaltimore orioles
Copyright © 2021 ESPN Internet Ventures. All rights reserved.
More Videos
From CNN Newsource affiliates
TOP STORIES