Everybody gets involved as Lonzo Ball, Lakers blow out Pistons 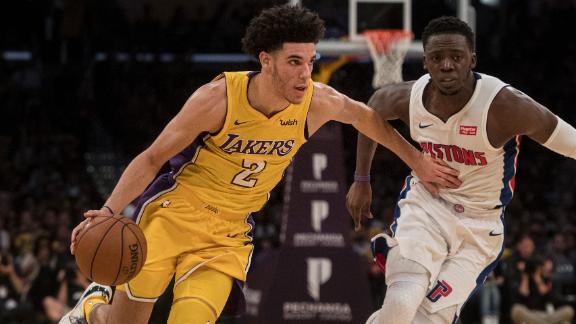 LOS ANGELES -- Lonzo Ball sat the entire fourth quarter Tuesday. But this time, Ball got to sit back and rest as the Lakers enjoyed a 113-93 blowout win over the Detroit Pistonsat Staples Center.

This game was a stark contrast from last Friday when Ball and the starters were benched in the final 3:42 of a loss to Toronto after Lakers coach Luke Walton wanted better transition defense. On this night, Walton got to do something he rarely gets to do -- rest his young starters in a Lakers' blowout.

Even though he didn't play the fourth and his final stat line might not jump off the sheet, Ball made his impact felt in the game.

"Take away the Phoenix game, this is the best game he's played, I thought," Walton said of Ball, who had his top game since having 29 points, 11 rebounds and 9 assists against Phoenix in the second game of the season. "The way that his pace was, the way he pushed the ball all the time, he was in the other team's paint. He just set the tone.

"And I thought the whole team fed off the way he was playing. I didn't even he look at his final stat line because I don't care what it was. I thought he was really, really impressive tonight."

After taking the blame for the Lakers' loss on Saturday in Utah and even the team's lack of offense and pace of late, a more aggressive Ball pushed the ball whenever he could and looked to score more than he had in the previous four games. The Lakers (3-4) played with the same urgency, stopping a two-game slide and halting Detroit's three-game winning streak.

Ball, who had no turnovers in a game for the first time in his pro career, finished with 13 points, 6 rebounds, 3 assists and 2 blocks. Ball's assists total wasn't nearly an indication of how much the rookie moved the ball. Often times, his pass led to a hockey assist as Ball would initiate movement with a pass to a teammate, who immediately hit a cutting teammate for a basket.

But a few of the assists Ball did get were highlight passes. On one assist, Ball tipped an offensive rebound -- left-handed -- to Brook Lopez for a score underneath. On another assist, Ball split two Pistons defenders, drove into the lane before dumping the ball off to Andrew Bogut under the basket for another score.

The rookie also didn't just settle for shooting 3-pointers and letting the defense sag. While he did drill a step-back 3, Ball looked to drive to the basket or take midrange shots and keep the Pistons off balance. On one play, Ball did what he does best, grabbing a defensive rebound, pushing up the pace as the Pistons (5-3) were getting back and taking it to the rim for a score. The rookie shot 6-for-13 from the field -- his best shooting night since he shot 12-for-27 against Phoenix.

"It is a good game anytime we win," Ball said when asked if he agreed with Walton that this was his best game outside of his near triple-double against Phoenix. "This is my third win. My third good game."

"We felt like we were playing slow ... my game goes up a lot when we play faster."

The previous two games had been somewhat rough for Ball. On his 20th birthday last Friday, Ball not only watched Kyle Lowrygo for a triple-double, but he and the Lakers' starters were benched for the last three-plus minutes in a 101-92 loss to Toronto.

Then in Utah, Ball watched rookie Donovan Mitchell throw down one of the dunks of the season on a monstrous one-handed follow slam and then a 3-pointer that electrified the Jazz crowd and swung the momentum before the fourth quarter. Ball took blame for the 96-81 loss, saying that he should've boxed out Mitchell and that his turnover led to Mitchell's 3.

The Lakers played inspired from the start. Brandon Ingram was all over the place with 13 points, 6 assists, 5 rebounds and 4 steals.

"To me it is night and day," Ball said when Ingram is playing free and aggressive without getting bogged down mentally the way he can sometimes. "If he plays like this, we will be hard to beat. He is only 20."

The Lakers were engaged in this game from the start the way they were in their previous win over another team that came into Staples hot -- the Washington Wizards. Larry Nance Jr. produced another double-double with 14 points and 12 rebounds and also set the tone for hustle when he hit the floor hard for a loose ball with Stanley Johnson. Nance has 22 rebounds in his past two games.

Kyle Kuzma was a spark again with 16 points, and Julius Randle continued his strong play off the bench with 17 points and seven rebounds. Seven Lakers scored in double figures, including Kentavious Caldwell-Pope, who had 13 points and six rebounds in his first game against his former team.
"It was awesome," Caldwell-Pope said of beating the Pistons. "I feel good and my teammates feel good and just got to carry it over."

Balanced Lakers roll against Pistons
After the Pistons topped the Warriors and Clippers earlier in their West Coast trip, they fall to the Lakers who have seven players score in double digits.

Lonzo blocks, rebounds and scores
Lonzo Ball blocks Reggie Jackson then grabs a rebound and takes it all the way to the other end to finish with a layup.