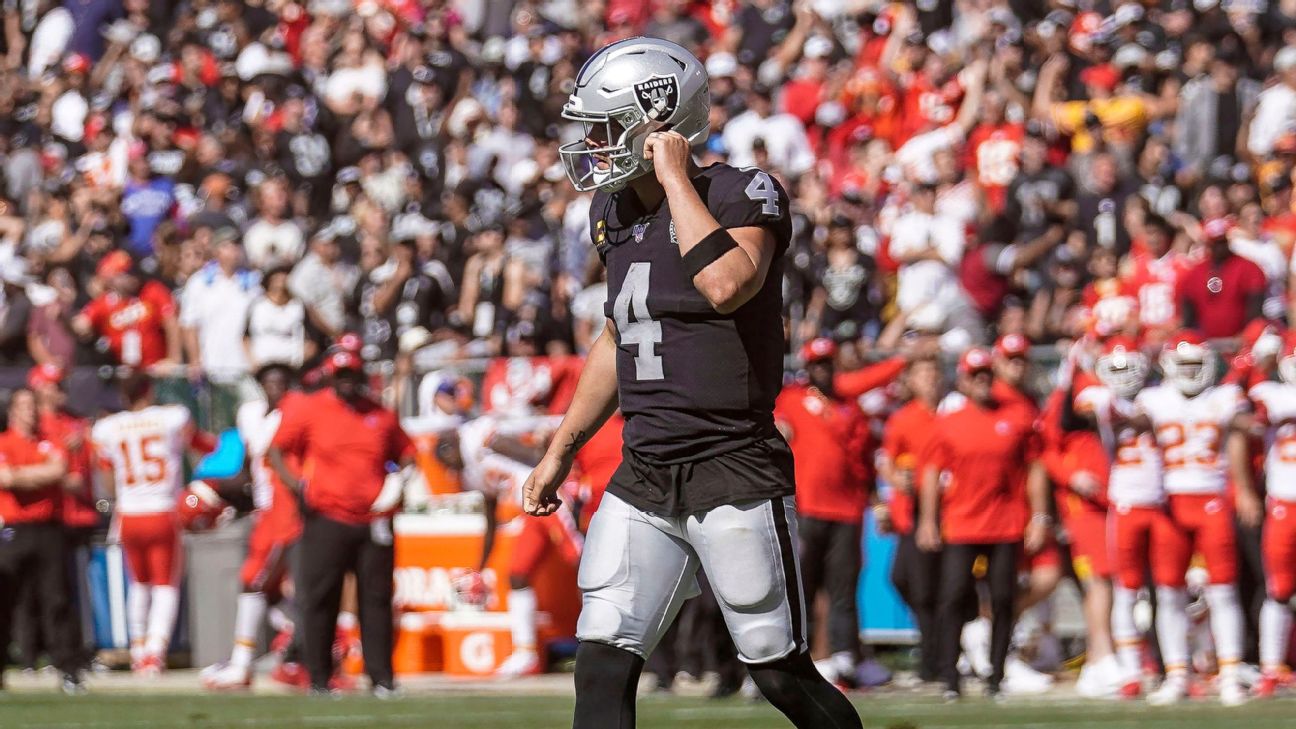 Because while Carr and the Raiders' AB-less offense were humming in the 24-16 season-opening victory over the Denver Broncos, that has stalled over the past two weeks. In fact, since taking a 10-0 lead over the Kansas City Chiefs into the second quarter in Week 2, Oakland has been outscored by a combined 62-14.

"It's caused us a little bit of ... rethinking," Gruden said Wednesday of Brown's departure and the subsequent impact on the wideout group. "When you lose your starting 'Z,' who arguably is a great player, I don't think anyone's going to dispute that you have to replace him. And we're making an effort to move Tyrell [Williams] around; we're bringing on some younger guys. J.J. Nelson also got hurt; don't forget that. He was hurt. Dwayne Harris got hurt, so we've had some multiple things to deal with, and we're dealing with them."

Brown, when right, is no doubt a game-changer on the field. But the team grew weary of his constant histrionics that included helmet issues, unexcused absences, a confrontation with general manager Mike Mayock, Brown releasing a telephone conversation with Gruden and Brown asking for and getting his release, not to mention his frostbitten feet.

Now, Williams has been elevated to top wideout.

"It's definitely different," Carr said of Williams. "He's got to run some different cuts; he's got to run some different routes. He's got to do a lot more for us than originally that was planned, right? We had a plan of two guys sharing a certain load. And now we've got him, J.J.'s back from his injury, we've got [recently acquired receiver] Trevor [Davis], we've got Hunter [Renfrow]. We're trying to figure out what's the perfect way to do it. We've got three really good tight ends also, with our running backs."

The Raiders no longer have wide receiver Ryan Grant, who started the season opener, had just one catch for minus-2 yards in Week 2, was inactive at the Minnesota Vikings on Sunday and was cut on Wednesday. They do, though, have preseason wideout favorite Keelan Doss, who has yet to catch a regular-season pass.

Carr, meanwhile, has come under fire for a lack of deep shots in Minneapolis, where the Raiders were trailing 21-0 before they had their second first down of the game.

Plus, Carr started out by completing three of his first four passes for seven yards, with an interception, and taking two sacks before finding tight end Darren Waller for a 30-yard gain while the Vikings were holding that three-touchdown advantage in the din of U.S. Bank Stadium.

"I think he's done some good things," Gruden said of Carr. "I'm not going to put it all on Derek. We take responsibility as a playcaller. I'm calling the plays and designing some of this stuff, so I put it on myself. He's done a good job.

"Getting stuffed on fourth and a foot isn't his fault. He didn't miss the blitz pickup in the red zone. We had a ball that could have been caught, could have set up points at the end of the half. He's doing some good things. I'm not going to sit here and say that we're a finished product yet. We've gone through a lot of change through the first three weeks, and we played two really good teams, actually, three really good defenses in back-to-back weeks."

Against the Vikings, Carr finished 27-of-34 for 242 yards with two touchdown passes, the pick and four sacks. He led an eight-play, 75-yard touchdown drive late in the fourth quarter.

"It's not like they're not being called, it's not like we're not trying," Carr said of the deep shots.

Carr pointed out five times that deep balls were called.

Then how fine is that line between taking what the defense gives you and taking what you want?

"If you want to throw it up into two people, you can take it and try to get what you want," Carr said with a laugh. "But I'm sure I'd get some good comments on that one, too, if I tried it. It would be fun either way.

"But there is a fine line when it's a closer score ... if a guy is one-on-one and you choose not to throw it, that's different. If it's a zone coverage and they're all looking at you, trying to bait you to throw the deep shot, that's different. I've been in that situation, sadly, too many times where it's like, I know I'm going to answer about this later."
Report a correction or typo
Related topics:
sportsespnnfloakland raidersderek carr
Copyright © 2020 ESPN Internet Ventures. All rights reserved.
More Videos
From CNN Newsource affiliates
TOP STORIES