James: 'History made to be broken' 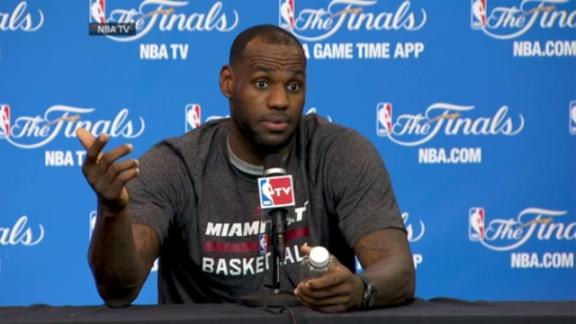 SAN ANTONIO -- LeBron James prefers to let the words come to him in the final moments before he addresses his teammates before tipoff. He speaks off of instinct and emotion, not from a script. But with his team trailing 3-1 heading into Game 5 of the NBA Finals on Sunday night, James already has a pretty good idea of the message he needs to send.

"So history is made to be broken, and why not me be a part of it? That would be great. That would be a great storyline, right? But we'll see what happens. I've got to live in the moment, though, before we even get to that point."

James seemed relaxed, even Zen-like, on the eve of what could be a shockingly early, disappointing end to the Heat's season. He sipped on a bottle of lemon juice, cayenne and ginger as he addressed the media for nearly 10 minutes and waxed poetic on his place in the game, and the way he's grown from his experiences during the Heat's four consecutive NBA Finals appearances.

James has been the Heat's most consistent player in this series, averaging 27.5 points in the four games. But if the Heat fail to rally in this series, he says none of that will matter to him.

"If you told me I was averaging 28, shooting 60 percent from the floor and 61 from the 3-point line and we'd be down 3-1, I would never give you another interview," James said. "I've been telling myself I need to do more. Is it too much to ask myself? I don't know. I don't know. I need to do more because what I'm doing isn't enough. You know, it's just what I put on myself.

It would help, though, if he got a bit more help from his teammates. In Miami's Game 4 blowout loss, James had 28 points while the Heat's other four starters combined for the same number. Dwyane Wade had just 10 points on 3-for-13 shooting, but said Saturday that it was simply a poor performance, not due to an injury or fatigue. "I'm fine," Wade said. "Way better than I've been in a long time. There is nothing I point out at all. Last year I had one leg and did all right. So I'm totally fine, man. I didn't play well in Game 4. Has nothing to do with my health at all."

Wade said that he worked out by himself in a gym on Friday "just to go in there a little bit and have your moments to yourself," then spent Saturday reconnecting with his teammates. It's been a rough series for the Heat shooting guard thus far, prompting questions about the viability of the Big 3 of James, Wade and Chris Bosh beyond this season.

"He has more than enough," Miami coach Erik Spoelstra said of Wade. "He's proven time and time again that he has an incredible way of just finding a way. Finding a way to impact and help your team win. And that focus is just for tomorrow. We had the extra day of rest, which I think is good. I think it was good physically for our guys and mentally as well."

ESPN reported after Game 4 that the Heat's success or failure in these Finals will not affect James' decision on whether to opt out of his contract by the end of this month, according to a source with knowledge of the situation.

Asked Saturday about the future of the Big 3, James dismissed the question as he has every question about his future plans all season.

"I don't need any motivation about the summertime or whatever something that's going on after the fact," James said. "I live too much in the moment. I can't worry about what goes on after this series is over with. Win, lose or draw, I live now and worry about the future once it's upon me."

What's upon the Heat is a comeback that would be historic if they can pull it off. This is the 32nd time the NBA Finals have been 3-1 after four games. None of the previous 31 teams that have trailed by that margin have come back to win.

"I won't change my approach," James said. "I hold guys accountable. I don't let things slide. I hold guys accountable and I want guys to be great while they're out on the floor and do what's best for the team. If you do that, you put the team before yourself, then I can live with that. So my leadership approach is different from others and I live with it.

"I just want my teammates to be themselves, man. You know, I feel like I need to do more, too. It's how I am. My teammates are everything. Obviously I wouldn't be sitting up here with this, the NBA Finals thing behind me, without them. You know, and they've been there all year, and I still believe in them. The guys that are struggling, I believe they're going to have a big game tomorrow. The guys that haven't been in a rhythm, I feel like tomorrow's going to be the best rhythm they've been in.

"Tomorrow might be the game where I need to be picked up like I was in Game 1 where I caught a cramp. I believe in them, and I ride with them no matter what."