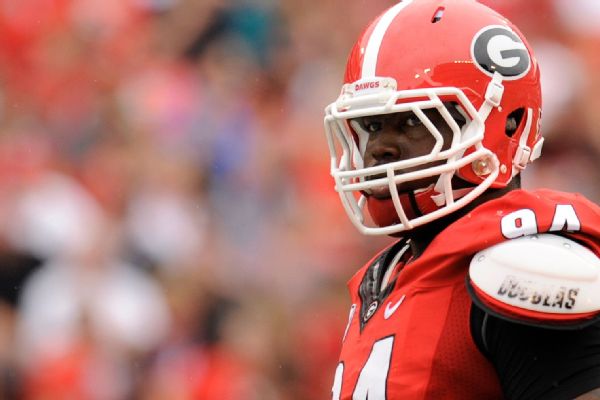 Former SEC defensive lineman Jonathan Taylor has pleaded guilty in a domestic violence case that ultimately led to his departure from Georgia.

Taylor originally signed with the Bulldogs out of high school but was dismissed by then-coach Mark Richt after an arrest for aggravated assault in July 2014. Earlier this month, he was sentenced to three years' probation, fined $1,000 and ordered to complete 100 hours of community service.

Taylor, who alsowas arrested on charges of theft by deception earlier in 2014, spent a year at a junior college before then signing at Alabama. He spent only a brief time on campus in Tuscaloosa before being arrested on another charge of domestic violence. The 6-foot-4, 335-pound former four-star recruit was dismissed by Crimson Tide coach Nick Saban before ever appearing in a game, although that charge was later dropped when the victim recanted her statement to police.

Even after Taylor's second domestic violence arrest, Saban stood by his decision to give him another chance.

"But we're not apologizing for what we did, and we're going to continue to create opportunities for people in the future and we'll very, very closely evaluate everyone's character that we allow in the program, because we all have the responsibility to represent the University of Alabama in a first-class way."

Taylor said he appreciated Saban's comments at the time but wished that Alabama would have waited before it made the decision to dismiss him.

"My story is going to end well because I'm going to give my all to my education and to my team," Taylor said. "People who have never met me may think they know me, but I don't think they do know what I have and have not done and who I am."