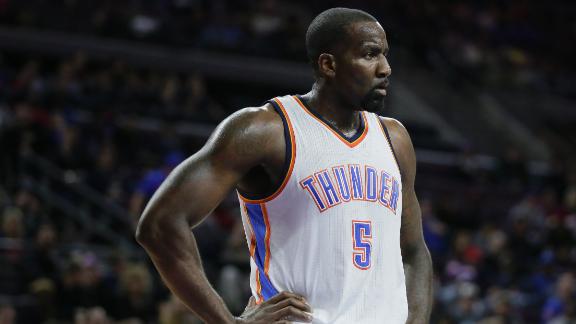 OKLAHOMA CITY -- Oklahoma City's Kendrick Perkins fired back at Kings forward Rudy Gay, who called the Thunder center a "clown" on Saturday in response to comments from earlier in the season that downplayed Sacramento's surprising start.

Perkins, who prior to a November matchup with the then 5-1 Kings was caught in a huddle saying "these m------------ are still the Sacramento Kings," took Gay's comment in stride.

"I'd rather be a clown than be a virus," Perkins said. "At least if I paint my face, I can wash the paint off. A virus gets in your bloodstream. You can't get rid of that."

Perkins is of course referencing how Gay has bounced around the league the past few seasons. He was traded from the Grizzlies to the Raptors and then to the Kings, with each team that traded him away improving after the deal.

The Thunder host the Suns on Sunday but have a matchup with the Kings on Tuesday in Sacramento on ESPN.

"Yeah, I'm going to worry about the Suns tonight, and then I'll worry about Mr. Gay and the Kings tomorrow," Perkins said.

Perkins has been the subject of regular criticism, with other players routinely taking issue with the way the physical Thunder big man plays. Recently, Warriors forward Marreese Speights said Perkins' "game is terrible," which isn't the only off-court dust-up in which Perkins has been involved.

"I'm glad I'm on their mind, though," he continued. "I'm glad they go to sleep thinking about me at night."