LiAngelo Ball works out for Lakers, says he's moved on from time at UCLA 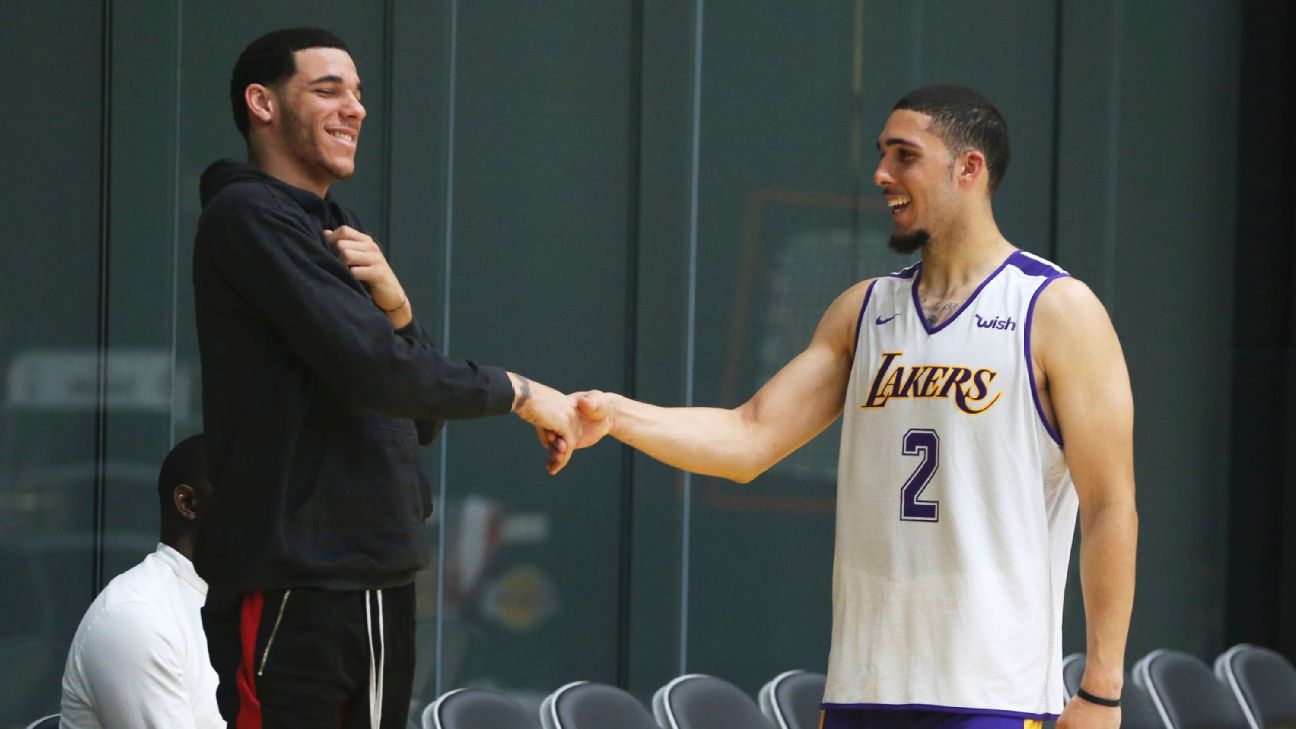 EL SEGUNDO, Calif. -- With his brother Lonzowatching from the sideline, LiAngelo Ball went through a pre-draft workout with other prospects for the Los Angeles Lakers on Tuesday.

The second of three Ball brothers, LiAngelo isn't sure what his draft prospects are after leaving UCLA early during his freshman season to play in Lithuania with his younger brother LaMelo. But he is ready to tell NBA teams that he has closed the chapter on his brief, turbulent time with UCLA and that he has matured after playing pro ball overseas.

Ball said when teams ask why things ended at UCLA, he tells them, "I don't really remember too much about that. I just moved on, went overseas and just learned from over there and then came back and brought my talent back out here."

Ball said the experience overseas contributed to his growth as a player and an individual.

"Just being more mature as far as coming in and doing what you have to do and don't worry about outside stuff," he said. "More focus around the game really."

Ball, 19, wants to follow in his older brother's footsteps and play for the Lakers. However, unlike Lonzo, who was selected second overall last year, LiAngelo faces a greater hurdle. He needs to prove to NBA teams that he should be drafted and can contribute.

The 6-foot-5 wing averaged 12.6 points for Vytautas Prienu in the Lithuanian league after leaving UCLA as a freshman. He was suspended indefinitely by the Bruins after he and two other teammates were arrested on suspicion of shoplifting during a team trip in China. He and his father, LaVar, felt that playing overseas and preparing for the pros immediately was more beneficial than waiting to see when he could play at UCLA.

Ball scored in double figures in 10 of 14 games with Vytautas, notching three games of 20 points or more. In an exhibition game against the Guangdong Southern Tigers' junior team, he scored 72 points.

The guard said he learned a more professional approach while in Europe.

"Oh that changed a lot," he said. "Because if you are not producing over there, they won't ask no questions, they'll just take you off the team like that. You won't get paid or whatever. You got to come in every time ready to play your hardest and produce. That changed my mindset. Every time I hit the court I have to come out and play my hardest."

He said the experience also gave him a better feel for the game and a taste of what playing pro ball is like.

"They do a lot of screen-and-rolls, a lot of more pro setting," he said. "I felt like that prepared me a lot for the NBA game."

While LaVar Ball has been critical at times of the Lakers' handling of Lonzo during his rookie season, LiAngelo said he is not concerned about the possibility of teams shying away from him because of his outspoken father.

"I don't worry too much about what my dad is doing," he said. "I know what I am about, I am here, playing for these guys, playing for the Lakers, that's what it's going to be."

Working out with a group that includedSt. Bonaventureguard Jaylen Adams,UCLAcenter Thomas Welsh,Virginiaguard Devon Hall,Syracuseguard Tyus Battle andArizonacenter Dusan Ristic, Ball said he was able to show that he can shoot from the outside and help his units win in 2-on-2 and 3-on-3 action.

On one side of one court, Lonzo, the Balls' agent Harrison Gaines, and Lonzo's manager and good friend Darren Moore watched. President of basketball operations Magic Johnson watched from another side.

"He is a hardworking kid," Welsh said. "I had a chance to play with him on 3-on-3 and 2-on-2 live action stuff. He is a lot of fun to play with. ... He was shooting it extremely well. I think that is one thing he could always do well. He has stretched that shot out to NBA range so it is exciting to see.

"Watching him out here today, he was great. He has definitely gotten better from the time I spent with him at UCLA. I think he is getting better. That is all you can really ask for."

LiAngelo said he has a workout with the Golden State Warriors coming up but isn't sure where his draft prospects currently stand.

"I am not sure what is going on in the draft," he said. "I am just playing my hardest and whatever team thinks that I can produce for them, that is who I am going to play for."

At the end of every draft workout, the Lakers run their prospects through a timed "mentality drill," a grueling exercise that has a player shoot, rebound his own shot and dribble to the other side of the court, then shoot and rebound again and repeat with no rest for a couple of minutes.

"I thought I did good," Ball said. "It was a good workout. I showed that I can knock down shots, get some wins within the 2-on-2s and 3-on-3s. Just show that I can play the game." 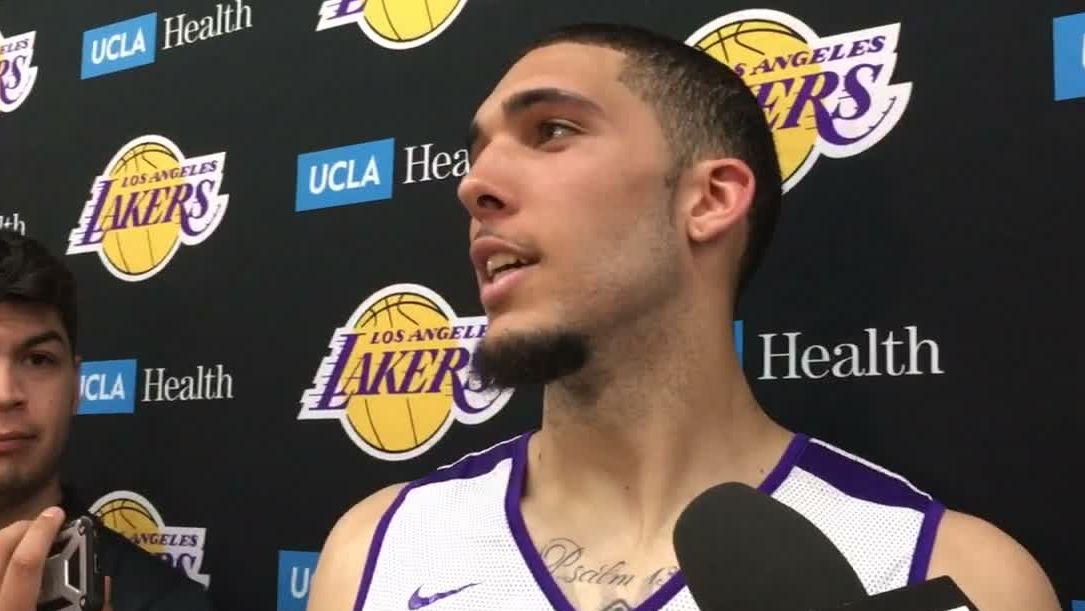 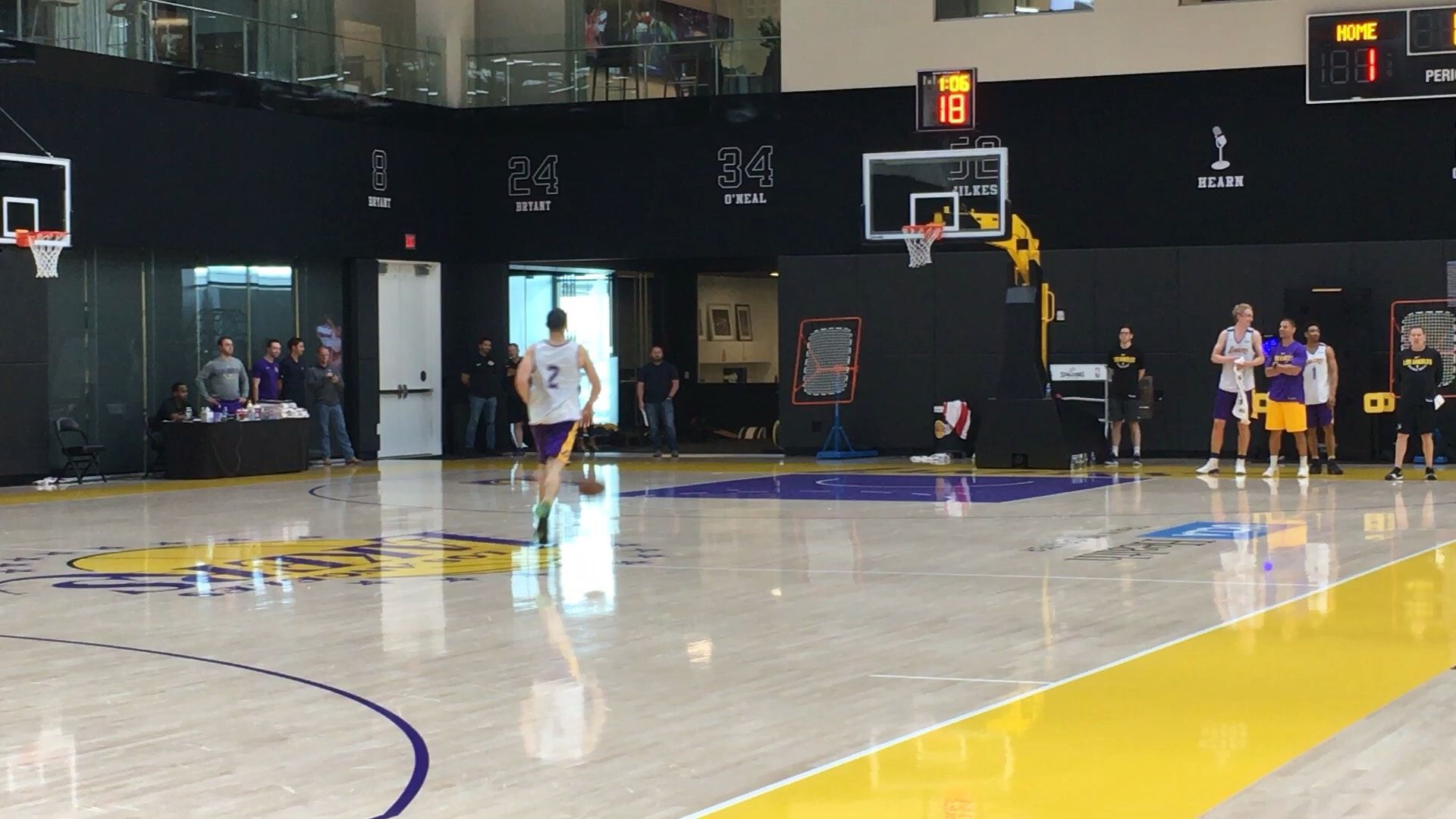