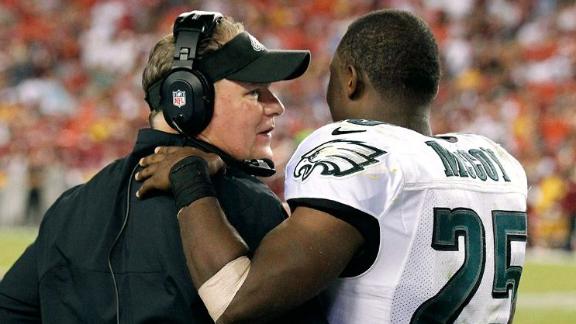 Running back LeSean McCoy says coach Chip Kelly caught the Philadelphia Eagles' attention with the release of wide receiver DeSean Jackson, and the message was clear: Buy in or get out.

Jackson posted career bests in catches (82), yards receiving (1,332) and touchdowns (nine) in his first season playing for Kelly, but he was released in March. Afterward, the Eagles said the three-time Pro Bowler's release was a football decision and not a result of any off-field friction. He has since signed with the division-rival Washington Redskins.

"The whole DeSean Jackson thing, that helped out, to be honest, in making all the other guys aware," McCoy told NFL.com last week for a story posted Monday. "It's all possible. They'll cut one of your best guys if [he's] not buying in.

"On any team -- any team -- you look at that, and as a player, you can look at it from so many different sides, but no matter how good you are, you gotta follow these guidelines. And if you don't, you could be gone . . . You gotta buy in."

With Jackson gone, the Eagles will start receivers Riley Cooper and Jeremy Maclin, who is returning from a torn ACL. Running back Darren Sproles, acquired in an offseason trade with the New Orleans Saints, also is expected to become a major factor in the Eagles' passing attack.