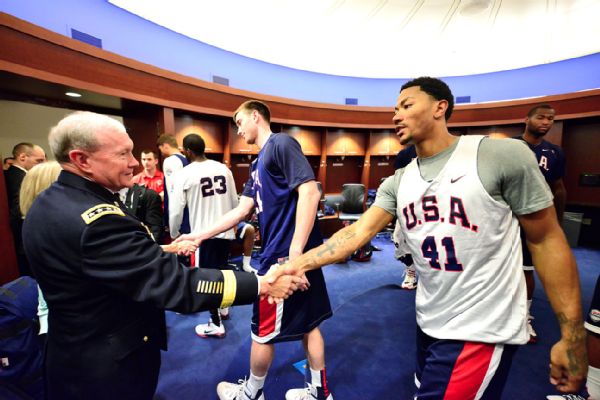 "They are not representing President-elect Trump," Dempsey said on the ESPN/ABC News podcast Capital Games. "They are representing the country where we have a system that stood the test of time with three separate and equal branches of government, representing 350 million people.''

Dempsey is the new chairman of USA Basketball, but he won't have a primary role with the senior men's national team for the next four years.

Outgoing chairman Jerry Colangelo will remain as the managing director of the national team for the next four years and thus work most closely with new Team USA coach Gregg Popovich. Colangelo will essentially serve as the team's general manager.

Popovich, who coaches the San Antonio Spurs, has been outspoken in his criticism of Trump since the Nov. 8 election.

Dempsey said the Team USA coach is the one who has to take a team that is "representative of the country by ethnicity and race and has to pull it together,'' and that Popovich is expressing "concern about how easy it's going to be to do that in the next four years.

"But that's something we've been asked to do.''

Dempsey said the national anthem is appropriate to be played at sporting events.

"It's absolutely the appropriate place to celebrate our country,'' Dempsey said, adding there are other venues to express disagreement and that he doesn't disparage others for making those choices.

Dempsey said he spoke to the men's and women's national teams at the past two Olympic Games and the World Cup of Basketball about what it means to wear the U.S. uniform in that setting.