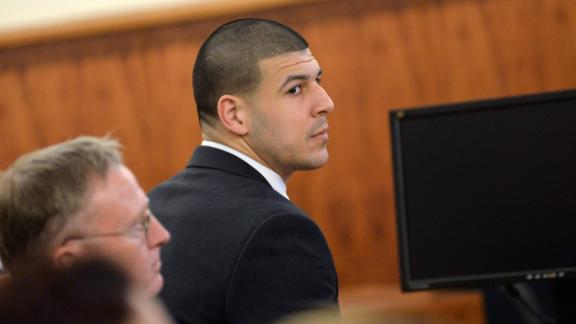 FALL RIVER, Mass. -- Jurors have completed deliberations for a third day in the murder trial of former New England Patriots player Aaron Hernandez, on a day when the judge banned a photographer from a Boston TV station for following jurors to their parking spots.


Jurors have now deliberated for nearly 16 hours. They were scheduled to return to court Friday at 9 a.m. and will end the day early at 1 p.m. due to scheduling issues if they have not reached a verdict by then, Superior Court Judge Susan Garsh said.

Garsh banned Robert Cusanelli of WHDH-TV from the courthouse Thursday.


"He cannot come into this building or be driving a WHDH vehicle for the purpose of doing reporting work on this case," Garsh said from the bench after Cusanelli testified under oath.


Two jurors informed the court Thursday morning that they saw someone watching them in a Ford Explorer. One took a picture of its license plate.


Cusanelli, 54, was questioned in court by a lawyer for the station and acknowledged that he followed the jurors, saying he made the decision to do so on his own to find out where jurors were parking. He said he didn't talk to the jurors, didn't take their picture or write down their license plate numbers and at the time thought he wasn't doing anything wrong.


The station also said in a statement before Cusanelli testified that it "did not approach any juror or talk to any juror. We also did not videotape or take pictures of any juror. We are continuing to work with the court and investigate the situation."


Garsh had said if no one from WHDH testified under oath about what happened, she would ban the entire station.


She also issued a written order that no one shall approach, follow, contact, harass, photograph or take down the license plates of jurors, and then had the order distributed to members of the media assembled at the courthouse.


Jurors have deliberated for three days and, as of Thursday afternoon, had sent six notes asking questions such as clarification about the weapon and ammunition possession charges Hernandez faces, and requesting a list of the 439 exhibits.


Hernandez is charged with the June 2013 shooting death of Odin Lloyd, who was dating his fiancee's sister. Lloyd was found shot six times in an industrial park less than a mile from Hernandez's home.


Information from The Associated Press contributed to this report.