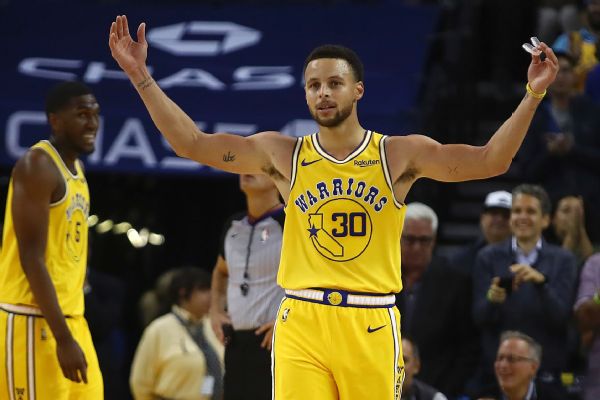 OAKLAND, Calif. -- Golden State Warriors guard Stephen Curry scored 51 points and moved up to fifth on the NBA's all-time 3-pointers list after knocking down 11 treys in a 144-122 win over the Washington Wizards on Wednesday night.

The two-time MVP finished the night shooting 15-for-24 from the field, 11-for-16 from beyond the arc and 10-for-10 from the free throw line, to go along with five rebounds and three assists in 32 minutes of play. Curry did not see action in the fourth quarter.

"I don't even know how to describe what I witnessed tonight," Warriors coach Steve Kerr said. "Amazing. Video game stuff."

Fans at Oracle Arena showered Curry with MVP chants throughout the night as he made the game look easy. Curry tied his career high for points at Oracle, matching the 51 he scored against the Dallas Mavericks in 2015.

"Everything felt in rhythm," Curry said, noting that he knew it would be a special night late in the first quarter. "You start to get good looks, you don't have to force anything to find them and you can just repeat that same motion and it's going in. The crowd gets into it, my teammates are encouraging me. The last 3 in the first quarter is probably the funniest thing I've experienced on the court where two guys on my team are yelling at me from the time I was at the other free throw line like, 'Don't pass it, don't pass it. You better shoot it,' all that type of stuff. I'm hearing that while I'm dribbling down, and it was kind of all the motivation you need just to launch it, and thankfully it went in."

Curry's 31 points in 20 minutes in the first half marked the ninth time in his career he scored at least 30 points in a half, according to ESPN Stats & Information research. Only Houston Rockets star James Harden has more 30-point halves, with 14, in his career.

"It's weird because I couldn't miss from 3," Curry said. "But two of the easiest layups that I've ever had I think in the NBA before, so you just [are] partly frustrated like, 'What could have been?' four or six more points, but at the end of the day, it's just one of those nights you just have so much fun playing the game. Taking some dare shots and obviously trying to sustain it for as long as I'm out there on the floor."

Warriors teammate Kevin Durant said he was the one yelling at Curry to shoot it and forget about passing.

"I was the only one," Durant said, drawing chuckles from the media. "So I need all that credit. ... A professional scorer like that, you're just kind of in the zone at that point. You know exactly where your points need to come from. It was a joy to be on the same court with that. That was sick."

After knocking down his 10th 3-pointer, Curry walked by the Warriors' bench shrugging his shoulders, la Michael Jordan in the 1992 NBA Finals.

"I didn't think about it at the time, but obviously he's patented that move," Curry said. "So any time someone throws up the 'Whatever' [shoulder shrug], his name is going to pop up, as it should. Mine was just I had no explanation for what was going on besides just ultimate confidence and rhythm. Just having fun. I was looking at Quinn Cook because he was looking at me like, 'Yo, what's going on?' And that was my answer."

Kerr had some high praise for his superstar after the 51-point performance.

"I think he's at his physical and emotional peak right now," Kerr said. "Mental peak. He knows the game, it's his 10th year, he knows the league, he knows his opponents, he knows his body. He looks stronger than ever to me. His ability to finish plays in the lane is as good as it's ever been, maybe better. So he's just in a really good place."

After the game, the two-time MVP was open about the fact a performance like that might, indeed, push him back into the award's conversation this season, an honor he would love to earn one more time.

"If you think about guys that have won three. It would definitely be special," Curry said. "And something that I never thought I would have an opportunity to go after. It's more so just on a nightly basis, staying within myself and doing what I need to do. Those conversations will happen just like they did the first two times, and I want to give people a reason to notice what's going on for sure. Especially how we go about it as a team. In terms of everybody, every single night, enjoying each other's success. That's what makes us special, and we want to sustain that over 82 [games] for sure."

Despite all the hype and accomplishments surrounding the defending back-to-back champions, Durant, who won the 2014 MVP, believes both he and Curry still have the chance to win the award again despite the circumstances that usually go against successful teammates.

"Yeah, I think so," Durant said. "If you're just looking at what happens on the basketball court, obviously narratives play a big part. I think the MVP nowadays is the up-and-coming star of the NBA award I think, but it's got to take somebody to do something like this tonight to kind of break through and change that narrative. Players that have been in the league for a while that won a couple MVPs, I'm sure the voters tend to overlook them. Not maliciously, but it's just the fact that they're looking for the next player. But you got to wake them up with games like that. Steph definitely did that tonight, and a lot of players throughout the league this year I'm sure are going to have their moments. Awards are cool if you win, but I don't think anybody in our locker room is really too focused on it."

As Kerr tried to process what he saw on the floor, he couldn't help but chuckle as he described some of what Curry was doing.

"You get a guy taking 40-footers and you're on the sidelines going, 'Yeah, that's a good shot. Good job,'" Kerr said. "Explain that. We've never seen this before."

Curry drains 11 3-pointers in 51-point performance
Steph Curry went off against the Wizards, sinking 11 3-pointers on a 51-point night. He passes Jamal Crawford for 5th all-time in made 3-pointers. 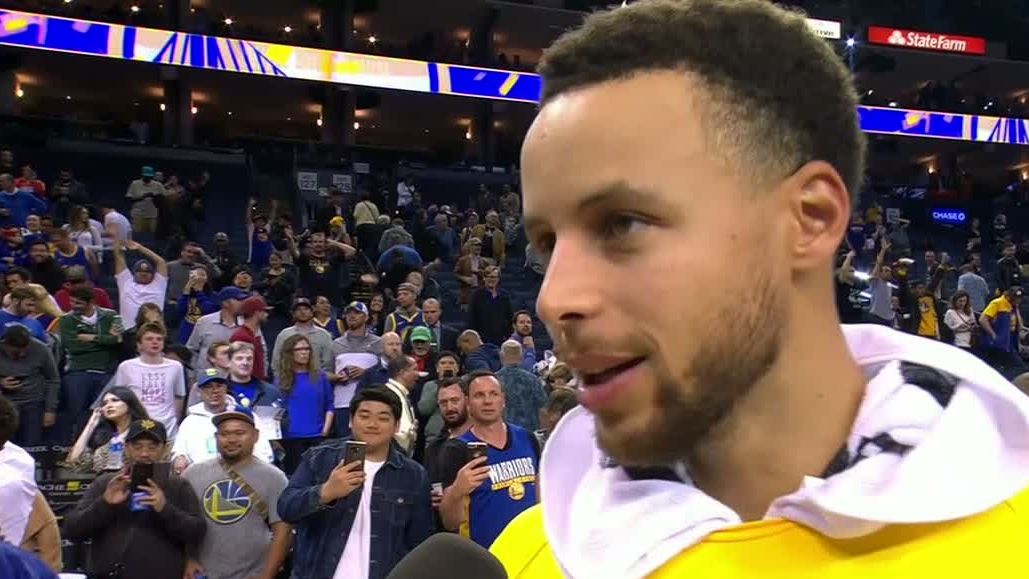