Steph Curry prods Dwyane Wade: 'Are you sure you don't have a couple more years left?' 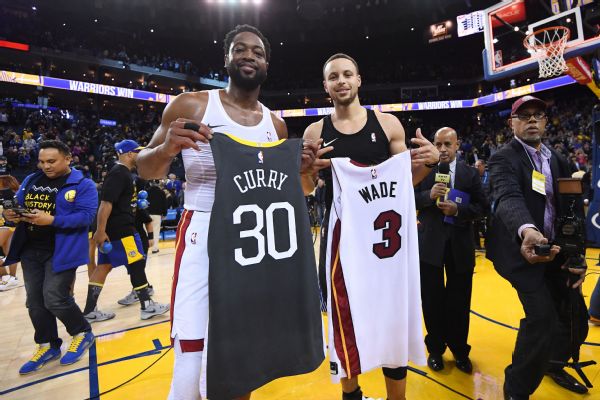 Why are you retiring now?

As has been custom during Wade's farewell tour this season, the Heat guard exchanged jerseys with a player from the opposing team. On Sunday, that player was Curry.

"It seems like he's got a lot more in the tank," Curry said. "That's what I told him after the game. 'Are you sure? I know you got a lot of stuff going on off the court with your family and stuff. Are you sure you don't have a couple more years left in there?' Obviously, with him going to every road arena one more time, it's a different energy for sure."

Wade, who finished with 10 points, received a nice ovation from the Oracle Arena crowd after a short video tribute was played on the video screen. Wade waved to the crowd in appreciation as highlights from his career played.

"Everywhere he's gone, you watch on TV," Curry said. "It's a different energy when he gets the ball. You understand how important he's been to the game throughout his career. No matter who you root for throughout the league, you respect greatness in terms of what he's been able to do throughout his entire career. Tonight wasn't a loud night [in terms of performance], but he had some pretty influential plays."

Curry's comments echoed those of many Warriors players and coaches who were appreciative of the production Wade, 37, has displayed in his 16-year career.

"Everything he has done for that organization, it's been amazing," Warriors forward Draymond Green said. "And yet he's still out there this year playing well. It's good to see a guy, I think if you looked at D-Wade three years ago, you kind of worried, like, 'Ahh is it over?' And he's battled back from that, and it's good to see a guy who's great as D-Wade was close out on a strong note. The way he's playing this year, it's great to see him go out like that. You kind of hate to see a guy limp out of the game, and there are some kids that will see some of these older guys and be like, 'Oh man, he sucked.' No, if you knew that guy five years ago, like -- but that's just the nature of the business we're in. However, like I said, I think D-Wade is playing amazing this year. It's good to see him go out on a high note."

"I'm not surprised," he said of Wade's upcoming retirement. "I wouldn't be surprised either way if he would have kept playing or if he would have retired. He's done and experienced so much in this league, and he's been really good as an older guy with all the younger guys as well. So I think he's invested so much into basketball spiritually and physically that it's just time to walk away and pursue what's next in his life. As a hooper from day one, I can appreciate that about D-Wade, especially battling him in the Finals and throughout my whole career. It's good to see guys go out the way they want to."

For his part, Wade was appreciative of the ovation he received from the Bay Area crowd and seemed to enjoy his last trip to Oracle.

"It was great, man," he said. "It was amazing. They really put some thought into that. Afterward, I said to my teammates that it was dope. It was a great tribute. I appreciate Steve Kerr and the Golden State organization and the fans for the ovation. It was a fun environment to play in." 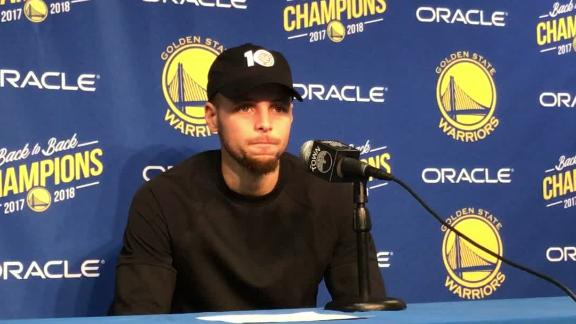 Curry on Wade: 'He's got a lot more in the tank'
Steph Curry says Dwyane Wade could continue playing in the NBA if he wanted to and details Wade's impact on the game. 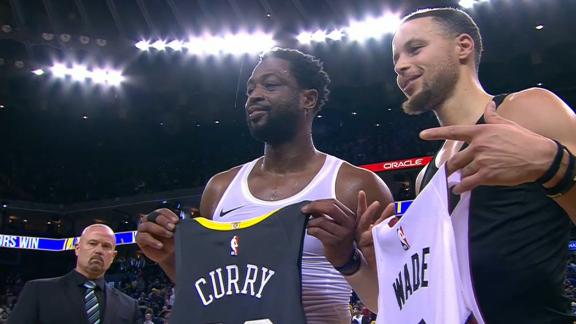