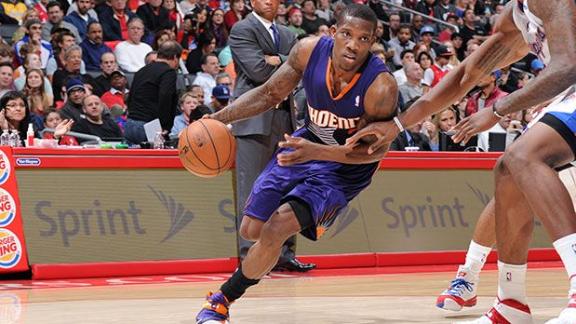 With just hours to go before a planned megadeal that would send Kevin Love to Cleveland, the Phoenix Suns reached out to the Minnesota Timberwolves on Thursday to ask once more about the possibility of acquiring Love in a sign-and-trade for guard Eric Bledsoe, sources told ESPN.com.

The Cavaliers and Wolves have had an agreement in place on Love for weeks, and it remains intact, sources said. That trade, which morphed into a three-way deal with the Philadelphia 76ers that will send Thaddeus Young to Minnesota, is expected to be completed on Saturday.

Talks between the Suns and Bledsoe, who is a restricted free agent, have been fractured for weeks, and the team is now vetting all options. That includes sign-and-trade talks with teams besides the Wolves.

Bledsoe has made it clear he is seeking a five-year, $85 million maximum contract from the Suns. He would consider only a max deal in a sign-and-trade, which would be four years and $64 million, with any other team, sources said.

If Bledsoe, who has remained firm in his salary position all summer, does not get a max deal this summer, he intends to sign the Suns' one-year qualifying offer for $3.7 million and become an unrestricted free agent next year.

The Suns have offered Bledsoe a four-year, $48 million deal that is similar to the contract that point guard Kyle Lowry signed with the Toronto Raptors this summer. Bledsoe rejected that offer, and the sides haven't made any progress in talks for weeks.

Bledsoe averaged 17.7 points and 5.5 assists in 43 games, 40 of them starts, for the Suns last season. He missed 39 games because of a knee injury that required surgery.