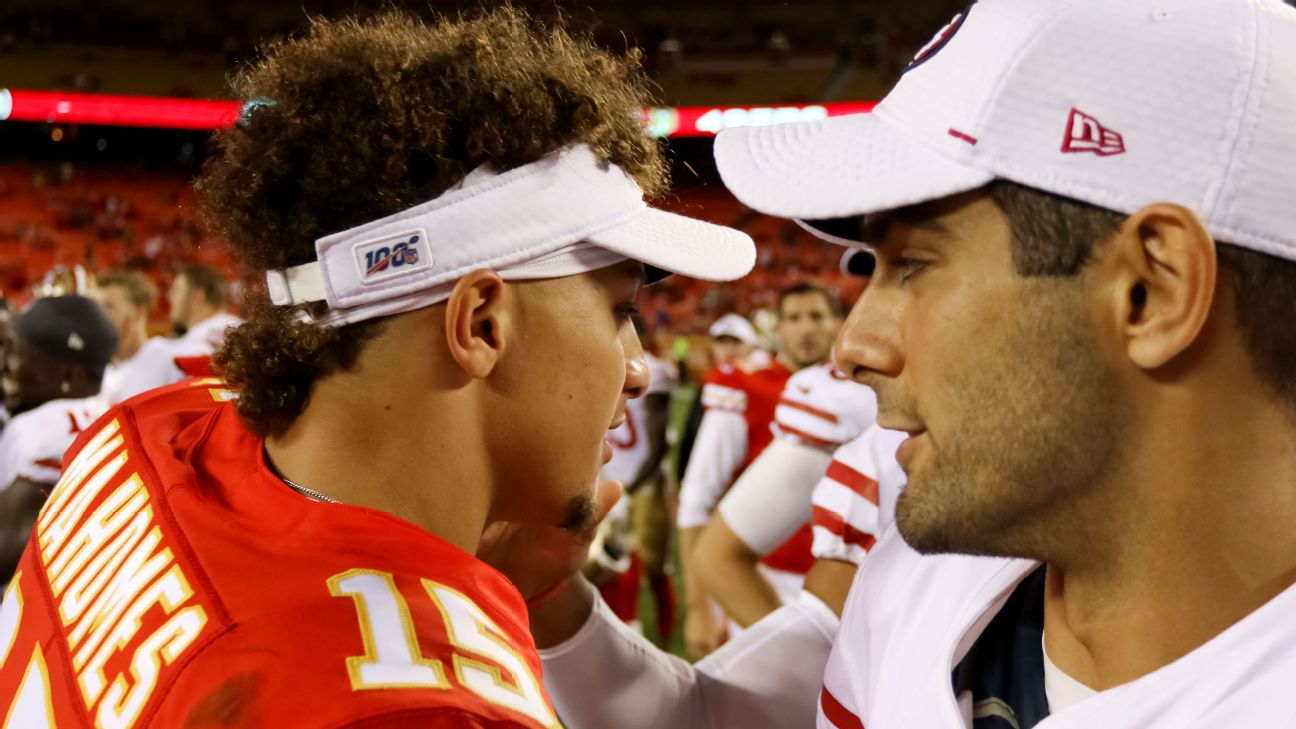 Here's some early advice on Super Bowl LIV: Prepare for a lot of red. The Kansas City Chiefs and San Francisco 49ers advanced Sunday out of their respective conferences, gifting us the NFL's first Super Bowl matchup of teams that employ red as their primary color. (Let it also serve as a reminder that no fact is too minor during Super Bowl hype week.)

A more meaningful fact? It's just the second Super Bowl ever between a team that led its conference in rushing yards and one that led in passing yards (Super Bowl VI was the other). The 49ers rushed for 2,305 yards, and the Chiefs gained 4,498 through the air this season.

Here's an early look at the 49ers-Chiefs matchup, complete with team breakdowns, an X factor, a stat to know and big questions surrounding the final game of the season. Plus, we have early predictions from our experts before the matchup is dissected limb by limb over the next 14 days.

What to know for Super Bowl LIV

Chiefs coach Andy Reid has the seventh-most regular-season wins by a coach in NFL history (207) but is still trying to win his first Super Bowl. His 2004 Philadelphia Eagles lost to the New England Patriots in Super Bowl XXXIX, and Reid hasn't returned since. A win would erase any doubt about his Hall of Fame qualifications and secure his place as one of the best coaches in league history.

But to do so, Reid will need to beat perhaps the one NFL coach -- the 49ers' Kyle Shanahan -- who rivals him as an offensive schemer and playcaller. -- Kevin Seifert

Reason for hope: The 49ers have been in just about every type of game imaginable this season, winning blowouts and nail-biters along the way. But they've never been on the wrong end of a blowout. Even when they aren't at the top of their game, these 49ers find a way to be in it until the final seconds. With an explosive offense, suffocating defense and solid special teams, the Niners play complementary football as well as any team in the league and are unafraid of the big stage despite their relative youth. -- Nick Wagoner

Reason for concern: There simply aren't many weaknesses on this team -- but there are a few matchups that have been exploited at times. Offenses that have the ability to attack the side of the field opposite cornerback Richard Sherman have been a challenge at times, and teams with mobile quarterbacks have given the defense fits, too. (Chiefs quarterback Patrick Mahomes had 53 rushing yards in each of his postseason games this year.) -- Wagoner

The 49ers win if ... they continue to do what they've done most of the year: control the line of scrimmage on both sides of the ball. That allows the pass-rush to create havoc for Mahomes, and the running game -- led by Raheem Mostert -- to dictate the tempo and set up explosive pass plays for quarterback Jimmy Garoppolo. -- Wagoner

Reason for hope: The Chiefs have reason to believe they'll win in every game they're quarterbacked by Mahomes. They're 27-8 with him as their starting quarterback. The eight losses are by a total of 36 points, and Mahomes as a starter has never lost a game by more than seven points. -- Adam Teicher

Reason for concern: For a team with as many great offensive skill players as the Chiefs have, they struggle at times in the red zone. They scored a TD on just 54% of their trips inside the opponents' 20 during the regular season. A failure to finish drives in the Super Bowl would most likely prove costly. -- Teicher

The Chiefs win if ... they rely on Mahomes to carry them. He hasn't let the Chiefs down yet. If the Chiefs play to his many strengths, they'll claim their first Lombardi trophy in 50 years. -- Teicher

Mahomes has been the Chiefs' leading rusher in both 2019 playoff games. There will be plenty of time to celebrate and project Mahomes' passing performance, but his ability to convert first downs and touchdowns via the run has made the Chiefs' offense nearly unstoppable. He is the fourth quarterback in NFL history to rush for at least 50 yards in consecutive playoff games. -- Seifert

Does the Chiefs' defense have one more big game in it?

At this point, it's fair to assume Mahomes and this Chiefs offense are capable of spectacular things, even against the 49ers' fearsome defense. But can Steve Spagnuolo's group, which held NFL rushing leader Derrick Henry to 69 yards in the AFC Championship Game, find an answer to the 49ers' multidimensional run game?

San Francisco tore apart Green Bay on the ground Sunday. If the Chiefs are to deliver Andy Reid his first Super Bowl title, they'll have to find a way to keep the 49ers from controlling the game on the ground and force Garoppolo to try to beat them with his arm. -- Dan Graziano

Is the 49ers' defense good enough to stop -- or at least limit -- Mahomes?

San Francisco took away Dalvin Cook and the Vikings' run game in the divisional round. It neutralized Aaron Rodgers and the Packers' passing game in the NFC Championship Game. San Francisco's defense is loaded up front with first-round picks playing at a high level. Nick Bosa might be one of the few edge rushers in the league who can run down Mahomes from behind when he scrambles.

But can the Niners' front continue its smothering ways against the 2018 NFL MVP and the blistering speed of the Chiefs' offense? It will be the toughest test to date. -- Graziano

It might seem odd to classify the 49ers' running back in this category after his outrageous performance in the NFC Championship Game. But the 49ers are in the Super Bowl for two reasons: their dominant defensive front and their NFC-best running game. Unless veteran tailback Tevin Coleman can return from what looked like a serious arm injury, Mostert will take the lead role in an area of the game that is critically important to the 49ers' success. -- Seifert

Matt Bowen, NFL analyst: Chiefs. Mahomes is a game-changer. And his ability to make second-reaction plays is the reason I'm picking the Chiefs over the Niners.

Mike Clay, fantasy writer: 49ers. The best player in the game will be under center for the Chiefs, but the 49ers have the better offensive line and defense, which gives them the slight edge.

Dan Graziano, national NFL writer: Chiefs. The Niners' defense is scary good, but there's no player, group or force in the NFL right now more dangerous than Mahomes. He won't be stopped.

Kevin Seifert, national NFL writer: 49ers. They have been remarkably consistent all season, and there's no reason to think they'll change now.

Field Yates, NFL analyst: 49ers. There is really only one shot to slow down Mahomes: pressure him. Even that isn't always enough. But it's your best shot, and it happens to be a massive strength of the 49ers. 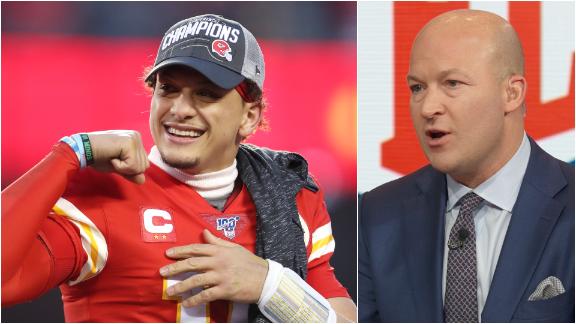 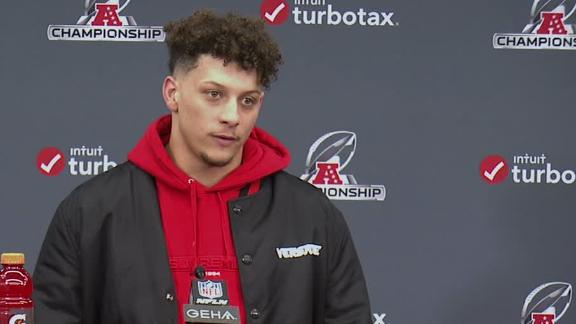 Mahomes: Chiefs need to maintain never give up mentality
Patrick Mahomes expresses his feelings on leading the Chiefs to the Super Bowl and what they need to do in order to win the Lombardi Trophy. 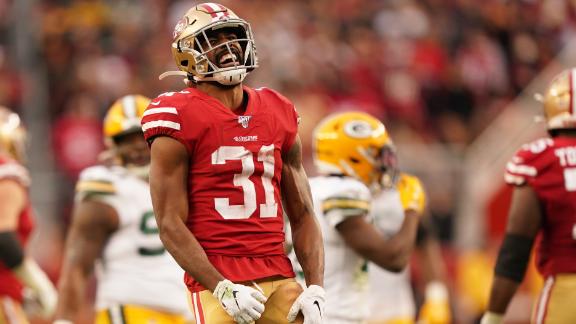