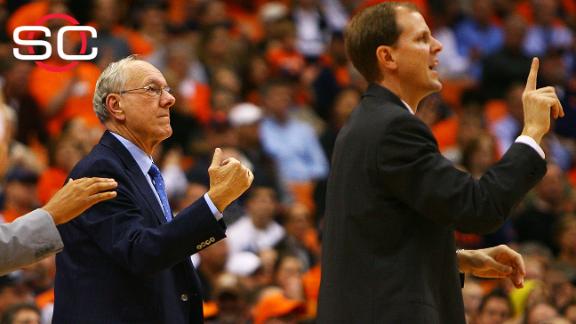 Hopkins is expected to take over after the 2017-18 campaign -- which is when Boeheim said he intends to retire.

"For more than 25 years, Mike Hopkins has demonstrated the true meaning of Orange pride and loyalty," Syracuse chancellor Kent Syverud said in a statement. "He has contributed so much to the success of the Syracuse basketball program. I know Mike is ready to lead the program into the future and carry forward the success that has occurred under Coach Boeheim."

In the statement, the chancellor's office formally announced Hopkins -- a former Orange player and veteran assistant -- as the "head coach designate."

"I'm honored, humbled and grateful for this special opportunity," Hopkins said in a statement. "Very few people are afforded the privilege to coach at their alma mater. I want to thank Chancellor Syverud, the Board of Trustees and Jim Boeheim for entrusting me with this great program. Coach Boeheim has created one of the most preeminent college basketball programs in the country, one that is committed to a standard of excellence and consistency."

Hopkins has been regarded as Boeheim's successor for the past few years, but there was nothing official.

"Mike has truly earned this honor through his hard work, dedication and commitment to our program for more than 20 years," Boeheim said in a statement. "There is no one more ready or prepared to carry on the success of Syracuse basketball than Mike Hopkins."

The news comes despite the recent uncertainty after an NCAA investigation and a change in leadership at Syracuse: Less than a week ago, athletic director Mark Coyle was hired from Boise State.