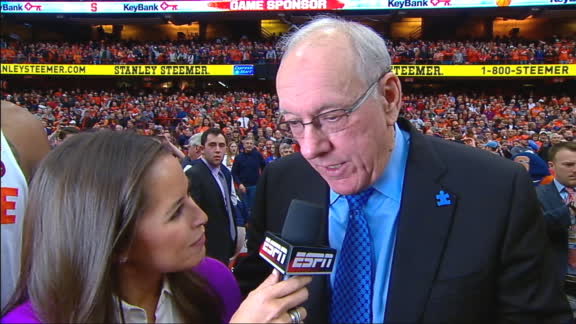 Syracusecoach Jim Boeheim, after winning what would have been his 1,000th career game Saturday, told ESPN he knows how many games he's won -- even if the record book disagrees because of the "crazy" NCAA sanctions that led to his vacated victories.

The Orange upset No. 9Virginia, 66-62, to win the team's 15th game and what would have been the Hall of Fame coach's 1,000th career victory, but the NCAA docked the program -- and Boeheim -- 101 wins in 2015 as part of its sweeping penalties following a decadelong investigation.

"I've been part of 1,000 wins,'' Boeheim told ESPN after Saturday's game. "Whether they're all there or not doesn't matter to me. I've been part of a lot of wins, and I'm really proud of that."

Boeheim said he has fielded a number of calls from friends and coaches across the country, congratulating him on the milestone he technically didn't reach. Had this officially been No. 1,000, Boeheim would have joined Mike Krzyzewski as the only Division I men's coach to reach that marker.

The NCAA deemed in 2015 that the Orange were guilty of various infractions, including extra benefits for several players and academic misconduct involving former player Fab Melo. They classified the penalties as Level I aggravating, allowing for harsher penalties.

Usually outspoken and willing to tackle the NCAA publicly, Boeheim has been reluctant to say too much about the decision to remove his victories. He did call the elimination of the victories "crazy" on Saturday, however.

"People don't realize: It wasn't even academics; it was extra benefits,'' Boeheim said. "They had eight games for Fab. The rest were extra benefits. But it is what it is. We have to try and get through it. That's all we can do.'' 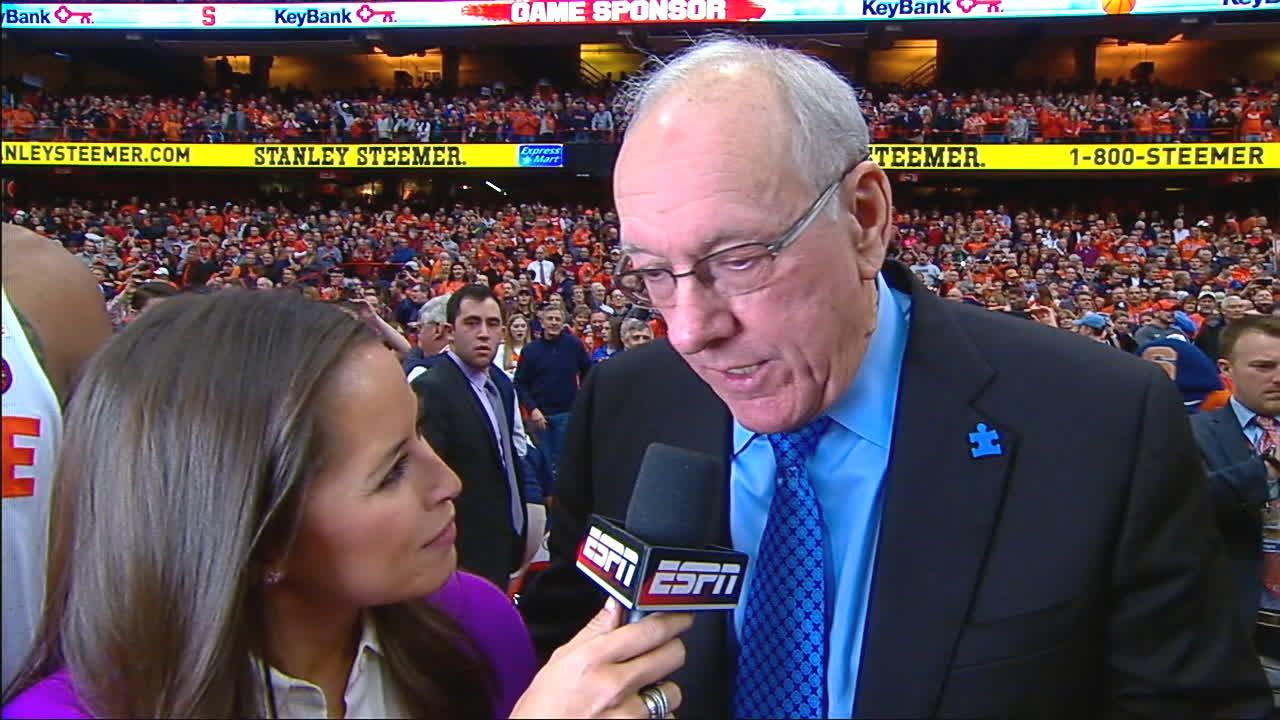 Jim Boeheim proud of huge upset of Virginia
Syracuse's head coach praises the Cavaliers and said this win, which would have been his 1,000th at the school if not for NCAA sanctions, was big for his team.
Related topics:
sportsespn1ncaasyracuse orange000 winscusejim boeheimmens college basketball
Copyright © 2021 ESPN Internet Ventures. All rights reserved.
More Videos
From CNN Newsource affiliates
TOP STORIES