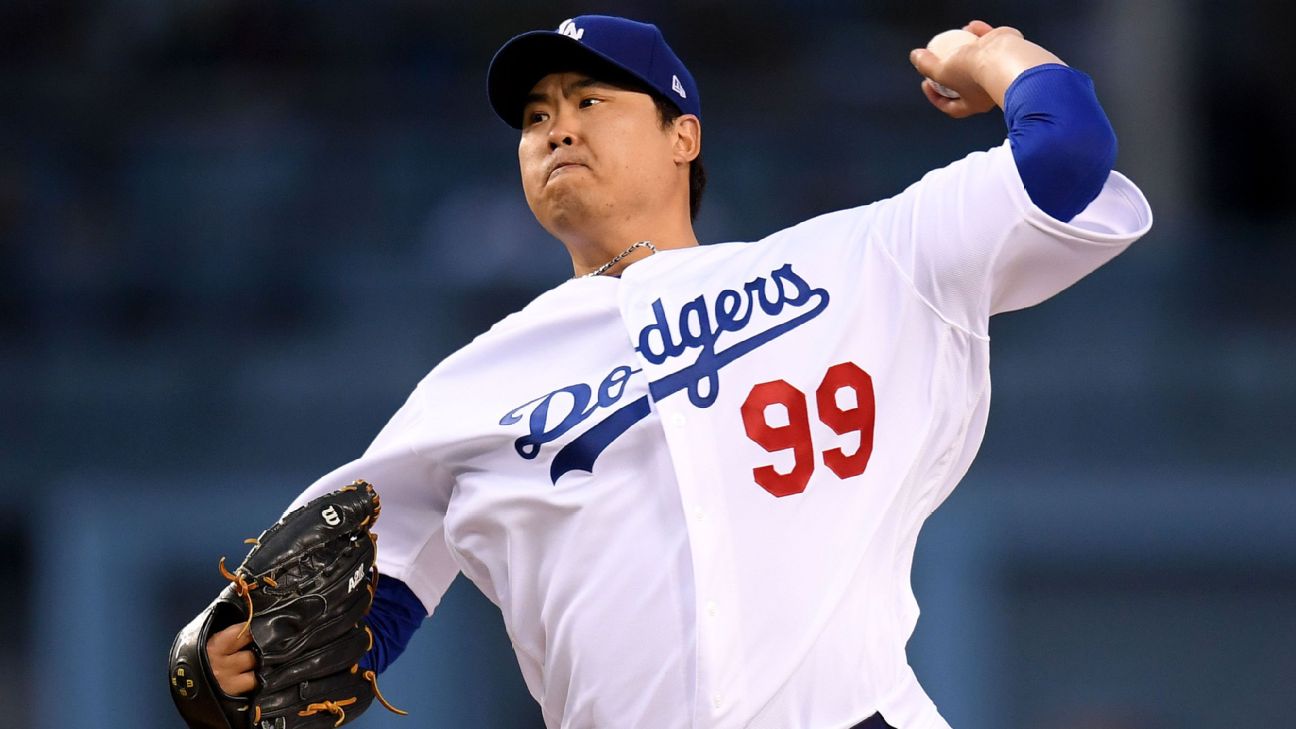 LOS ANGELES -- It took Hyun-Jin Ryu 93 pitches to complete a shutout against the Atlanta Braves on Tuesday night.

On 58 of those pitches, his catcher, Russell Martin, barely moved his glove.

Martin is a veteran of 14 major league seasons. His career has taken him through two stints in Los Angeles, one with the New York Yankees, one in Pittsburgh and another in Toronto, a winding path that has consisted of more than 13,000 innings behind the plate. He was asked if he had ever encountered the type of precision being executed by Ryu, the Los Angeles Dodgers left-hander who consistently gets overlooked.

"Greg Maddux," he said, name-dropping the Hall of Fame right-hander he teamed with briefly on Dodgers teams in 2006 and 2008.

Maddux excelled through an era dominated by offense largely because he exhibited pinpoint control of all his pitches. Ryu is doing the same, while on pace to set a record for strikeout-to-walk ratio. He doesn't possess a pitch as devastating as Maddux's two-seam fastball, but he commands five of them like few others can. And these days, he isn't missing spots, as evidenced by the two walks he has issued through seven starts this season.

"I definitely try to stay on top of it," Ryu said through an interpreter, "because ever since I started playing baseball, that was the one point of emphasis growing up -- to not give up walks."

Ryu carries a preposterous 22.50 strikeout-to-walk ratio heading into his Sunday start against the Washington Nationals, a mark that would set a record -- beating the 20.50 rate attained by a man named Candy Cummings back in 1875 -- if it were to somehow hold. It's early enough for the mere mention of such a possibility to sound ridiculous.

This, however, is not: When healthy, few, if any, have been better than Ryu over these past two years.

His ERA since the start of 2018, 1.99, is the lowest among those who have thrown at least 120 innings in that time. His strikeout-to-walk ratio in that time, 7.88, is the highest by a wide margin. His WHIP, 0.94, ranks third, trailing only Chris Sale and Justin Verlander.

"Very underrated," said Dodgers third baseman Justin Turner, who has often made the point that Ryu might have won the National League Cy Young Award last season had he not spent 15 weeks recovering from a severe groin injury. "I think he likes it that way."

The 32-year-old Ryu speaks a different language and carries himself nonchalantly. He resides in a rotation with one of baseball's most accomplished pitchers (Clayton Kershaw) and one of its most exhilarating (Walker Buehler). And he doesn't possess the wipeout, showstopping stuff to place him in the pantheon of baseball's greatest starters.

Ryu's success is a product of expertly sequencing five pitches -- fastball, cutter, sinker, curveball, changeup -- and throwing them to all four quadrants of the strike zone, a quality Dodgers catcher Austin Barnes considers "pretty unique." Ryu creates deception with his delivery, pinpoint control and near unpredictability in his pitch selection.

Dodgers hitting coach Robert Van Scoyoc spent the 2018 season as a strategist with the division-rival Arizona Diamondbacks and found it almost impossible to craft game plans for Ryu.

"He doesn't have any consistent tendencies," Van Scoyoc said. "He knows how to pitch, he knows how to change speeds, and I think he reads the hitters very well. Even if he has a plan, he'll deviate from it. There's just not anything consistent about how he attacks each guy."

Ryu's fastball tops out at 93 mph, but, as Braves utility player Charlie Culberson pointed out, it appears much faster to an opposing hitter. Culberson teamed with Ryu in L.A. from 2016 to 2017 and made a pinch-hit appearance against him in the sixth inning Tuesday. Right-handed hitters like Culberson always have an advantage against lefties like Ryu because they have more time -- even if only a millisecond -- to read pitches.

Ryu began the at-bat by flipping a curveball Culberson took for a strike. The next offering was an inside fastball at 90 mph, a very hittable pitch in a time when so many pitchers approach 100 mph. Culberson didn't come close to getting his hands around in time. He was jammed badly and grounded into an inning-ending double play.

"A lot of times people might not know how good he is," Culberson said. "Yeah, he doesn't throw 95 miles an hour. But you don't have to. If you can spot up, can mix all your pitches and throw them all for strikes, you're going to be tough to hit."

Injuries have kept Ryu in the shadows. He pitched well in his first two seasons after coming over from South Korea, winning 28 games, compiling 344 innings and posting a 3.17 ERA from 2013 to 2014. But he spent the entire 2015 season recovering from shoulder surgery, returned in July 2016, made one start, got hurt again and underwent an arthroscopic procedure to remove damaged tissue from his elbow.

Ryu stayed healthy for most of the 2017 season. He was good -- 3.77 ERA, 1.37 WHIP, 2.58 strikeout-to-walk ratio -- but not great. What followed was his first healthy offseason in years, which led to a spectacular showing in 2018. This, Dodgers manager Dave Roberts said, is simply the continuation.

The only goal now, Ryu said, is "staying healthy."

"I want to be a pitcher that my teammates can depend on every fifth day."

Ryu's Tuesday start was fittingly deemed a "Maddux," a term for nine scoreless innings with less than 100 pitches. (It was also, fittingly, forgotten after Mike Fiers completed a no-hitter minutes later.) Ryu retired the first 15 batters in order, required no more than 11 pitches to get through all but one inning and fired first-pitch strikes to 24 of the 30 batters he faced.

But there was one pitch Ryu wanted back. It came at the start of the second inning, on a 1-2 count to Ronald Acuna Jr., when Martin asked for a fastball up and away. Ryu left it out over the plate and was fortunate Acuna flied out to the center-field warning track.

When Acuna came up again, to lead off the fifth, Martin called for a full-count cutter low and inside, a difficult pitch for a left-handed pitcher to execute against a right-handed hitter. Ryu spotted it perfectly to strike out the reigning NL Rookie of the Year. For the game's final pitch, against the left-handed-hitting Freddie Freeman, Martin asked for an 0-2 fastball above the strike zone, and Freeman awkwardly swung through it as if it were thrown 200 mph.

It dropped Ryu's 2019 ERA to 2.03, made him one of only seven pitchers to throw a shutout this season, and gave him 24 consecutive innings without a walk.

"He has a great feel for just throwing to the glove and putting the ball where he wants it," Barnes said. "And he does it with five different pitches."
Report a correction or typo
Related topics:
sportsespncharlie culbersonmlblos angeles dodgershyun jin ryurussell martinjustin turner
Copyright © 2020 ESPN Internet Ventures. All rights reserved.
More Videos
From CNN Newsource affiliates
TOP STORIES