The pros and cons of suitors for Bryce Harper, Manny Machado

OK, one more time, let's reset everything and check in with our two favorite free agents. It has been 114 days and counting since Chris Sale struck out Manny Machado for the final out of the World Series. Consider that in the first 100 days of Franklin Roosevelt's presidency, 13 major new laws were passed, including the Emergency Banking Act, the creation of the Federal Emergency Relief Act, the creation of the Civilian Conservation Corps, the creation of the Agricultural Adjustment Administration, and the establishment of the Tennessee Valley Authority. Yet, here we sit, with Machado and Bryce Harper still unsigned (to say nothing of Dallas Keuchel and Craig Kimbrel; rumors on those two are dryer than the Sahara in the middle of a heat wave). Let's review the teams interested in each player.

: Philadelphia is the one team not shy about admitting it can dangle big mountains of cash in front of Harper. The Phillies' current projected payroll, according to Cot's Contracts data, sits at $162.5 million, well below the $206 million tax threshold. But they also have few long-term commitments beyond 2020, with just Aaron Nola, Jean Segura, Scott Kingery and Andrew McCutchen signed for more than two seasons. From a baseball standpoint, the Phillies were also just 11th in the National League in runs scored, and their right-handed-heavy lineup could use a lefty masher.

: Harper might just not want to play in Philadelphia.

: The Giants not only are desperate for an outfielder -- their current group of fourth and fifth outfielders on the 40-man roster projects for a combined 1.6 WAR, worst in the majors -- but they need a new anchor to build around as the Buster Posey/Brandon Crawford/Brandon Belt core continues to age. According to weighted runs created, which adjusts for park effects, the Giants had the worst offense in the majors in 2018. The Giants haven't had a 20-homer guy since Crawford in 2015 and haven't had a 30-homer player since Barry Bonds in 2004.

: Oracle Park, the stadium formerly known as AT&T Park. It's maybe the toughest home run park for a left-handed hitter in the majors. Does Harper really want to go there and watch his fly balls melt on the warning track? Consider that Belt has 42 home runs at home in his career and 70 on the road, and Crawford has 32 at home and 55 on the road. No, they aren't the power hitters Harper is, but Harper is going to have trouble putting up big numbers there.

: They're young, they're building for the future, it's an easy hop to Harper's hometown of Las Vegas, the weather is great and the media coverage will be less intrusive than if he joins a big-market team. Plus, maybe he likes brown.

: Maybe he doesn't like brown. The Padres might have a bright future, but they're still in a division with the Dodgers and haven't made the playoffs since 2006. Are they really going to outbid the Phillies? If this group of prospects doesn't pan out, Harper could disappear into no man's land, playing late games on the West Coast that nobody outside of San Diego will be watching.

: The comfort level of staying in Washington has to be a factor, especially if the money is close to other offers -- assuming, of course, that the money is still on the table. The Nationals have spent big this offseason on Patrick Corbin and others and also will try to extend Anthony Rendon -- who, you know, might actually be the better player, if less famous. It seems possible that if the choice is between the Phillies and Nationals, why wouldn't Harper want to remain in D.C.?

: The Nationals' public suggestion that they made a 10-year, $300 million offer was really just a smokescreen and they never had any intention of bringing him back. Plus, they might have one of the best outfields in the game without Harper in Juan Soto, Victor Robles, Adam Eaton and Michael Taylor.

: Philly makes the highest offer, but Harper doesn't really want to go there. The Giants decide they need to rebuild. The Padres were hoping to get him only if the price was low enough. The Nationals ... meh, they decided to give long-term money to Rendon. That leaves the mystery team, maybe on a shorter-term, higher annual average. It could be anybody. It could be ... the Yankees. Because Harper is still a perfect fit for Yankee Stadium, and they could easily rotate him, Aaron Judge and Giancarlo Stanton between the two corner spots and DH without any issues.

: Harper really, really likes brown. And only one team is switching to brown uniforms in 2020.

: See above. The Phillies want a superstar. They've locked up ace Aaron Nola. They have rotation depth. They have a new shortstop in Jean Segura and a good power hitter in Rhys Hoskins. But they haven't finished above .500 since 2011. This regime under Matt Klentak and Gabe Kapler needs a winning season. Machado will help get them there.

: Not Maikel Franco. Most likely because Machado doesn't want to play in Philly, either. Maybe he takes a short-term deal from the Yankees, sacrificing a larger, long-term payout for a chance to play in New York.

: The White Sox are itching to be relevant again after six consecutive losing seasons. It's clear they're interested in Machado, and Ken Rosenthal just tweeted they remain a "strong factor" for Machado's services. They need a third baseman. I mean, of course they do. Have they had a good one since Robin Ventura? To be fair, they need a lot. They lost 100 games last year. Maybe without any other offers he's really enamored with, Machado elects to return to the American League and join brother-in-law Yonder Alonso and buddy Jon Jay on the White Sox, where he becomes the marquee player on a team in a big market.

: Did we mention the Sox lost 100 games? They have some kids coming, but there's no guarantee this club is going to turn things around in the near future. Plus, the rumored offers from the White Sox seem to be well short of what Machado can get somewhere else.

: One report had the Padres offering Machado more than $240 million, maybe as much as $280 million. That would seem to easily trump what the White Sox were reportedly offering. If it's between the Padres and the White Sox, the Padres can also sell Machado on having a better farm system. Maybe the Padres even dangle playing shortstop (with top prospect Fernando Tatis Jr. moving to third base when he's ready for the majors). Or imagine this: The Padres sign Harper and Machado on the same day and they become best bros and lead the Padres to five straight NL West titles.

: Machado is from Miami and might prefer a home closer to the East Coast. The home parks for the Phillies and White Sox are terrific home run parks, while Petco isn't, and don't underestimate that selling point to a home run hitter. Sign both Harper and Machado? And switch to brown uniforms? Don't tease us, Schoenfield.

: It's the Yankees. They find a $(*#!@! way to make these things happen. Plus, Machado wants to play there.

: The Yankees actually are happy with Miguel Andujar at third base. Plus, they're really saving their money for next offseason, when Nolan Arenado, Paul Goldschmidt, Xander Bogaerts, Gerrit Cole, Justin Verlander, Chris Sale and J.D. Martinez are all potential free agents.

: Because some team will suddenly realize, "Hey, you know, maybe we could use a 26-year-old guy who can play shortstop or third base and has averaged 36 home runs, 5.8 WAR and 159 games played the past four seasons." 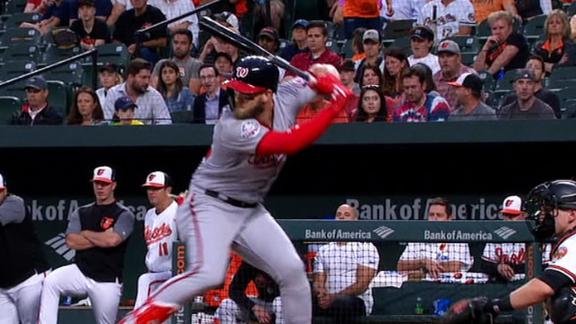