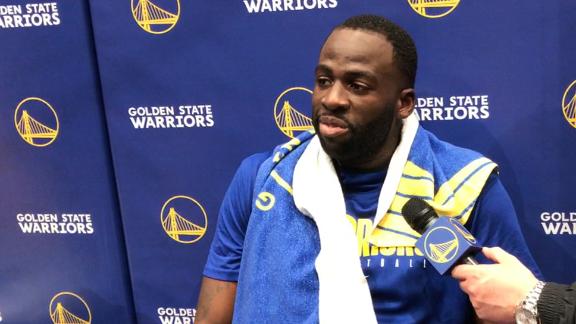 The Golden State Warriors get an opportunity to share in a homecoming of sorts for Glenn Robinson III and Alec Burks when they host the Philadelphia 76ers on Saturday night.

The salary cap-handcuffed Warriors signed Robinson and Burks as free agents over the summer in an attempt to replenish a roster that had undergone major changes in the wake of the team's fifth consecutive trip to the NBA Finals in June.

The veterans turned out to be two of the best bargains of the offseason, with Robinson averaging career-bests in scoring (12.9) and rebounds (4.7) for Warriors, while Burks did the same in scoring (16.1) and assists (3.1).

The much needed production didn't help the Warriors win many games without Kevin Durant, Klay Thompson, DeMarcus Cousins, Andre Iguodala, Shaun Livingston and, for the most part, Stephen Curry. But the impressive production caught the eye of the depth-shy 76ers, who not only sent the Warriors three future second-round picks for the duo, but also gave Golden State financial relief that could help it moving forward by virtue of avoiding the NBA's repeater tax this year.

Robinson and Burks didn't have an immediate impact after the trade deadline last month, but things appear to be changing.

Robinson exploded for a season-best-tying 25 points in Tuesday's showdown against the Los Angeles Lakers, while Burks has heated up over the previous three games, scoring in double figures in each while averaging 14.7 points and totaling seven 3-pointers.

The 76ers lost to the Lakers, as well as to the Los Angeles Clippers, to begin a four-game Western swing. But Robinson and Burks combined for 22 points off the bench Thursday night in a 125-108 win at Sacramento.

"Just go play with an extra little chip on our shoulders (and) have fun with it," Robinson told reporters in Sacramento of his first trip back to San Francisco. "No disrespect. Not hard feelings. It's just going to be cool to go against some of the guys we have been practicing against and playing with all year."

One of those players is Curry, who was playing alongside Robinson and Burks in the fourth game of the season in October when he broke his left hand.

The two-time NBA Most Valuable Player missed the next 58 games, and finally got the green light to return in Thursday's 121-113 loss to Toronto, the Warriors' 10th consecutive home defeat.

He didn't shoot particularly well (6-for-16 overall, 3-for-12 on 3-pointers), but did manage 23 points and at least a couple of the deep 3-pointers that have become his trademark.

"Excited to be back out there," he assured the media afterward. "We had some good moments. Obviously, Toronto is a championship team that has a lot of chemistry and they know how to win. For us it was a good step in the right direction, everybody just competing, and we can build off of this."

The Warriors and 76ers met in Philadelphia in January, with the 76ers coming away with a 115-104 win.

Robinson (20) and Burks (12) combined for 32 points for the Warriors in the loss. D'Angelo Russell, also dealt by Golden State last month, contributed an additional 28.

All-Star center Joel Embiid, who had 24 points and 10 rebounds for the 76ers in the earlier meeting, has been ruled out of the rematch with a shoulder injury.

The 76ers hope to get back guard Josh Richardson, who missed the Lakers and Kings games with a concussion. All-Star point guard Ben Simmons remains out because of a nerve issue in his injured back.

Draymond has some harsh words for Charles Barkley
Draymond Green says that Charles Barkley is not qualified to talk basketball with him and adds that Barkley should stop talking before he takes his job.
Report a correction or typo
Related topics:
sportsespngolden state warriorsphiladelphia 76ersnba
Copyright © 2020 ESPN Internet Ventures. All rights reserved.
More Videos
From CNN Newsource affiliates
TOP STORIES