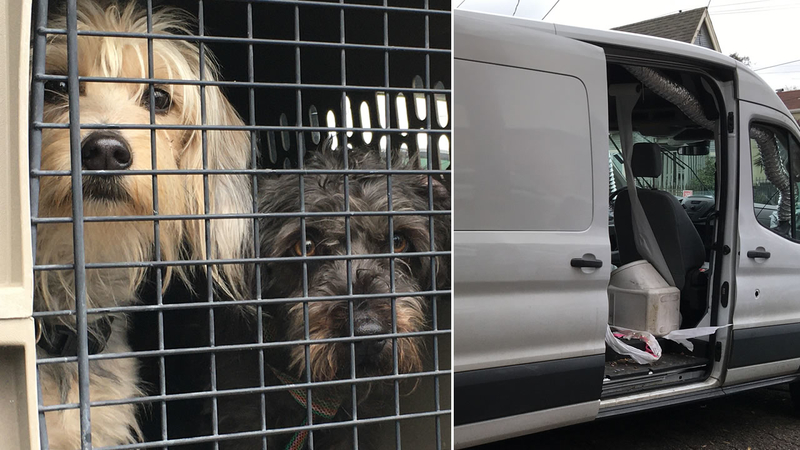 Stolen van with 24 dogs inside recovered in Oakland

FREMONT, Calif. -- Oakland police have confirmed they have located a cargo van that was stolen overnight in Fremont with 24 dogs inside.

They were a bit agitated and some were shaking, but the more than two dozen stolen dogs appeared to be in good shape as they were recovered in Oakland.

"I gave the officer a big hug," said Julie Bingham, the owner of the van and part-owner of D & J Pet Transport out of Florida. Bingham said she wasn't entirely relieved yet. "I will be when I see the dogs and I know that they're all there. I just don't know if they're all there yet."

Bingham reported the dogs and the van stolen Monday morning after realizing it was missing from the parking lot of the Extended Stay she stopped at overnight.

Bingham say she was on the second leg of a trip that started in Florida, wound up the East Coast, and through the Midwest before making it to California.

She said she just dropped off a dog in Sunnyvale late Sunday before getting tired and looked for a place to rest.

#HappeningNow @oaklandpoliceca say the guy who allegedly stole van full of rescue dogs was driving around trying to sell them...three of them are missing. 27 others safe and sound. #abc7now pic.twitter.com/uTdNQg6lKe

"I came and checked on the dogs again, opened the van up again and made sure everyone was doing good, everyone was sleeping. I locked the van again, checked all the doors to make sure they were locked. I went in and slept maybe three or four hours, packed my stuff, came out to leave and then it was gone."

She said the van must have been stolen somewhere between 11 p.m. Sunday and 3 a.m. Monday morning while she was sleeping.

Typically, Bingham said she would stay in the car and sleep with the dogs on an air mattress, but because of the number of dogs she was transporting at the time there was no space, so she got a hotel room overnight.

She said she left the van parked in the parking lot with the car and ventilation system running so the dogs got some air and the van was temperature controlled.

Police say investigators tracked the van's movements from an Extended Stay in Fremont with the vehicle's built-in GPS before it finally stopped in the area of 81st Avenue and Olive Street in Oakland.

"We were able to ping the van and the location of the van, so officers were searching the area to rescue the dogs," said Lt. Bryan Hubbard with the Oakland Police Department.

Oakland police arrested the alleged thief and recovered 24 dogs, along with the van, which was dirty and disheveled, but otherwise intact.

Police say the suspect was actually driving the stolen van around town, trying to sell the dogs out of the back.

The second man detained by police told ABC7 News he was just trying to buy one.

"The dude drove up trying to sell me a dog," said the man. "I tried to buy a dog and, next thing I know, the police came."

The suspect will face a variety of charges, including auto theft, grand theft and possession of stolen property.

#DEVELOPING The owner of the stolen van just showed up and is in tears that her dogs have been found safe. Police say they think 3 may be missing...that the guy who stole the van was driving around trying to sell them. #abc7now pic.twitter.com/TAi6Kjjx5Q

#DEVELOPING Owner of dog transport van from Florida explains what happened last night when she left the van—locked and running—outside a Fremont hotel, when a thief made off with it. 27 dogs and van recovered early this morning in #Oakland https://t.co/GQyB8EXsiQ pic.twitter.com/SF64zCriRu

#DEVELOPING @oaklandpoliceca have at least one suspect in custody for theft of van in Fremont that carried two dozen dogs. The dogs have been located and are being taken into the care of animal control until owner arrives. #abc7now pic.twitter.com/kdNGXAbbv9

JUST IN: Stolen van with approximately 25 dogs found in #Oakland per PD. It’s unclear if all of the dogs have been located. Update coming up on @abc7newsbayarea pic.twitter.com/fwhRUZZe0i