'We were all very lucky': Good Samaritans save family from floodwaters 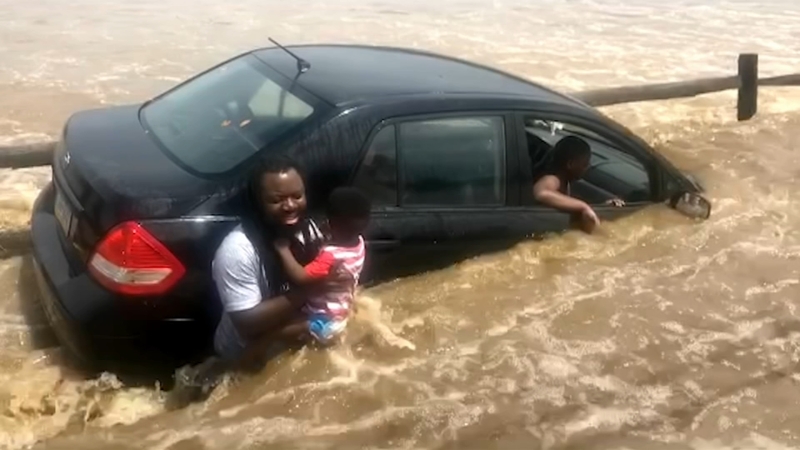 Four strangers, turned good Samaritans, saved a father and four children from a sinking vehicle as the floodwaters continued to rise.

The video, taken outside of Philadelphia, is heart-racing, and shows the true bravery of everyday heroes.

"You can see how strong the river is and it's pulling them away," says Dan DiGregorio, one of four strangers who rushed in to save them. "Honestly, out of nowhere, this backhoe comes around the corner and we immediately started screaming at the guy driving it."

That's when the group moved in to help.

"We're yelling at the dad, who's now about 15 feet away from the car with his baby in his arms. He's almost going under. So, we tell him get back to the car," DiGregorio said.

The four strangers made a human chain, holding onto each other's belts, to get the family members out, one by one.

The oldest child almost slipped away, but DiGregorio was able to grab him by the wrist.

"Even last night, I couldn't sleep because I can still see the fear in his eyes as I'm holding on to them. Because if I let go, he's gone," he said. "We were all very lucky. I mean, it wasn't smart by any of us, but it was something that had to be done as soon as possible."

After two teenage girls fell into the water while taking pictures during Hurricane Hanna, four surfers helped rescue them. Press play to see images of the rescue.

"None of us knew each other," he says. "We were from everywhere, from different countries. Who cares who we are? Everybody's family and everybody needs to take care of each other."

They are now are looking for the family to check in.

A Philadelphia man is being hailed an "instant hero" for his quick work rescuing a woman who was drowning in the water at the beach in Wildwood.