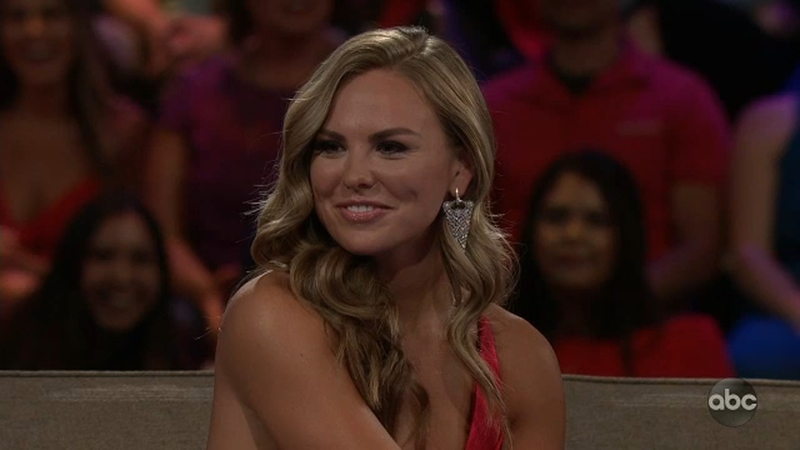 Catch up on the biggest moments of 'The Bachelorette' finale

NEW YORK -- The show began with an ominous message from Chris Harrison where he said that we would see a cringe-worthy proposal. It wasn't a very promising start. The finale showed the guys picking engagement rings for Hannah with Neil Lane, and Hannah preparing for her big decision. She said she wasn't sure as she rode to the decision location and said that she couldn't do it. Then it was the scene we saw in the promos where she gets out and falls in the street. She just said again that she couldn't do it, and she had scraped her elbow in the fall. A producer helped her back up and she stood outside for a bit and got her courage back.

At the podium sat the final rose. It was a beautiful setting, and on his way there first was Tyler. I think most people thought he would be the better choice for Hannah. Poor Chris Harrison had to keep a straight face knowing that Tyler was about to be dumped as he led him to Hannah. Tyler started talking first and it was beyond sweet. He told her that she captivated his soul and that she made him the man he was meant to be. He told her that he was madly in love with her, and he started to describe their love story and Hannah interrupted him. She shook her head, and he said, "This isn't it?" He looked incredibly shocked. Hannah took a deep breath and told him how lucky she was to be loved by him and to feel that. She told him that she loves someone else...and said she was sorry. "I'm still going to be your biggest fan rooting for you, I'm wishing you and Jed nothing but success and I really mean that," Tyler said. Seriously Hannah!!! Tyler said, "I thought this was it, it feels like a million uppercuts to the gut."


Next, Jed arrived carrying his guitar. You have got to be kidding me. He started off that he loves the way that she makes him feel and that he never thought he could fall in love with someone this fast. Jed said that he knows he loves her, and that talking is hard sometimes for him - so he played her a song he wrote for her. Hannah cried and gave him a little clap. She told him that she doesn't have a song, but she'd "like to say some stuff." Hannah talked about how she prayed for her future husband and wondering what their life was like and what their passions were. She said that she'd been "praying for this moment for a long time and praying for you." Jed got down on one knee and proposed and Hannah said, "Yes!" Last but not least, she gave him the final rose.

And we really like that @AlabamaHannah smile! 😍 #TheBacheloretteFinale pic.twitter.com/W7QzsTBRjl

Chris Harrison said, "What happens next is a story of broken promises and broken hearts." Aw! Poor Hannah! Hannah and Jed seemed happy those first days in Greece. Hannah said that they had a lot of fun together at first. The second night they were engaged, Jed revealed to Hannah that he had a girlfriend right before he left for the show but it was over. Then she found out in People magazine that it was a quite different story, and that he never really ended the relationship. Hannah couldn't handle all of the misinformation and said, "It wasn't what I said yes to."

Then we see Jed arriving to meet Hannah at a house where they greeted each other with a hug. Jed told her he missed her, and Hannah said nothing. She asked why he waited the whole time before telling her the truth. Jed thinks that there are two different views of what actually happened. Jed said it never seemed exclusive or like a relationship to him. He said he spent the most time with her, but was still dating other people. Jed revealed that they took a trip together, just the two of them, but he was still hooking up with other people. She met his parents because they were nearby. She threw him a surprise party and gave him a trip to the Bahamas. Hannah said, "But you don't call that dating?" Jed said that it was just a music thing in the beginning and he said the same to that other woman, and he even told her that he loved her before he left. Hannah called him selfish. "I ended it in my heart and not verbally," Jed said. Hannah did not buy that one bit. He said, "I didn't know until I met you." Hannah said it's been humiliating and she even got texts of pictures of girls in his apartment. She couldn't believe that he had girls over and didn't tell her afterward.

Jed tried to beg his way out of it. He asked her how he could grow or not be lacking. Hannah said what she needs is 100% honesty. He said he should have said something during the fantasy suite, but he said he couldn't think of anything else but her. Jed said he was afraid to lose her, and he was a coward. Hannah said that she was upset that he told his friends that "he won." He didn't say he got engaged, he said he "won." She said that it made sense the way his family reacted towards her. Hannah felt like he got home and fell back into his old ways and old life. "I feel like this experience has been taken away from me," Hannah said. She said she was given half-truths and she didn't get to see all of him. He said that he wants to be married to her and then he apologized and said he was sorry a few dozen times. She took off her engagement ring and put it on the table. He couldn't talk his way out of it, and Hannah said she didn't know if she wanted their relationship anymore.

Back on the live show, Hannah came out to sit on stage and talk with Chris Harrison. Hannah was visibly upset. She announced that she wasn't with Jed anymore and the crowd gave her a round of applause. Chris Harrison told her he was sorry because he could see the hurt in her eyes. To just dig the knife in deeper - Jed came out on stage and the crowd gave him a few random claps. It was super awkward. I do give him credit for showing up! He apologized to Hannah again and this time it was a real, sincere apology. Hannah told Jed that she appreciated his apology and she felt for him that he's dealing with all of the criticism he's getting now. He added that he'll always be in love with Hannah. She said she's not trying to punish him, but her feelings have changed and she said that when the trust was broken her feelings really just were broke with that. "I don't love you like that anymore," Hannah said. You can't start a relationship on lies.

At long last, Tyler finally got a chance to come out on stage. Tyler said the breakup was hard for him and he said that he actually really enjoyed watching how powerful and strong she was on the show. He thought that she would be in good hands with Jed and it was hard for him to see that things didn't work out for them. He added that he knows Hannah will bounce back. Hannah admitted to having some feelings towards Tyler and told him he's "an incredible guy and she's a single girl..." The crowd went nuts. She asked him to go for a drink and hang out and Tyler said, "I'd love to, just tell me when." Chris Harrison promised to send a date card. Hannah said they need to be normal people and hang out and have a drink and catch up. So, there might be hope for Hannah and Tyler! YAY! Let's hope the second time is the charm for them - reminds me of when "Bachelor" Jason asked Molly out for coffee after breaking up with Melissa.