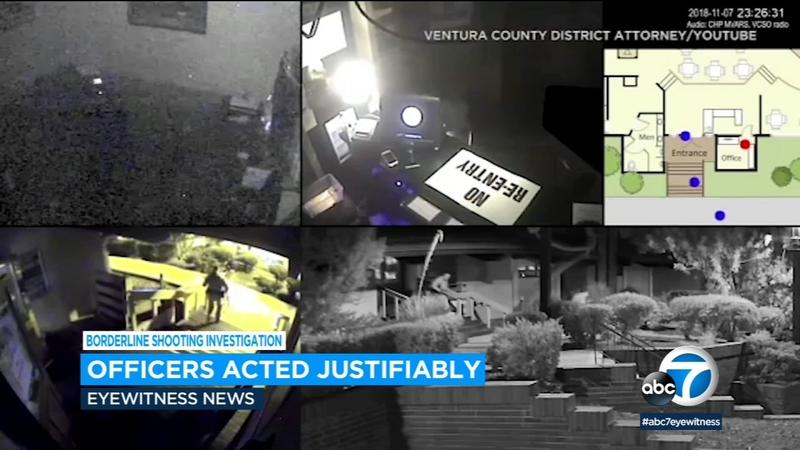 THOUSAND OAKS, Calif. -- The Ventura County District Attorney's office released a report Thursday that provides the most detailed timeline of events of the mass shooting that unfolded at the Borderline Bar and Grill in Thousand Oaks two years ago, including details regarding the death of a sheriff's sergeant who ran in to face the danger.

Ventura County Sheriff's Sgt. Ron Helus, who was accidentally shot by a fellow police officer as they responded to the Nov. 7, 2018 shooting, had tripped and fallen during the chaos and was struck by the fatal bullet when he stood up to retreat, according to the prosecutor's report.

The report finds that the officers - Helus and California Highway Patrol Officer Todd Barrett - acted justifiably when they fired their weapons.

The suspect, Ian David Long, killed 11 people before fatally shooting himself that night.

For the first time, new surveillance video shows the officers enter the bar when the mass shooting started.

The suspect is seen in the video hiding in an office ready to ambush the responding officers. The report says he had a "substantial tactical advantage" over the officers.
The Borderline Bar and Grill was packed that night. The report says that within a minute after the two officers went in, the suspect started firing at them.

Pepperdine student Alaina Housley was the youngest of the 12 victims who lost their lives during the Borderline shooting one year ago. Her parents want others to remember Alaina as they did - as someone who brought joy and elegance to the world.

Barrett was able to get out the front door and Helus was close behind him, but he stumbled and fell. That's when Barrett started to return fire and accidentally hit Helus. Helus was mortally wounded but he still grabbed his rifle and prepared to confront the shooter if he walked out.

Barrett "honestly and reasonably believed" that he and Helus, along with another responding officer, highway patrol Officer Lidia Espinoza, faced imminent threat of death or great bodily injury when they responded to reports of gunfire at around 11:20 p.m. that Wednesday, the report said.

Prosecutors concluded Barrett's and Helus' use of deadly force against Long was justified as a lawful act of self-defense and defense of others.

In addition, Barrett's accidental shooting of Helus was justified and not criminal, the report found.

The report says it was an extraordinary act of heroism for both Helus and Barrett to enter the building not knowing where the suspect was hiding.

The district attorney's investigation is the first official report to be released on the shooting. Still pending are the sheriff's office review of the law enforcement response and homicide detectives' in-depth investigation of the incident.