Investigators estimate at least half a million dollars in damage to the two houses.
KFSN 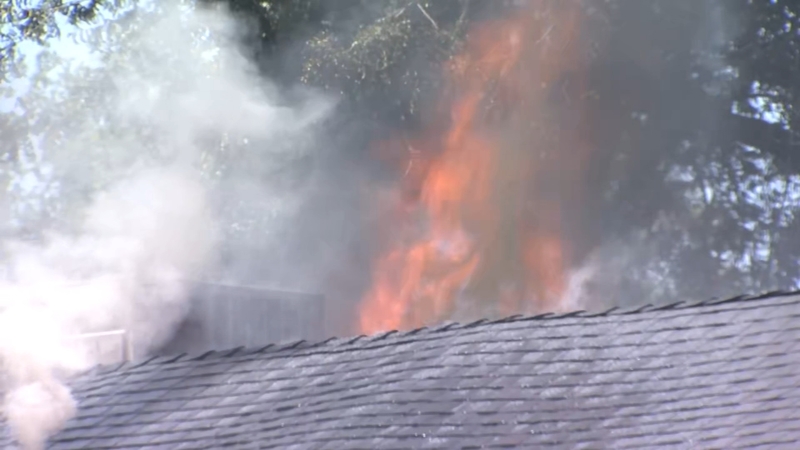 Flames shot out through the roof, sending large plumes of smoke into the air.

Crews from Clovis Fire as well as Fresno Fire were fighting it together.

They said the fire started at about 1:30 in the backyard of one home, and turned into a two-alarm fire.


Trent Anderson lives in the first home, and says he was inside, but didn't know there was a fire.

"I was playing Minecraft and someone burst onto the door, and said you have a fire going on in your backyard. I went out back and saw the whole shed engulfed in flames," he says.

The flames soon spread to the home, and a nearby tree, ultimately reaching the house next door.

The triple-digit heat posed a challenge to firefighters.

But heat didn't stop firefighters from saving two dogs they learned was inside the destroyed home.

They were able to find the dogs alive and in their crates.

They treated them before reuniting them with their homeowner.

It was an emotional & heartbreaking moment when Clovis firefighters rescued 2 dogs from a home that was just destroyed by fire.The dogs were found safe in their kennel and are being treated. The homeowner tearfully reunited with her dogs, before she saw her home was gone. @ABC30 pic.twitter.com/InzzCxgngS

Lindsay Perales was in shock at the sight of her home destroyed, saying she and her fiance had just moved in.

But she was thankful firefighters saved her dogs.

"I'm so grateful, I can't even describe it. They are my babies," she says.

Along with her dogs, firefighters were able to sift and find the couple's engagement rings.

Investigators say at least six people are getting help from the Red Cross.

Both homes are boarded up and investigators estimate at least half a million dollars in damage. They don't know the cause of the fire, but say it was likely accidental.

A GoFundMe has been set up for the family of six that lives in the first house. Click here if you want to help them.