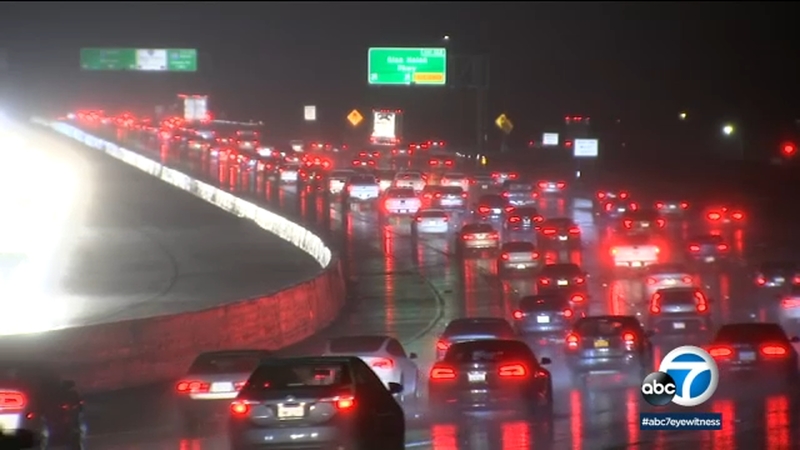 A major snowstorm has moved into Southern California, with the potential to wreak havoc through the Grapevine and Cajon Pass as drivers made the Thanksgiving trek.

The high-impact system is expected to bring periods of significant snowfall to mountain regions through Friday, according to the National Weather Service.

Caltrans said Angeles Crest Highway could shut down as the potential for snow-covered roadways loomed. For the latest on road closures, check out these maps from Caltrans and Los Angeles County Public Works.

The storm will impact the heavily traveled mountain passes, including along the Grapevine, with snow and potentially icy roads creating dangerous driving conditions through Friday. California High Patrol officers escorted drivers through the Grapevine for several hours amid heavy snowfall Wednesday morning.

"We're running paces and we're slowing people down to about 30 miles per hour. That's a safe speed," said Officer Rich Anthes, a CHP spokesman. "When we don't have enough units, people start going 65, 70, and it's just a recipe for disaster."

CHP officials said despite snow falling in the Lebec area, they do not anticipate that the Grapevine will need to be shut down. However, if conditions worsen, closures could go into effect.

For drivers needing to take the Grapevine, the CHP is recommending drivers utilize Highway 14 to the 58 to avoid any mountain passes that may shut down.

Another route to get around any potential Grapevine closures is the scenic route via the 101 Freeway.

Authorities said they expect Wednesday to be the busiest travel day on the Grapevine in a decade.

The CHP posted a Grapevine detour map on their Facebook page.


"We're going to keep the Grapevine open as much as we can, as long as it's safe," said CHP Officer Rich Anthes. "If it becomes unsafe, then we'll hold traffic, let Caltrans do their magic and clean things up, and then we'll open it back up and get the travelers through."

Strong winds could also create hazardous conditions. Anthes advised anyone traveling in a high-profile vehicle to take an alternate route, or possibly postpone their trip.

Rain rolled into the Southland Wednesday morning with 1 to 2 inches expected.

Millions of commuters are expected to drive through the Cajon Pass over the next few days, and they could be at the mercy of the elements.

Traffic slowed to a crawl on the 15 Freeway Wednesday morning as rain, wind, fog and even hail moved into the area.

Traffic slowed to a crawl on the 15 Freeway Wednesday morning as rain, wind, fog and even hail moved into the area.

"This is holiday traffic, it's on southbound 15 and it's coming in, and so is this storm," said Terri Kasinga with Caltrans. "It's starting to hail again up here, the wind conditions are strong. We just want people to know before they go, don't travel during the storm if you don't have to. But be ready if you are gonna come through here."

Caltrans began the process of de-icing the freeway Tuesday, and there was no ice reported on the roadway as of Wednesday morning, but that was expected to change.

"There's a really good chance that we're going to get snow down to even the 2,000-foot level," Kasinga said.

There's no guarantee the 15 Freeway - the so-called Road to Vegas - will be open Thanksgiving Day.

"If we cannot get a handle on snow conditions, and traffic starts slipping and sliding and we see people getting stuck, that's when we start talking with the California Highway Patrol and saying 'Hey, we may have to close the road here,'" said Kasinga.

This would not be the first time the pass has closed. A similar scene played out over a decade ago, when a cold storm rolled in the week before Christmas.

People were slipping and sliding on the road and the snow plows couldn't keep up.

"They better be prepared on the Cajon Pass. If it snows, they're going to be sliding," said one commuter.

One commuter on his way to Las Vegas said the road was already crowded in some places.