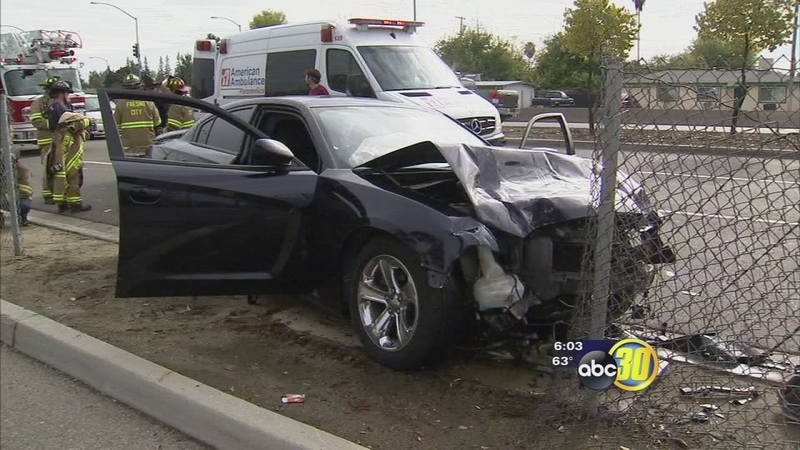 The crash happened around 11 a.m. in the are of Highway 41 and Herndon Avenue. Police said the driver had a medical emergency that caused him to accelerate and lose control of his blue Dodge Charger.

His wife in the passenger seat grabbed the steering wheel to pull over, but not before hitting another car and eventually crashing into street light. Four people in all were treated at the scene and, because the amount of traffic in the area, police say they're fortunate the accident wasn't worse.

"The biggest concern here is not only the vehicle traffic, we have a tendency to get a few homeless around the street, disregarding the traffic flow, but they weren't in the area today," Sgt. Mike Palomino with the Fresno Police Department said.

Drivers were diverted on Herndon for about an hour while police carried out their investigation. The man driving the Charger remains in the hospital, but police say it's due to his medical emergency and not because of injuries sustained in the accident.
Related topics:
trafficfresno northeastfresnotrafficcrash
Copyright © 2021 KFSN-TV. All Rights Reserved.
TRAFFIC
Fresno Chick-fil-A looks to add double drive-thru to ease crowded parking lot
1 killed, 2 injured after driver runs stop sign in Madera County
Fresno Co. Transportation Authority OKs using Measure C funds for Hwy 41
Concrete barrier to be added to dangerous stretch of Hwy 41
TOP STORIES
Merced teacher back home after battle with COVID-19
Looking back at the ups and downs of COVID in Central CA
24-year-old man shot in southwest Fresno, police say
What changes throughout Central California as state reopens
CA has reopened, but not everyone can go maskless
Suspect involved in standoff in Kings County identified
19-year-old arrested on arson charges for NW Fresno fires
Show More
What to expect from CA's reopening today
Newsom picks 10 winners of $15M to celebrate reopening
1 killed in shooting on Hwy 99 near Merced
Valley doctors discuss California's reopening
Valley travel industry shows signs of rebound as CA reopens
More TOP STORIES News