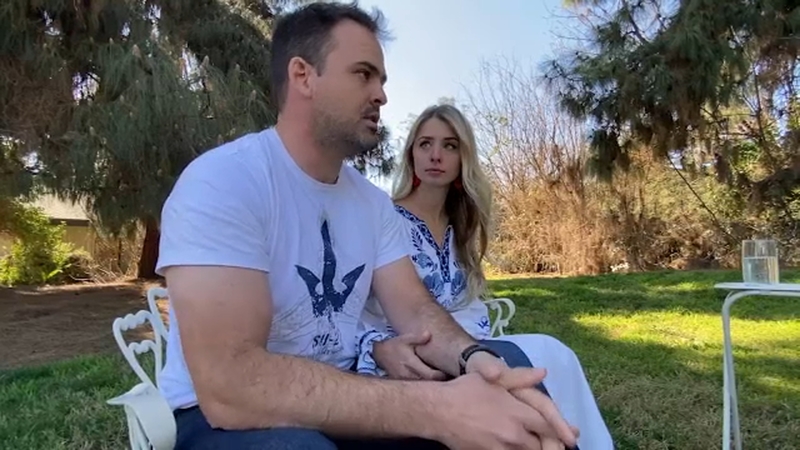 He's a reservist with the Air National Guard's 144th Fighter Wing based in Fresno.

He's trained side-by-side -- on the ground and in the air -- with Ukrainian fighter pilots who are now flying missions to protect their country against the Russian invasion.

"I think they are outgunned but they are tactically doing what they have to to keep in the fight," he said.

Armey is worried about the well-being of those pilots who are now his friends. But he's especially concerned about his wife's family.

Anastasiia is a Ukrainian citizen. The couple met when the 144th trained in her homeland.

But now -- with war raging -- hundreds of thousands of her countrymen and women have become refugees.

"My mom and my sister were actually able to get to Romania," Anastasiia said.

But the rest of Anastasiia's family is still in Ukraine facing the Russian threat.

RELATED: 'They hear missile strikes': Terrified for their loved ones, Ukrainians across Valley pray for peace

The conflict is personal to their family and they want to turn their fear into action.

The couple is starting a fundraising effort, using their contacts in the military, as well as family and friends to get humanitarian aid to Ukraine.

"We have the ability to have contacts in country in Ukraine that can move supplies around," Armey said. "We have a lot of folks in Poland who want to help that we're friends with."

In just a few days of raising money, the Armey's say they've already sent thousands of dollars in aid to Ukraine.

They believe the effort is vital to keep the destruction and bloodshed from escalating beyond the country's borders.

RELATED: Ukraine seeks to join European Union as round of talks with Russia ends

"I'm fearing for my family in Ukraine and here as well," Anastasiia said. "That's why I think it's so important to support, right now, people who fight for Ukraine because at the same time, they fight for peace in the world right now."