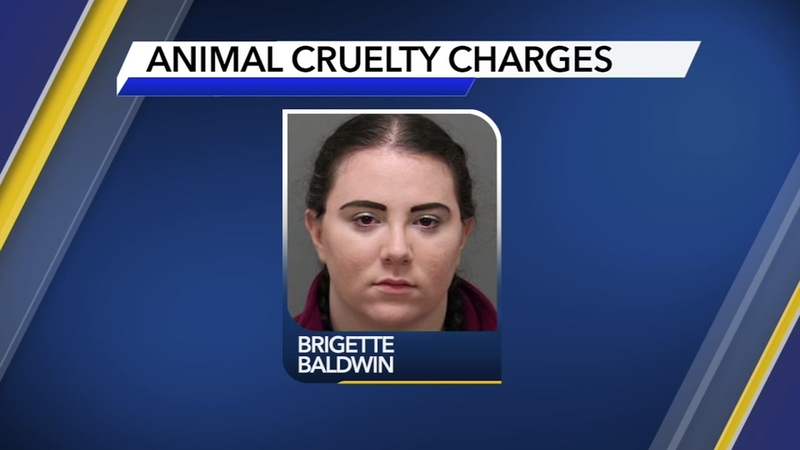 GARNER, N.C. -- A Wake County prosecutor described shocking scenes inside an apartment and a house where a woman charged with killing and starving animals to death once lived.

Brigette Baldwin, 24, faced a judge for the first time on Friday afternoon on eight counts of killing animals by starvation and seven counts of animal cruelty.

She wiped away tears as a prosecutor described the scene found at a Garner apartment from which Baldwin was evicted.

There were ten animals inside with no food or water. There were four cats locked in a separate room. All had died in that apartment.

Peebles added that there was also feces and urine all over the apartment.

Peebles told the judge that investigators went looking for Baldwin at a home on Chelsea Drive in southern Wake County.

Baldwin, according to property records, inherited the house with another family member a couple of years ago.

Richard Smith, who lives across the street and has known Baldwin since she was a child, said he recently saw a Wake County Sheriff's deputy peering through the home's windows. The next thing he knew, the street was full of emergency vehicles.

"The sheriff's department and the fire department were over here, animal control. At least a dozen vehicles. Hazardous response team went in there. They all had all their protective suits on, masks," Smith told ABC11. "I mean it looked like something out of a science fiction movie."

Authorities said they found four dead cats and a starving dog in a crate.

Neighbor Richard Smith was shocked at the total of eight dead cats and seven emaciated dogs.

The judge told Baldwin that if she posted bond and got out of jail, she would have to have a mental evaluation and could not have any animals.
Report a correction or typo
Related topics:
wake countyanimal abusecatsdog
Copyright © 2022 WTVD-TV. All Rights Reserved.
TOP STORIES
Foggy Day School Schedules, Fog Tracker from ABC30
CHP: 1 in critical condition after being hit by car in central Fresno
CA proposal would let older kids get vaccines without parents' consent
Fresno man accused of killing dog pleads not guilty
Kamala Harris to discuss wildfire recovery efforts during SoCal visit
Multiple people displaced after house fire in SE Fresno
Parlier police searching for missing 16-year-old girl
Show More
California water districts will get more supply than planned
Pick your own citrus at this Valley farm
US confirmed 1st COVID case 2 years ago today
Video shows catalytic converter theft in Fresno in less than 2 minutes
Valley hospital beds continue to fill with COVID patients
More TOP STORIES News