Chase customer loses total of $7,000 in Zelle scam: Here's what you need to know

"The caller ID number was identical to the one on the back of my Chase card."
KGO
By Michael Finney and Renee Koury 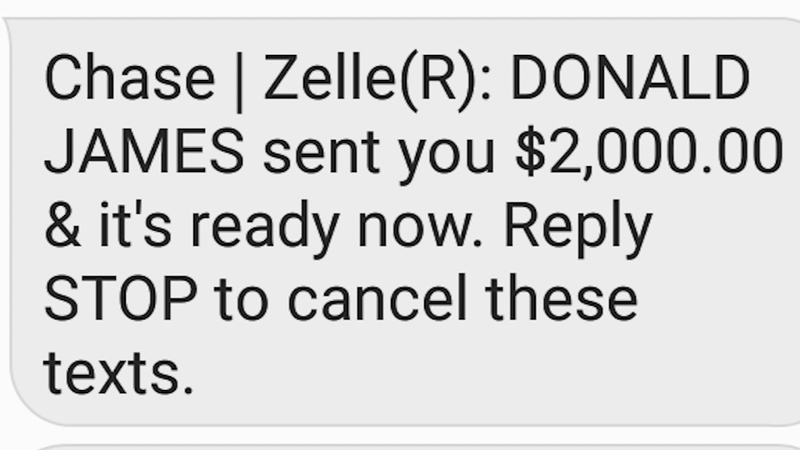 LAFAYETTE, Calif. -- Our sister station KGO-TV has been reporting about a widespread scam using Zelle to steal from Bank of America customers.

Now criminals are widening their net, targeting customers of other banks as well, tricking them into sending them money through Zelle.

And banks mostly say it's the victims' responsibility.

Among the latest - a longtime Chase bank customer, who told his story to KGO-TV.

This viewer wanted to expose what's going on - after he got bilked by imposters claiming to be from Chase bank. Just like they did with Bank of America customers, these crooks say they're helping you stop a fraud when really, they're the ones stealing your money.

"I was like holy smokes! No way! This is happening to so many people!" said Page Pollak of San Francisco when she learned more about the scam.

"This person told me someone was trying to scam me," Claudia Rivera of San Jose.

"It appeared as if it was a text message from Bank of America asking if I was trying to transfer $3,500," said Katie Singer of Oakland.

"I said 'No,' and within 15 seconds my phone rang," said Donna Stoker of Cartersville, Georgia.

"'You're gonna go to Zelle and you're gonna send it to yourself,'" Rivera says she was told.

RELATED: More victims of Bank of America, Zelle scams come forward; here's how to protect yourself

They all were targets of the same scam. All believing they were reversing a fraudulent transaction. All were actually sending money straight to the imposters.

"It was a real eye opener," said Rivera, crying.

RELATED: Scammer used Zelle to steal $7,000 from CA couple's bank account. How to protect yourself

And all were customers of Bank of America. Until now.

It was a Friday night when Donald James of Lafayette got the frightening text: "It says Chase Bank, fraud alert, Zelle payments in the amount of $2,000," James told said. "Chase Bank... if you made this transaction reply yes."

"'If not, reply, no.' I said, 'No.' And my phone rang. And it was Brian from the Chase bank fraud department," he continued.

Or at least he thought it was the Chase Bank fraud department.

"The caller ID number was identical to the one on the back of my Chase card," he said.

But the caller ID was fake.

The imposter told him to transfer the money with Zelle using his own phone number. It seemed like it was going back to James.

"So I was getting notifications on my phone that I had sent myself money," James said.

He typed in the transaction codes... and the imposters snatched the money at the other end.

When one transaction went awry, the scammers got angry.

It was the same con that hit B of A customers across the country... and like B of A's initial response to customers, Chase denied James's fraud claim -

"Their attitude is, if it's on Zelle, shame on you," James said.

Bank of America has offered refunds to only some of the victims of a scam that uses quick-payment app Zelle to transfer funds out of their accounts.

But Chase told James he authorized those payments - even if it was a scam.

And Zelle offers no fraud protections.

What got him most? Chase's denial letter saying: "As we discussed and agreed, no action will be taken. This inquiry is now resolved."

B of A has refunded some victims of the Zelle scam. When we asked Chase about its policy, the bank only offered a warning that bankers will never ask you to send money with Zelle.