The 17-year-old driver remains behind bars, and faces felony charges of DUI and vehicular manslaughter.
KFSN
By Nic Garcia 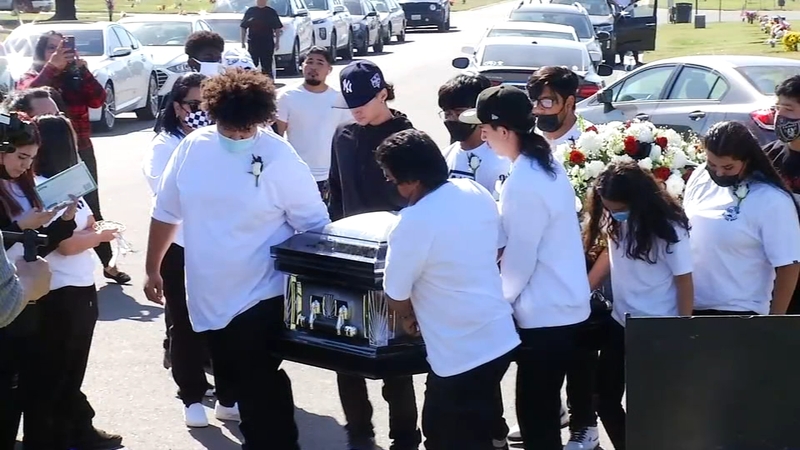 FRESNO, Calif. (KFSN) -- A teenager was laid to rest on Saturday after she was killed in an alleged drunk driving accident just days before her 16th birthday.

Lilyana Romero was one of seven teenagers crammed in a small car last month.

Police said the driver is suspected of driving under the influence of alcohol.

Lilyana died at the scene. Two other passengers were critically injured.

More than 100 people showed up to pay their respects at her funeral on Saturday.

She said it's the most difficult thing a parent has to go through.

"It was overwhelming, she was loved - she was very loved," said Dalia.

Lilyana leaves behind her mom and stepdad, two brothers, a sister, and countless friends.

They're friends who have now become like additional kids for Dalia as they work through their grief together.

He faces felony charges of DUI and vehicular manslaughter.

"I am hoping justice will be served - he will be accountable as he should be for adult actions. Adult actions have adult consequences," Dalia said.

Dalia said she's focusing on getting more parents to talk to their kids about the dangers of drinking and driving to prevent another parent from feeling this pain.

"You've gotta talk to your kids, get that conversation. We can have an uncomfortable ride home and a conversation in the morning but at least you're home safe," she said.

All she's left with are memories of her girl, who loved to skate and loved the Raiders.

Nearly one month after the tragedy, Lily's family said goodbye as they hope for justice.