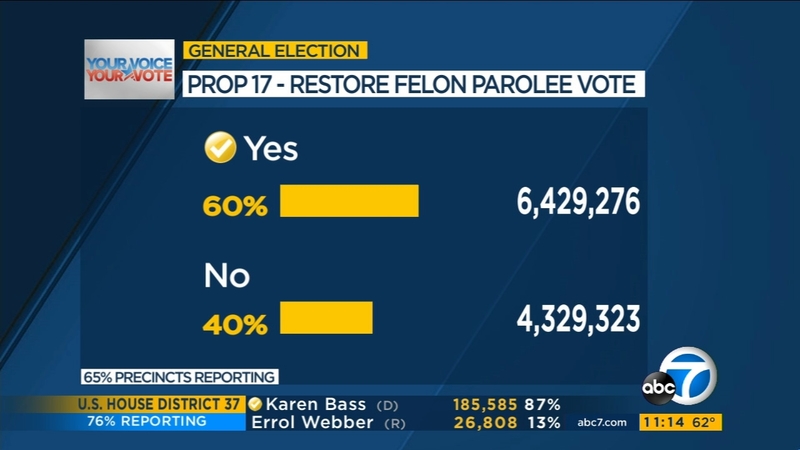 Latest results for California 2020 propositions: What we know so far

Votes are being counted right now, and the reactions from former Vice President Joe Biden and President Donald Trump are very different Wednesday.

Former Vice President Joe Biden, who has won more votes than any presidential candidate in U.S. history, is confident he will be sworn in as the 46th president of the United States, while Trump's campaign is now filing lawsuits to stop counting.

Meantime, some crucial congressional races are too close to call in Orange County.

The historic election saw nearly 12.8 million Californians vote before Election Day, according to the secretary of state. There was little drama at the top of the ticket, where Biden easily won the state's 55 electoral votes.

California is one of the nation's most Democratic states - the party holds every statewide office, dominates the Legislature and congressional delegation, and outnumbers registered Republicans by nearly 2-to-1. It's also the home of Biden's running mate, Sen. Kamala Harris. She served as the San Francisco district attorney and the state's attorney general before winning election to the Senate in 2016.

California's nearly 40 million voters have awarded their electoral votes to the Democratic candidate in every presidential election since 1992.

*Counties are colored red or blue when the % expected vote reporting reaches a set threshold. This threshold varies by state and is based on patterns of past vote reporting and expectations about how the vote will report this year.

Prop 14: TOO CLOSE TO CALL - Would authorize $5.5 billion in general bonds to go to stem cell research, including research on treating Alzheimer's and dementia.

Prop 16: FAIL - Would have repealed 1996's Proposition 209, which banned the government and public institutions (like schools) from discriminating or giving preferential treatment based on sex, race, ethnicity or nationality. Prop 209 effectively banned public employers, universities and the like from using affirmative action, as it was seen as discriminatory.

Prop 18: FAIL - Would have amended the state constitution to allow 17-year-olds who will be 18 by the time of the general election to vote in primary or special elections that precede them.

Prop 19: TOO CLOSE TO CALL - Would change tax assessment rules for some property transfers in California.

Prop 20: FAIL - Would have reclassified certain crimes and expand mandatory DNA collection. Prop 20 would have made it so firearm theft, vehicle theft and unlawful use of a credit card are classified as "wobblers," meaning they can be charged as misdemeanors or felonies. Prop 20 also would have established two new crimes in the code, serial crime and retail organized crime, also both wobblers. The proposition also expanded mandatory DNA collection to those convicted of certain misdemeanors.

Prop 21: FAIL - Would have overhauled rent control in California allowing local governments to put rent control in place for all kinds of housing, including single-family homes, condos and townhomes.

Prop 22: PASS - Classifies app-based drivers for companies such as Uber and Lyft as independent contractors instead of employees. The campaign was the most expensive ballot measure in California history, with more than $204 million contributed for lobbying and advertising efforts - most of it by the rideshare companies who had threatened to leave the state if the law wasn't changed.

Prop 23: FAIL - Would have required dialysis clinics to have at least one physician or nurse-practitioner present while patients are being treated and against clinics to report patient infection data to the state.

Prop 24: PASS - Modifies the California Consumer Privacy Act to force companies to honor consumers' requests that their data not be shared and to get permission before collecting data on teens and children. It would also let consumers opt-out of personal information being used for marketing and request incorrect information about them be corrected. The state must establish a new agency to oversee consumers' data privacy.

Prop 25: FAIL - Repeals Senate Bill 10, which eliminated the cash bail system in California and replaced it with an algorithmic risk assessment method that determines who gets released from jail while awaiting trial based on risk to society instead of the ability to post bond.

One of the most hotly-contested congressional races in the U.S. might be the battle in central California's 21st District, which includes all of Kings County as well as portions of Fresno, Kern, and Tulare Counties.

As of Tuesday night, the race was separated by a few hundred votes. Valadao holds a slim lead over Cox, with 65% of expected votes counted, but the race is too close to call.

California's 25th congressional district, which encompasses northern Los Angeles County and the eastern part of Ventura County, could potentially have its fourth representative in two years after this election.

The seat is once again one of the most competitive races in the country, a spot that first opened up after Rep. Katie Hill resigned.

Hill had unseated incumbent Rep. Steve Knight in 2018, then resigned in 2019 amid allegations of an inappropriate relationship with a staff member, and the leak of intimate photos.

Then Republican Mike Garcia, a businessman, and former Navy pilot, won the special election in May 2020 against state Assemblywoman Christy Smith. That special election filled the seat until the November election.

Republican Young Kim has defeated Democratic U.S. Rep. Gil Cisneros in Southern California. The contest was a rematch from 2018, when Cisneros delivered an upset in what had been a longstanding GOP district anchored in Orange County.

Kim's victory Wednesday in the 39th Congressional District overcame President Donald Trump's poor performance in heavily Democratic California, where he got only one-third of the votes. The former state lawmaker was born in South Korea and grew up in Guam.

Democratic Rep. Katie Porter has won reelection to the U.S. House in California's 45th Congressional District, according to the Associated Press. The contest between Porter and Republican Greg Raths was another closely watched race in Orange County. Porter, an attorney, and UC Irvine law professor was challenged in the March primary by Raths and five other Republicans in a district that was long considered a safe, conservative area but has seen a growing influx of Democrat voters. The district covers an inland area between roughly Mission Viejo and Yorba Linda.

It's a big victory Tuesday for the beleaguered California GOP after losing the seat in coastal Orange County's 48th Congressional District in 2018.