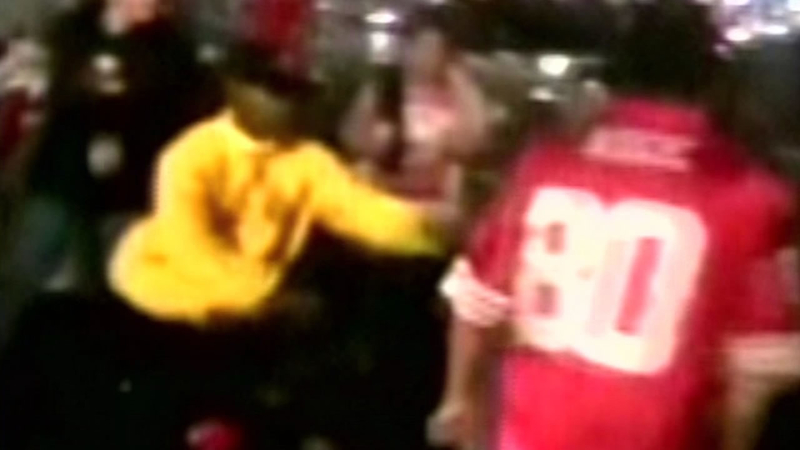 SANTA CLARA, Calif. -- While the 49ers celebrated last night's win against the Minnesota Vikings, a video posted to social media showed a Vikings' fan being assaulted outside Levi's Stadium.

The assault happened Monday night in a parking lot at as fans were heading back to their cars following the game. Police have spoken to the victim in the attack and they now want to speak to the other people who were involved to get their side of the story.

Santa Clara police are asking for people's help in identifying the people involved in a post-game fight that was captured on video.

"It's disturbing, it's shocking and we've put investigators on it to fast track this case and identify these folks, and bring them to justice," said Santa Clara police Lt. Kurt Clarke.

Still images of the video show a Minnesota Vikings fan being assaulted at Levi's Stadium by a group of 49ers fans following Monday's win.

Many 49ers fans were disappointed to see this group get violent.

"It's brutal to see somebody getting hit so violently by somebody else, right? For me personally, it's a hard thing to watch," said San Jose resident Walter Sullivan.

"Visiting fans need to feel comfortable going into an opposing stadium, because at the end of the day, it's just a game," said San Jose resident Jacob McCluskey.

Investigators are looking into last night's incident and have already interviewed the victim. Fans say regardless of who was originally at fault, this type of violence needs to stop.

"It's so pointless to end a night where the 49ers won, that's crazy, and then they would get into a huge fight like that. It's a shame," said Clayton resident and 49ers fan Cindy Dabbous.

Fans of the 49ers are adamant that this shouldn't be a reflection of who they are as a whole.

"I know it does not represent the spirit of the 49ers, or football at all for that matter," Dabbous added.