Man vows to pick up trash from Coarsegold to Fresno 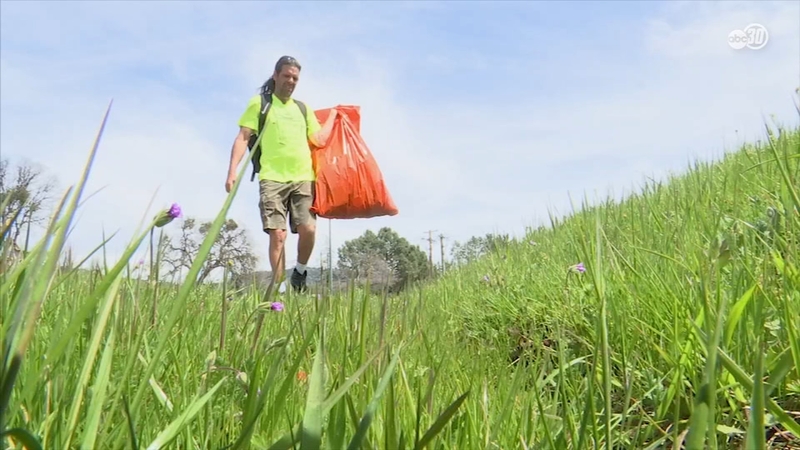 COARSEGOLD, Calif. (KFSN) -- Lenny McConnell loves his hikes near Coarsegold, but something was bothering him.

"Hiking, looking at all the trash, in my mind I said 'next time you go, take some bags with you'," McConnell said. That hike happened about five years ago, and he's been cleaning as he goes ever since.

"I think it's just being a human being. It's not good to throw trash on the side of the road, a child could tell you that."

McConnell's eye-opening moment came recently. He had been in the habit of cleaning the stretch of road between his home and Coarsegold, but he decided to clean the stretch of Highway 41 between Coarsegold and Oakhurst.

"Seven miles, 73 bags of trash," he said. "All of us should have respect for where we live and the earth that gives us so much. Let's give back and not take. Too much taking going on and not enough giving."

Those 73 bags were collected by McConnell in about eight days. He bags them up and leaves them just off the road, where they're picked up by roadside services or community members who want to help.

McConnell says people stop to talk to him about his work all the time.

"And that's what keeps me going, the honks and waves and people stopping to say 'thank you, we appreciate you'," he said. He believes that if everyone pitched in, the problem wouldn't be nearly as bad.

"Grab a bag, walk like a mile from your house and back picking up trash... wouldn't that be awesome bro? Everyone pitching in?"

McConnell does the cleanup work when he's not busy working jobs as a home improvement specialist. His next goal is even more ambitious.

"I'm going to pick up all the trash from Coarsegold to Fresno," he said. McConnell plans to hike southbound along Highway 41 during the trip, picking up trash the entire way. He's hoping to attempt the feat later this year.
Report a correction or typo
Related topics:
societycoarsegoldtrashcoarsegoldlitteringmountainsvolunteerismabc30.com original
Copyright © 2021 KFSN-TV. All Rights Reserved.
ABC30.COM ORIGINAL