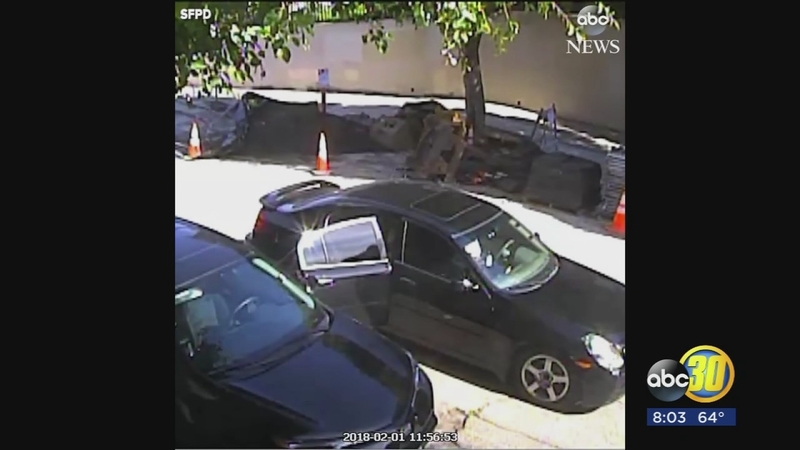 SAN FRANCISCO, Calif. (KFSN) -- What started as a car break-in quickly spiraled into a violent confrontation between police and the suspects near San Francisco's Alamo Square Park.

Warning: Video shows graphic content and may be disturbing to some.

Surveillance video shows officers draw their weapons as the driver runs over his accomplice and a cop.

They peer inside a parked SUV, then smash a window and grab a bag. What they didn't know is three undercover police officers were watching them. The officers, in plain clothes, move in to make arrests and tackle one of the suspects to the ground.

WATCH: Surveillance video shows moment a car break-in spirals into dramatic confrontation between police and suspects. Driver of suspect car ends up running over his accomplice and an undercover officer. Police say they could have been killed. More at 11 on @abc7newsbayarea pic.twitter.com/Giuz2jpW3I

"While the officer was taking the remaining suspect into custody, the driver suspect put his vehicle into reverse, subsequently striking the officer and his accomplice that were down on the ground," said Officer Grace Gatpandan.

The driver pulls forward and hits them again.

"This incident is a stark reminder of the dangers SFPD officers face on a daily basis," said Gatpandan. "What began as a property crime quickly turned into a violent assault which could have had deadly consequences."

All three suspects were arrested and face felony charges for attempted homicide.

They have been identified as 25-year-old Devonta Lofton, 23-year-old Adrian Landers, and 19-year-old Jamon Butler. All three suspects are from San Francisco.

Meanwhile, the San Francisco Police Officers Association is criticizing SFPD's Use of Force policy which prohibits officers from firing at a suspect in a moving vehicle.