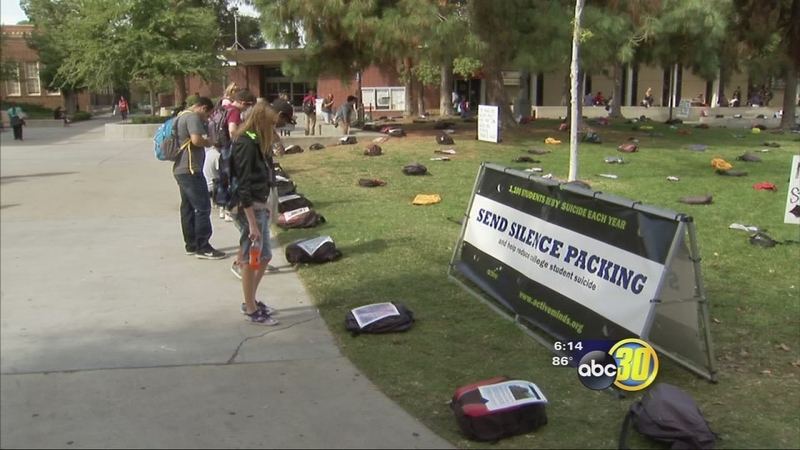 FRESNO, Calif. (KFSN) -- A powerful exhibit at Fresno City College was designed to draw attention to a sad statistic.

FCC sophomore Summer Thepmany said, "it's a serious matter and people need to realize that."

1,100 backpacks represented an added burden far too many college kids have been carrying. The backpacks were laid out on the grass on campus.

The faces, names and stories of young lives cut short personalized a growing problem. It's one many young people in the valley have dealt with.

FCC freshman Alyjha Tauscher said, "I guess it just really hits home. Being there personally at one point in my life and then having people that I've lost to suicide so recently." She lost two friends at Kingsburg High who committed suicide last year. A tattoo reminded her of the day she tried to do the same.

Thepmany said, "if you've been in that dark hole and you've had suicide thoughts, you've attempted suicide and when you see it up front and see these people actually gone through it, it hits home as Aly said. It hurts. I survived. We survived it." But both realized they had much to live for. They wanted others to understand help is available.

Tauscher said, "it's just amazing there is so people out here, so many backpacks." The "Send Silence Packing" display was sponsored by Active Minds.

Arnold heads the FCC chapter. He has counseled many students. "We see a lot of depression, a lot of anxiety, feelings of isolation, feelings of loneliness." He added it was important to erase the stigma of mental illness.

Summer was a victim of cyber bullying. She shared a powerful message. "Always spread positive vibes out there. Be nice to people because you don't know what struggles they're going through."