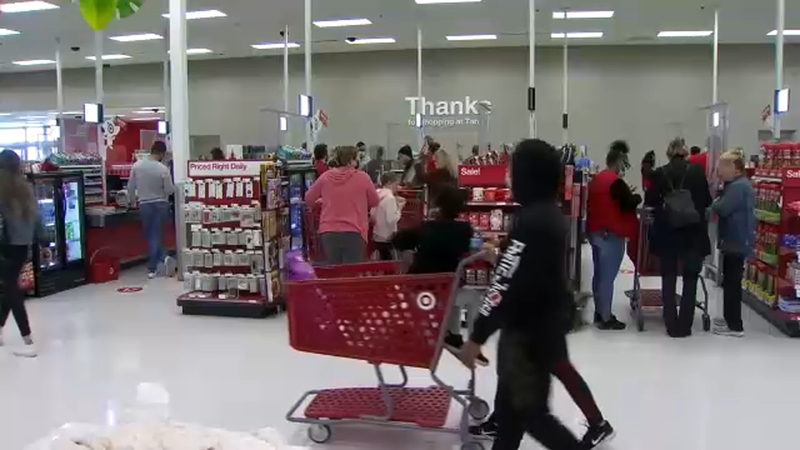 FRESNO, Calif. (KFSN) -- Baskets were filled to the brim for Black Friday.

Shoppers, keeping the tradition alive, lined up to get into stores like Target and Best Buy early Friday morning.

"If we were to split up - I would go this direction, he'll go the other direction so we can cover more ground," shopper Hue Vang said.

Black Friday shoppers were strategizing before the doors opened.

Lines of people poured in before the sunrise and a steady stream of customers continued throughout the day.

"We were getting some Christmas shopping done, trying to get the little things for the kids that they need," said Maria Gruszczynski.

Parents Maria and Adam Gruszczynksi typically shop on Black Friday and said this year was different compared to years past.

"Didn't have trouble finding parking, just were able to walk right in without waiting in lines and we were able to just walk right up to a register when we were done," said Adam Gruszczynski.

While some of the aisles were filled, check stands and parking spaces were open.

That could be because people are online shopping instead.

There were $5.1 billion in online sales Thanksgiving Day, according to Adobe Analytics.

Bonnie Sandoval did her shopping online this year.

She just stopped by the store for groceries Friday.

"I have two kids so I was like - if I'm going to get my toys, I'm going to do it way beforehand," said Sandoval.

Justin Sims did the same. He preordered the just-released "The Simpsons Arcade Game".

"I picked it up online so I didn't have to wait in line and I just wanted to be in and out," Sims said.

Andrea Smith kept her family tradition alive, filling a shopping cart with toys that will be donated to Toys for Tots.

"We just hoped that the prices might be cheaper today," Smith said.

As shoppers made their way around River Park, security was on the ground and up above.

Fresno Police Department also looking to prevent crime with their annual Operation 'Christmas Presence' sending out extra officers to patrol at every mall and shopping corridor.