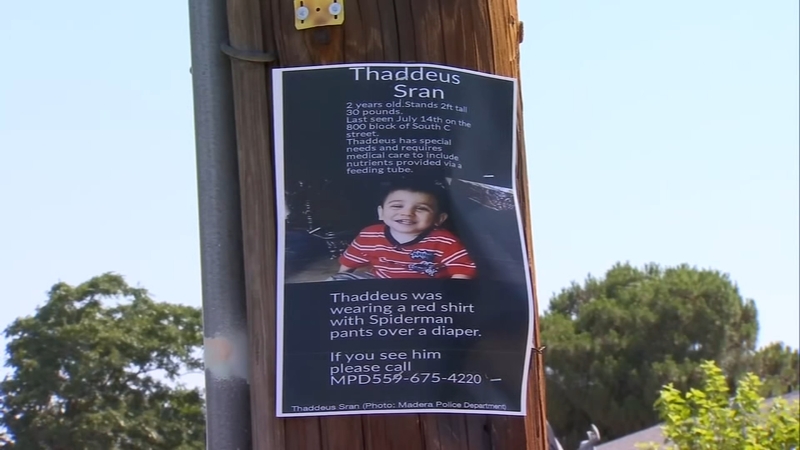 FRESNO, Calif. (KFSN) -- The body of a toddler was discovered on Thursday morning in Madera County which is believed to be missing 2-year-old boy Thaddeus Sran, police said in a news conference on Thursday afternoon.

Investigators say the remains of a child between the ages of two and three years old were found by cadaver dogs in a rural area but did not provide further information.

Police say that while an official identification has not been made, investigators believe the child is Thaddeus Sran.

Thaddeus was reported missing by his parents on July 16. His parents told police the toddler disappeared between the hours of 10 p.m. and 8 a.m.

On Tuesday, investigators announced in a press release that Thaddeus's parents had "stopped cooperating" with the investigation."

Roger Nuttal, an attorney for the family, says that's not the case.

Police say the couple had a baby girl that died in 2015.

Nuttal says the baby was born prematurely and was in the hospital for several months until the parents were able to bring her home, but ultimately died from SIDS.

"There was an investigation done and we have the medical records attesting the fragile condition of the baby, and that case was closed. There were no charges," he says.

He says despite speculation, this is, no doubt, another tragedy the family is facing.

"These are good people. I venture to say they weren't involved in illegal behavior in regards to their baby," he says.

Action News asked police if the parents are considered suspects, and at this point, they say nothing is off the table.