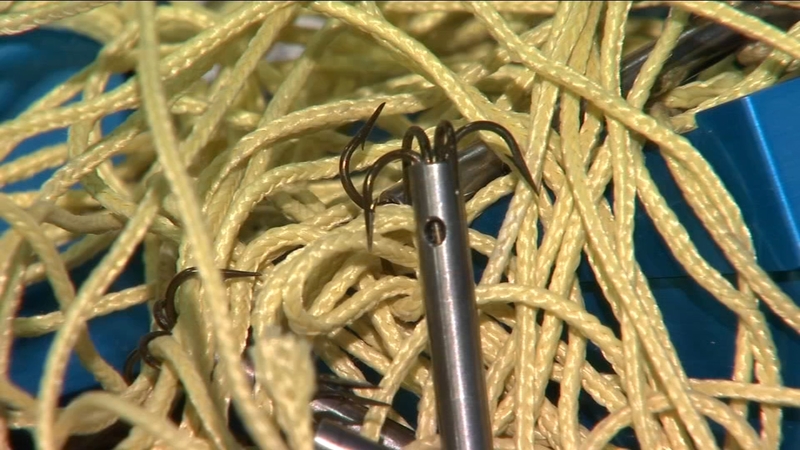 It is a tool -- about the size of a cellphone -- designed to deal with someone experiencing a mental health crisis and restraining them before the situation escalates.

"The number of mental health calls we face on a daily basis where the person is aggressive toward officers is on the rise and this type of tool would be effective in those situations," said Fresno Police Department Chief Jerry Dyer.

It's called the Bola Wrap 100 -- a device powerful enough to shoot out an 8-foot Kevlar cable with hooks on the end at about 640 feet per second.

Law enforcement agencies across the country are exploring this new technology.

Fresno Police Chief Jerry Dyer allowed demonstrators to test the wrap on him from about 20 feet.

"What you feel is a little bit of a sting. Not like when you get hit with a taser sting, which is far greater," he said.

The intent for officers using the non-lethal device is it gives them the opportunity to de-escalate a situation while using minimal force.

"A temporary mobilization of the individual where they can't move their arms or legs and secondarily so that officers can place their handcuffs on them and restrain the individual," said Dyer, describing the device.

"We have about 50 agencies that have the device and about half of those are testing it and the other half have it in the field or preparing to put in the field and are in the policy writing phase," said Mike Rothans of Wrap Technologies.
Report a correction or typo
Related topics:
fresnocrimetechnologyfresno police departmentbatman
Copyright © 2022 KFSN-TV. All Rights Reserved.
TECHNOLOGY
Warning about purchasing fake negative COVID-19 PCR test results
Microsoft buying Activision Blizzard in $68.7 billion deal
SoCal women believe they were tracked by an Apple AirTag
Interact with a real life WALL-E at this Bay Area hotel
TOP STORIES
Man pleads not guilty to murdering brother-in-law on Christmas Eve
Some Valley hospitals postpone 'elective' surgeries due to COVID surge
Man who admitted killing dog to Fresno police facing more accusations
Man charged with murder of 2-year-old whose father died a year earlier
24-year-old man shot in central Fresno, police say
43-year-old man stabbed in northwest Fresno, police say
How reliable are rapid tests? Dr. explains when to depend on results
Show More
Is there home appraisal bias in Fresno? Professionals weigh in
Housing Watch: Million-dollar homes at Ventana Hills in Fresno County
Good Sports: Fresno woman gains recognition with indoor rowing
Valley ag business continues to feel impact of supply chain issues
Family of 5 displaced after house fire in southwest Fresno
More TOP STORIES News