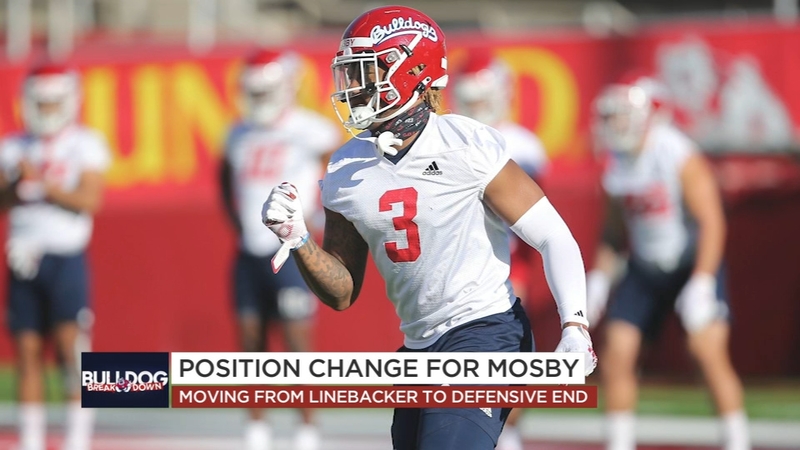 FRESNO, Calif. (KFSN) -- "I think of when Arron came in four or five years ago, it seems like times flown by but I feel like we always thought he would become that," says Fresno State football coach Kalen DeBoer. "I remember being on the offensive side thinking man, he's got a big body to grow into."

Standing at 6'4 and 247 pounds, Arron Mosby will return this fall as a 5th-year senior. Deboer sees Mosby as a hybrid player, referring to his new position change similar to now NFL Falcon Mykal Walker. The former Bulldog was also moved from linebacker to defensive end.

"When I came in a year ago, I felt like sooner or later, he would become a defensive end play closer to the ball," DeBoer said. "He's learning the techniques, he's playing with more confidence each and every day in practice and just adds to a group that already puts a ton of pressure on the quarterback."

Like Mykal Walker, Mosby will also be changing from number 15 to number 3. His new identity this Spring is in the trenches, learning from Kwami Jones, David Perales and Kevin Atkins.

"They're there to make me better, to help that d-line core get stronger and better," Mosby said. "I would say the linebacker corps is the strength of our defense but the d-line makes it happen for everybody else."

The defensive unit recorded 25 sacks in 6 games last season, ranking third in the nation in sacks per game. With all 11 starters, returning the pass rush is expected to see that same success.

"I think we got some guys that work individually really well, but then also together when you got your games that you're running, they do a nice job of understanding what we're trying to accomplish," DeBoer said. "It doesn't matter who gets the credit; someone's going to get home and get to the quarterback."

The former Apache played limited snaps in 2020 as he was working through injuries. Now embracing his new role on the defensive line, he's excited to have the Red Wave back in the stands this fall.