All of Central California in 'exceptional drought' as dry conditions worsen

Roughly 47% of the entire state is in an exceptional drought.
KFSN 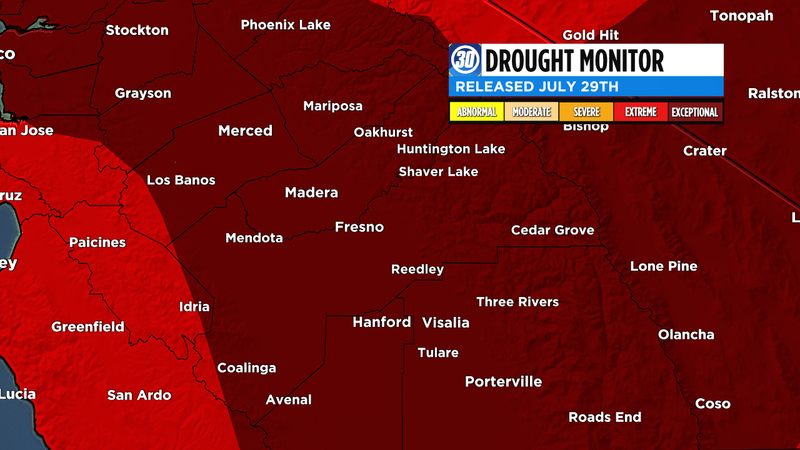 All of Central California in 'exceptional drought' as dry conditions worsen

FRESNO, Calif. (KFSN) -- California's drought keeps getting worse, including in the Central Valley, where the entire area is now facing exceptional drought conditions.

An updated map from the U.S. Drought Monitor shows Central California, including all of Fresno, Madera, Kings, Merced, Tulare and Mariposa counties, in the "exceptional drought" range, where the most severe level of dry conditions is occurring.

Roughly 47% of the entire state is in an exceptional drought.

ABC30 Meteorologist Madeline Evans said it has been 93 days since there was measurable rainfall in Fresno, and it doesn't look like there are showers in the forecast for a while.

All of the Valley is now under an exceptional drought. It has been 93 days since we have seen measurable rainfall in Fresno. @ABC30 #Drought #AMLive #ABC30Accuweather pic.twitter.com/KHDeviph97

Regardless of where Californians are in the state, all are dealing with some form of drought conditions, the map shows. More than 37 million Californians are living in a drought-affected area.

At this time last year, only 3.04% of the state was in an "extreme drought," but conditions were still dry.

Now, a majority of the state is under a drought emergency.

The dry conditions cause concern for fire danger. Meanwhile, Central Valley farmers, who are have already had their water resources reduced, could soon face some of the harshest water restrictions.

California state water regulators are considering an emergency order that would cut a major source of water.

The order would cut thousands of Central Valley farmers from using river and stream water to irrigate their crops.

Water regulators are slated to vote on it on August 3.