Valley farmers might face harshest ever water restrictions due to drought

Garlic and tomatoes, mostly grown in the Central Valley, could see a price hike at the grocery stores.
KFSN
By Linda Ha 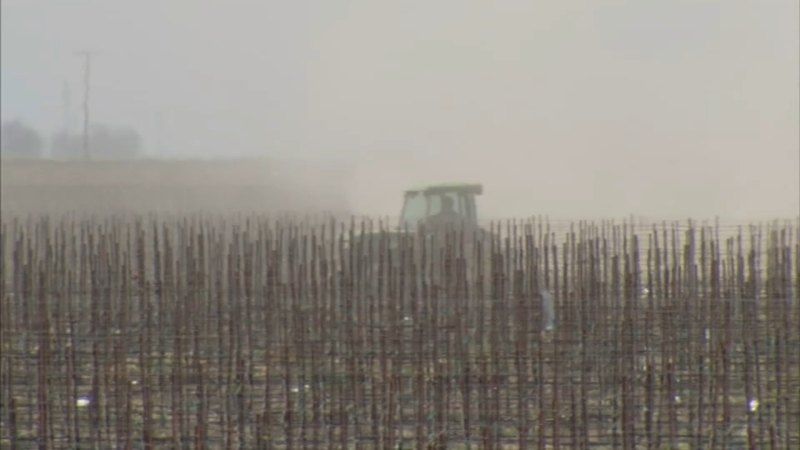 Valley farmers might face harshest ever water restrictions due to drought

"Not only is this year already bad, it's about to get worse," said Fresno County Farm Bureau CEO Ryan Jacobsen.

Most of California is under a drought state of emergency.

On Friday, the State Water Board released a draft 'emergency curtailment' order for the Sacramento-San Joaquin Delta watershed where there's an extreme water shortage.

"We're looking at one of the tightest years on record," said Jacobsen.

The order would cut thousands of Central Valley farmers from using river and stream water to irrigate their crops.

Water regulators are slated to vote on it August 3rd.

If approved, the order will go into effect in the next several weeks.

"For some, ultimately, they're going to have to make extraordinarily harsh decisions, of pulling permanent crops, or not planting at least for another year," said Jacobsen.
"We don't come out of this in six months. This is a multi-year process to come out of."

Jacobsen said local farmers have never experienced water usage cutbacks of this magnitude.
And many who rely on the State Water Project or the federal Central Valley project are already dealing with significantly reduced allocations.

"We've had drought before but it's reduced water, not cut off the water completely, so they're going to scrambling to figure out how do they just get through the year."

The State Water Board has characterized the dry conditions as unprecedented.

And while farmers may feel the brunt of this first, it impacts everyone.

Garlic and tomatoes, mostly grown in the Central Valley, could see a price hike at the grocery stores.

"For Valley farmers right now, it's emergency mode, trying to do anything and everything for those farmers who don't have any water supply to make it to the end of the year," Jacobsen said.