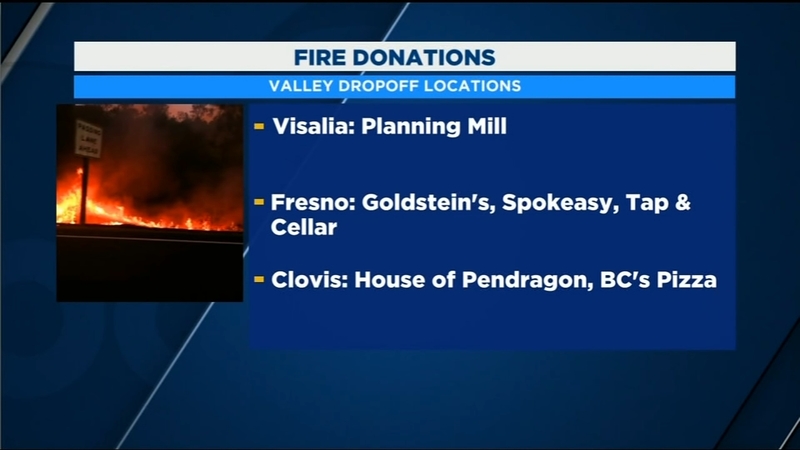 FRESNO, Calif. (KFSN) -- Donations for those affected by the Camp Fire have been pouring in.

Now, some Valley restaurants and bars are banding together to do their part.

It started when a Sierra Nevada employee based in the Central Valley called on the local craft beer community to help those displaced by the fire.

Sierra Nevada's brewery is located in nearby Chico.

"It's a tight-knit community," said House of Pendragon Brewing Co.'s Vanessa Castro. "We all share the same patrons. So I think he (knew) that everyone would rally behind him and it worked. A lot of people are re-posting."

House of Pendragon's owner and brewmaster is close friends with the Sierra Nevada employee.

Castro expects their customers-many of them more like family members will want to contribute to the cause.

"Gift cards for places like Target, Walmart, gas stations...I think toiletries, things like that," she said. "We will be accepting anything that people have."

The Planing Mill in Visalia will also take donations, along with several other craft beer spots and restaurants in Fresno and Clovis.

The donation drive will go through Thursday and the items will be delivered to Butte County on Friday.

"(The) community is being affected and if we can help any way we can, we really just want to help," Castro said.

Other drop-off locations include B-C's Pizza in Clovis, and Goldstein's, Spokeasy, and Tap & Cellar in Fresno.

Through Friday, you can also round up your purchase to the nearest dollar at Macy's.