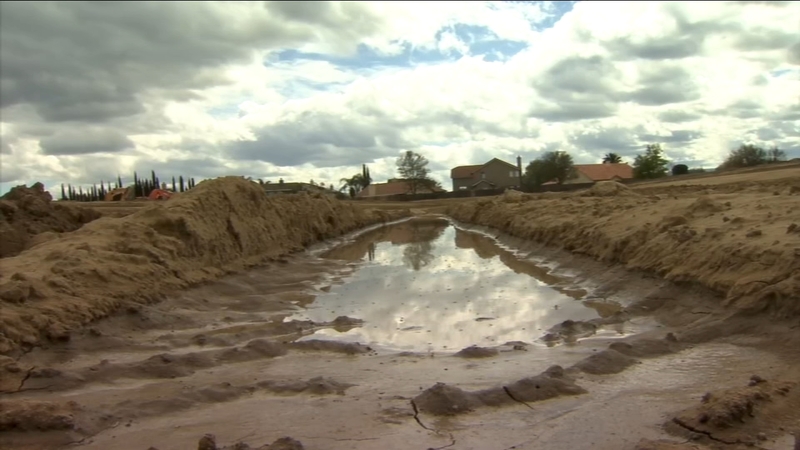 "I get more anxious the later it gets in the year," he said.

Pedretti and his family are cotton farmers, and they're usually planting by now.

However, they haven't planted any cotton yet because of all the recent storms.

"We also have a dairy where we grow our own forages for, and usually we're cutting alfalfa which we haven't yet because of the rain," Pedretti said.

Pedretti is also the president of the Merced County farm bureau and says farmers with vegetable crops are also delayed.

"They're already a month behind. You'll see some of those California grown vegetables get to the markets later," he said.

Farming isn't the only thing impacted.

Weeks of rain have also delayed some construction on new homes and parks in Merced County.

Greg Hostetler of Stonefield Home says he's working to clear some of the wet mud.
His company is working on building more than 150 houses on an area of land in Los Banos, but are behind because of the recent storms.

"We've been held up here for two or 3 months because of the weather, and so we had to doze the mud out of the way so we can get ready for this home community right here," Hostetler said. "Our guys haven't been putting as many hours in as they normally would. So everybody's been challenged by this."

In Merced, a space in Applegate park is expected to become a new playground with ADA compliant equipment soon.

City officials were hoping to start construction sooner, but will now have to wait until the end of April to start the project.

"We're waiting for it to be drier, so the turf doesn't get ruined with the construction equipment, with the workers its a safer environment when it's warm. Not something they can do in the rain," said Carl Brown with Merced City Public Works.

There'll also be a series of activities at the park to keep parents and their kids busy while they wait.

Hostetler says he's hoping the new homes will be built in the next year. For now, he's just hoping for drier days.