Decoding the extremist symbols, groups at the Capitol Hill insurrection

CNNWire
By Mallory Simon and Sara Sidner, CNN Photo Illustrations by Priya Krishnakumar, CNN
Flags, signs and symbols of racist, white supremacist and extremist groups were displayed along with Trump 2020 banners and American flags at Wednesday's riot at the U.S. Capitol.

The pictures tell part of the story of the beliefs of some of those who chose to show up on that day -- from passionate and peaceful Trump supporters to extremists who showed their hate with their symbols as well as their actions.

RELATED: US Capitol arrests: List of charges for those arrested in DC chaos

The mixing of the groups is one issue that experts who track extremism and hate have long been concerned about.

The certification of the election results proved to be exactly the type of event that brought together various groups and could have led to radical ideas being shared, they say. The initial event, which was heavily promoted and encouraged by President Trump, gave all of these groups something to rally around.

"This was an event designed to oppose the results of a free and fair democratic election and the transition of power that would naturally follow," Mark Pitcavage, a historian and expert in extremism with the Anti-Defamation League said.

CNN spoke with him to identify the symbols and understand the chilling messages of tyranny, white supremacy, anarchy, racism, anti-Semitism and hatred they portray. 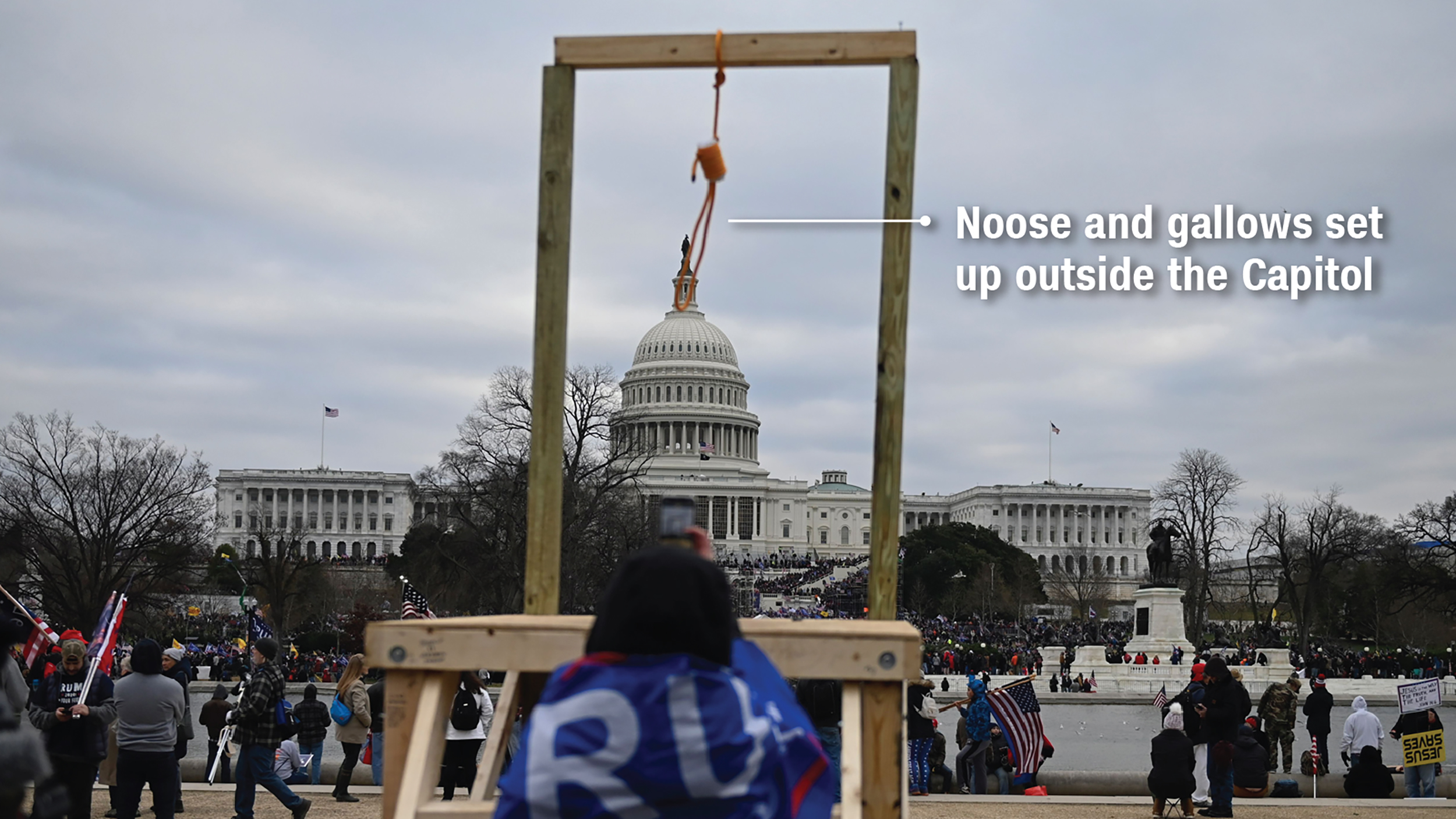 While a noose on its own is often used as a form of racial intimidation, Pitcavage says he believes in this context the gallows were to suggest punishment for committing treason. "It is suggesting that representatives and senators who vote to certify the election results, and possibly Vice President Pence, are committing treason and should be tried and hanged," he explains.

That treason rhetoric was seen on right-wing message boards in days leading up to the event. 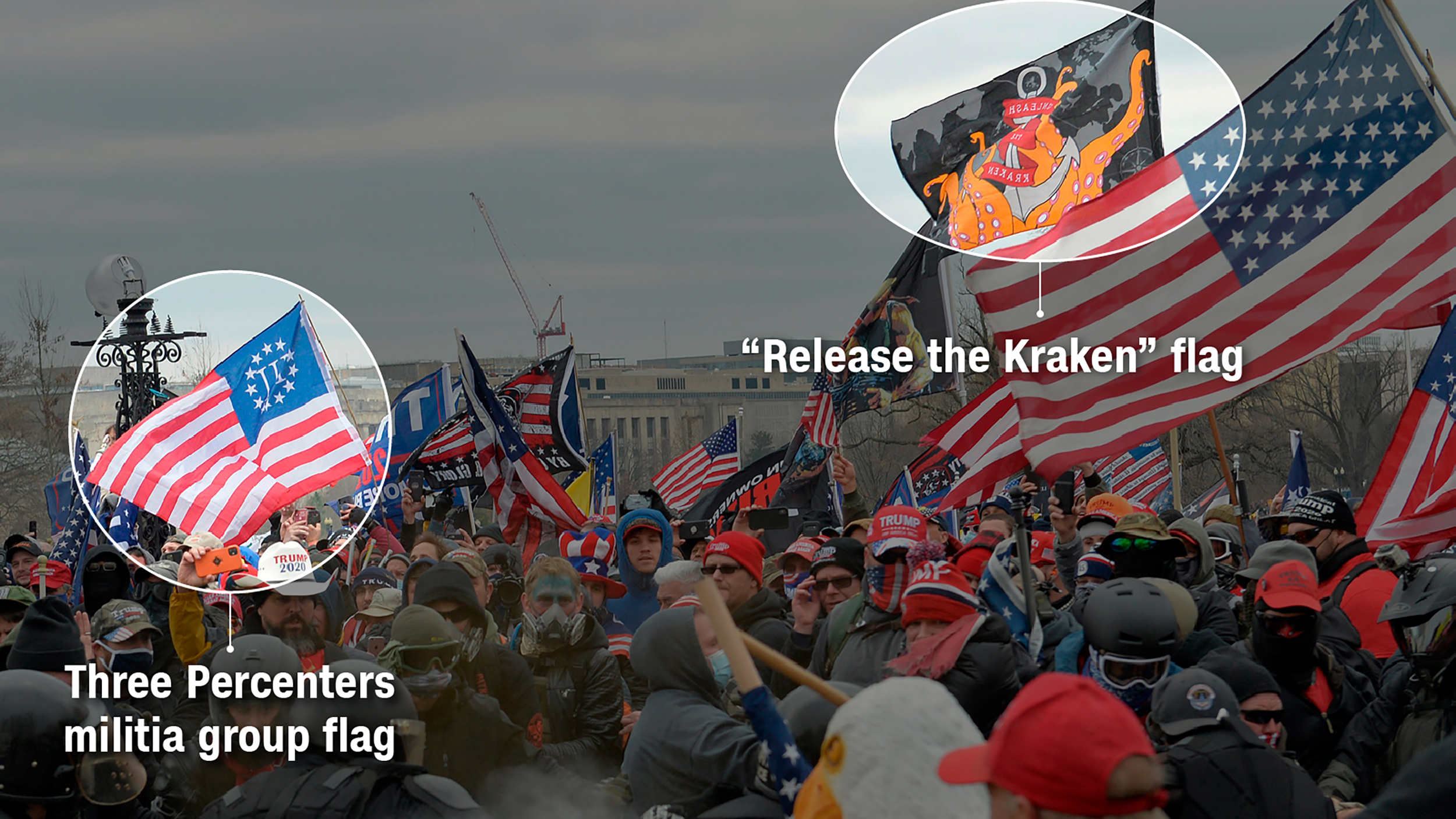 The Three Percenters (also known as III%ers, 3%ers or Threepers) are part of the militia movement in the United States and are anti-government extremists, according to the ADL.

Like others in the militia movement, Three Percenters view themselves as defending the American people against government tyranny.

"Because many adherents to the militia movement strongly support President Trump, in recent years, Three Percenters have not been as active in opposing the federal government, directing their ire at other perceived foes, including leftists/antifa, Muslims and immigrants," according to the ADL.

The group's name comes from an inaccurate claim that only three percent of the people in the colonies armed themselves and fought against the British during the Revolutionary War.

The flag seen above is their logo on the traditional Betsy Ross flag. Pitcavage says right-wing groups (mainstream or extreme), which think of themselves as patriotic, sometimes co-opt America's first flag.

The flag references former Trump lawyer Sidney Powell's comments that she was going to "release the Kraken." Powell falsely said she had evidence that would destroy the idea that Joe Biden won the presidency.

The "Kraken," a mammoth sea creature from Scandinavian folklore, has turned into a meme in circles that believe the election was stolen. The Kraken, they say, is a cache of evidence that there was widespread fraud. On social media, QAnon conspiracy and fringe sites #ReleaseTheKraken has been widely shared along with false theories of fraud. 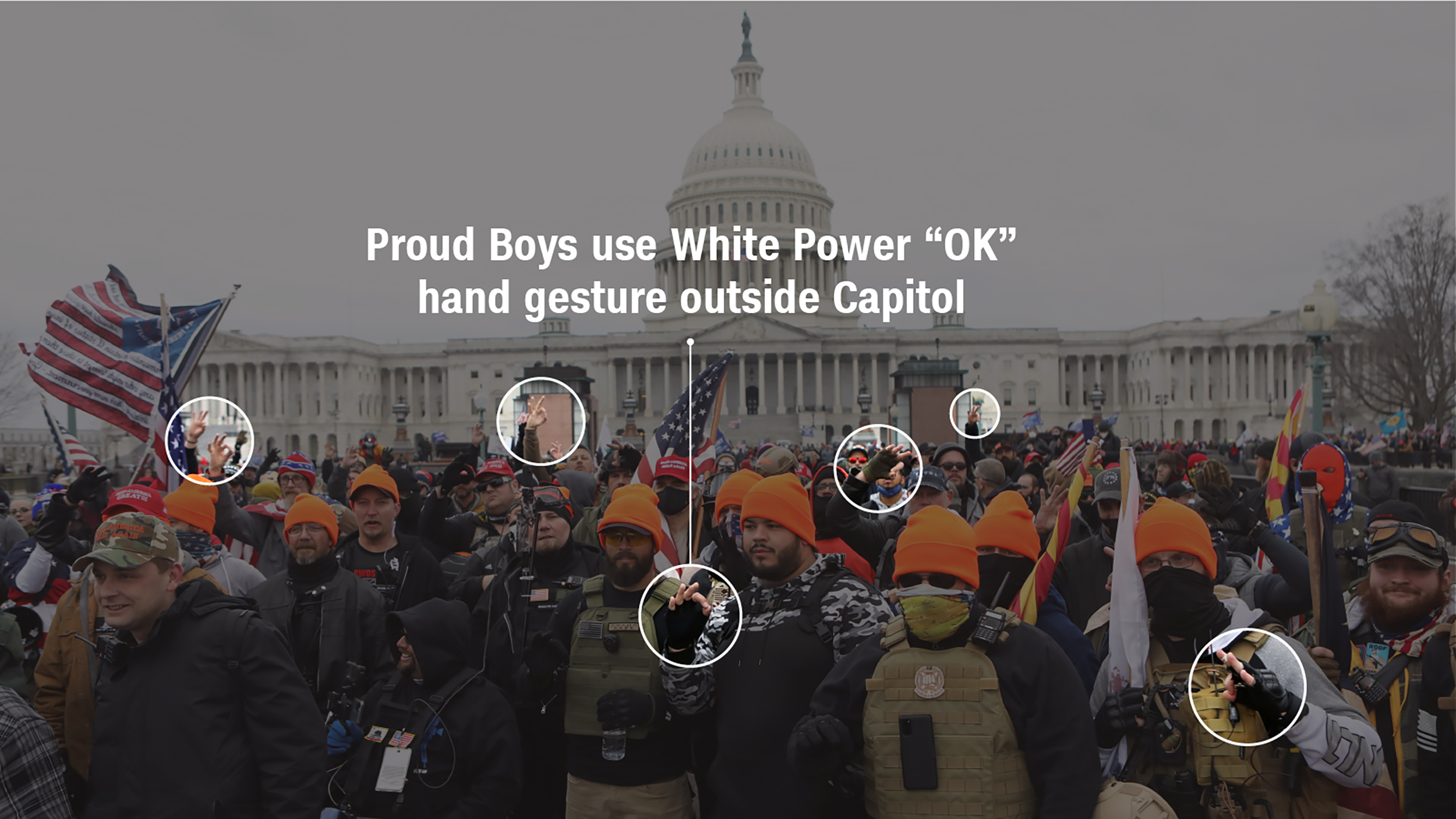 The far-right has co-opted the OK sign as a trolling gesture and, for some, as a symbol of white power. The ADL added that symbol toits a long-standing database of slogans and symbols used by extremists.

"They are wearing orange caps to identify each other; in past rallies, they wore identifying shirts and other gear, but they ditched that for this event after their leader was recently arrested," Pitcavage explained.

The Proud Boys has been supportive of President Trump and present at "Stop The Steal" rallies in Washington, DC. The Proud Boys' leader, Henry Tarrio, who goes by Enrique Tarrio, was released from police custody Tuesday on charges related to allegedly burning a Black Lives Matter banner taken from a Black church last month during protests in the city after a "Stop the Steal" rally last month. He was ordered by a local judge to stay out of DC as he awaits trial, including during this week's protests. 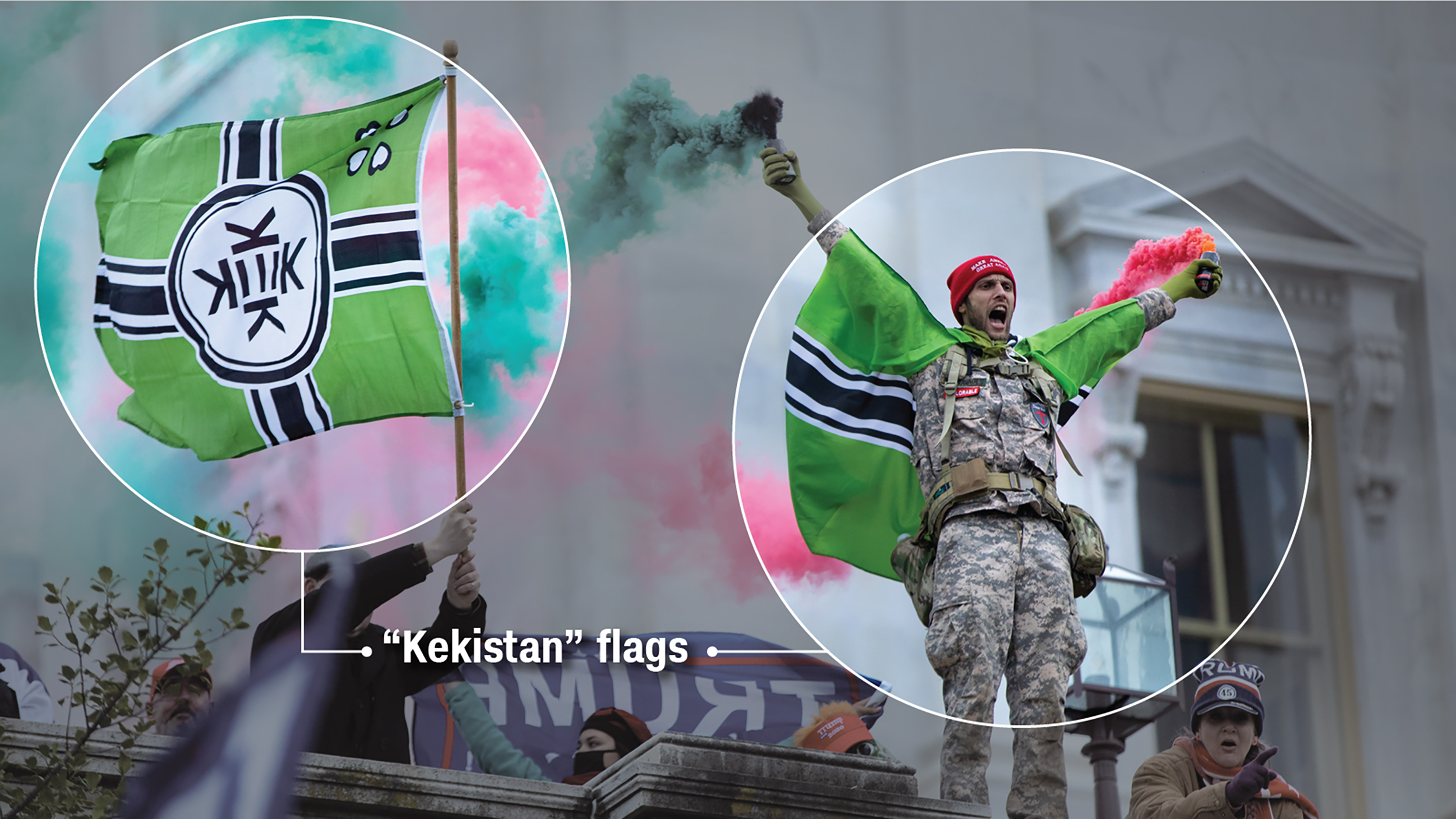 The green, white and black flag was created by some members of the 4chan online community to represent a made-up joke country named for "Kek," a fictional god they also created. It has long been present at right-wing and far-right rallies.

"The Kekistan flag is controversial because its design was partially derived from a Nazi-era flag; this was apparently done on purpose as a joke," Pitcavage explained. "Younger right-wingers coming from the 4chan subculture (both mainstream right and extreme right) often like to display the Kekistan flag at rallies and events." 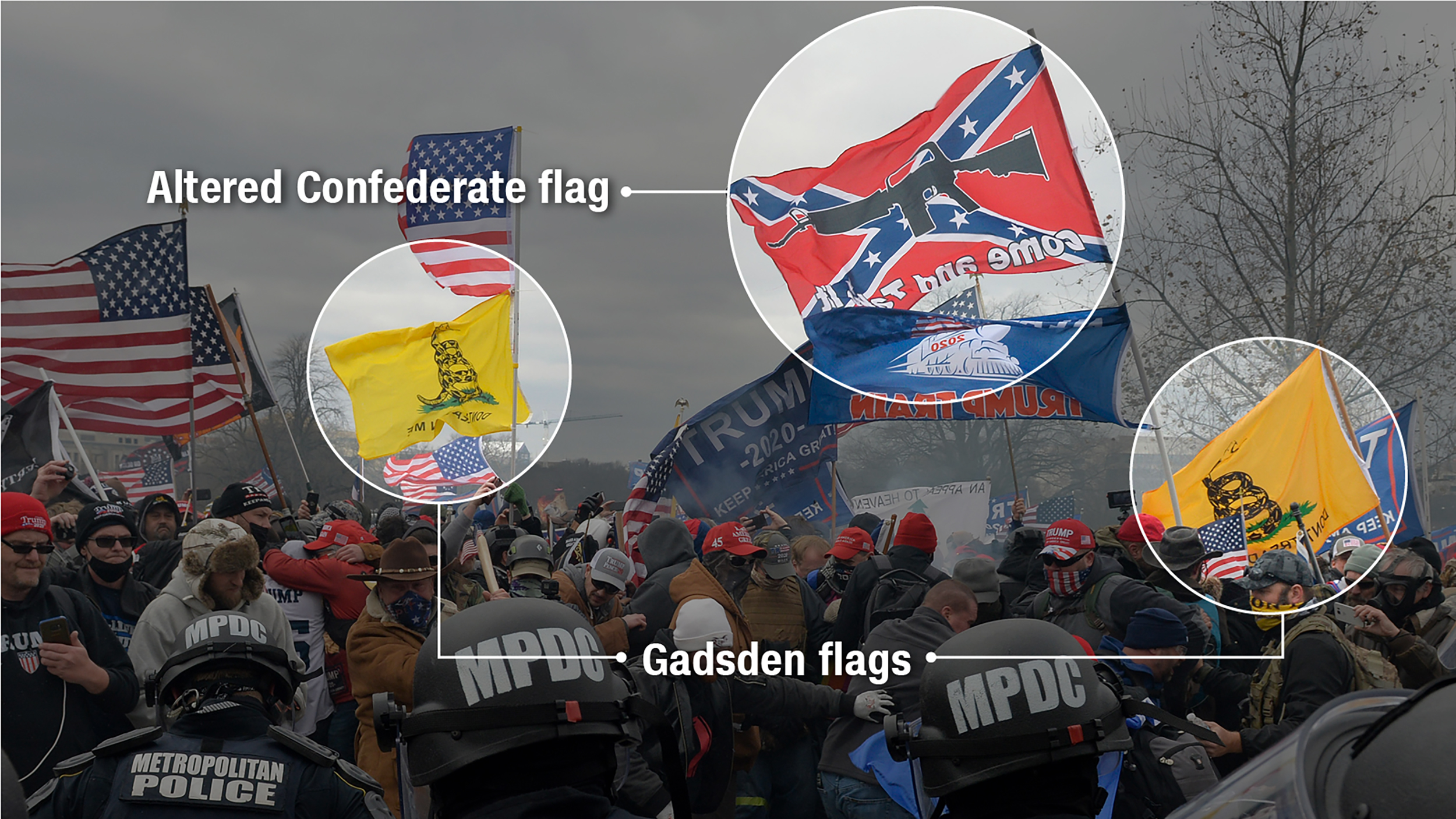 Altered Confederate and Gadsden flags were seen throughout the crowds at the Capitol. One Confederate battle flag variation included an image of an assault rifle and the slogan "Come and take it" to convey an anti-gun control message. The phrase "come and take it" paraphrases the "come and take them" retort uttered by Spartan King Leonidas at the Battle of Thermopylae when the Persian King Xerxes told him and his people to lay down their spears in return for their lives, Pitcavage said. 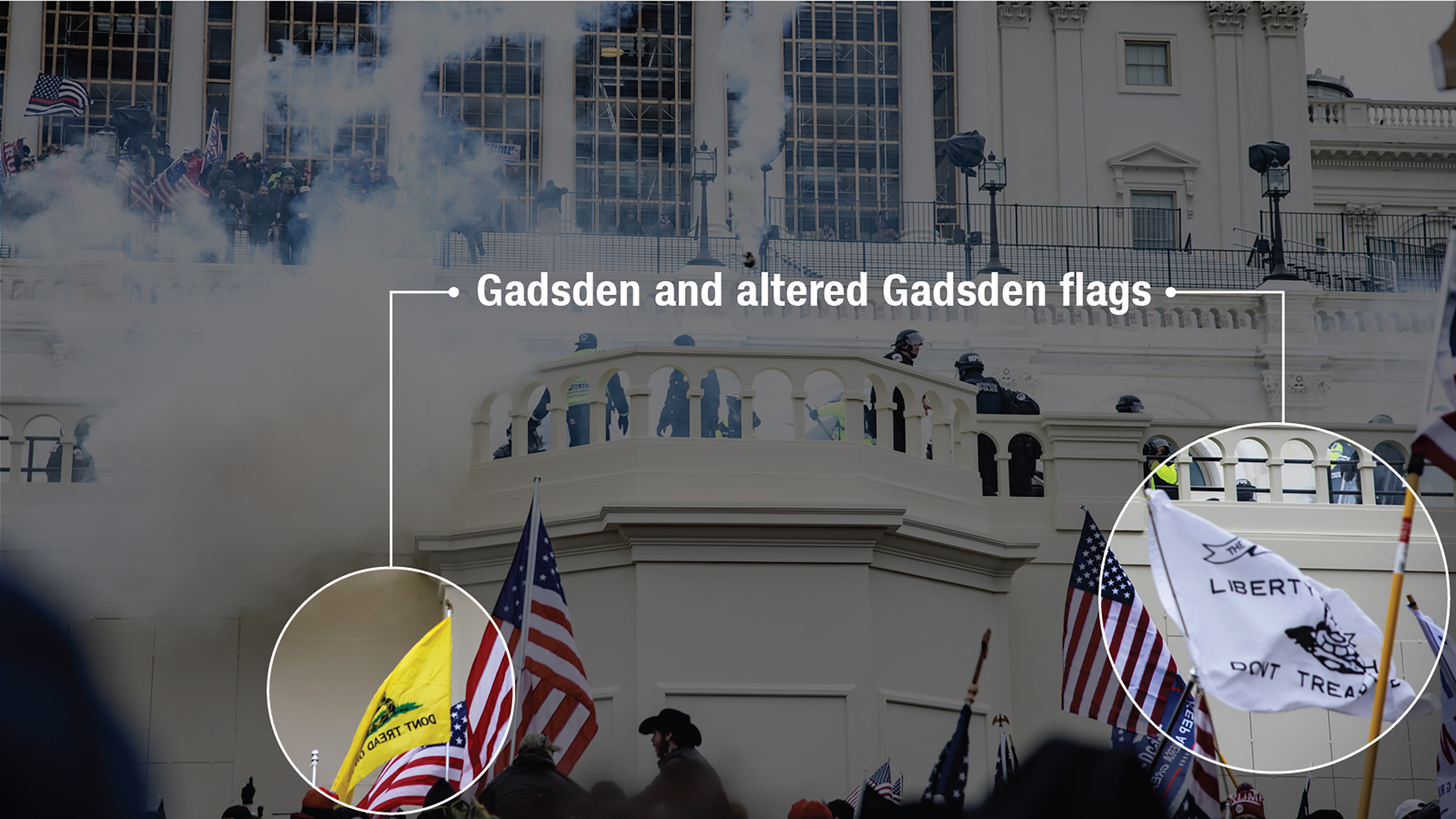 The Gadsden flag, which is known to many as the "Don't Tread on Me" flag, is a traditional and historical patriotic flag dating to the American Revolution. The flag and symbol are also popular among Libertarians. But it also has been co-opted by right-wing groups. Pitcavage explains that while some fly it as a symbol for patriotism, others use it as a "symbol of resistance to perceived tyranny." 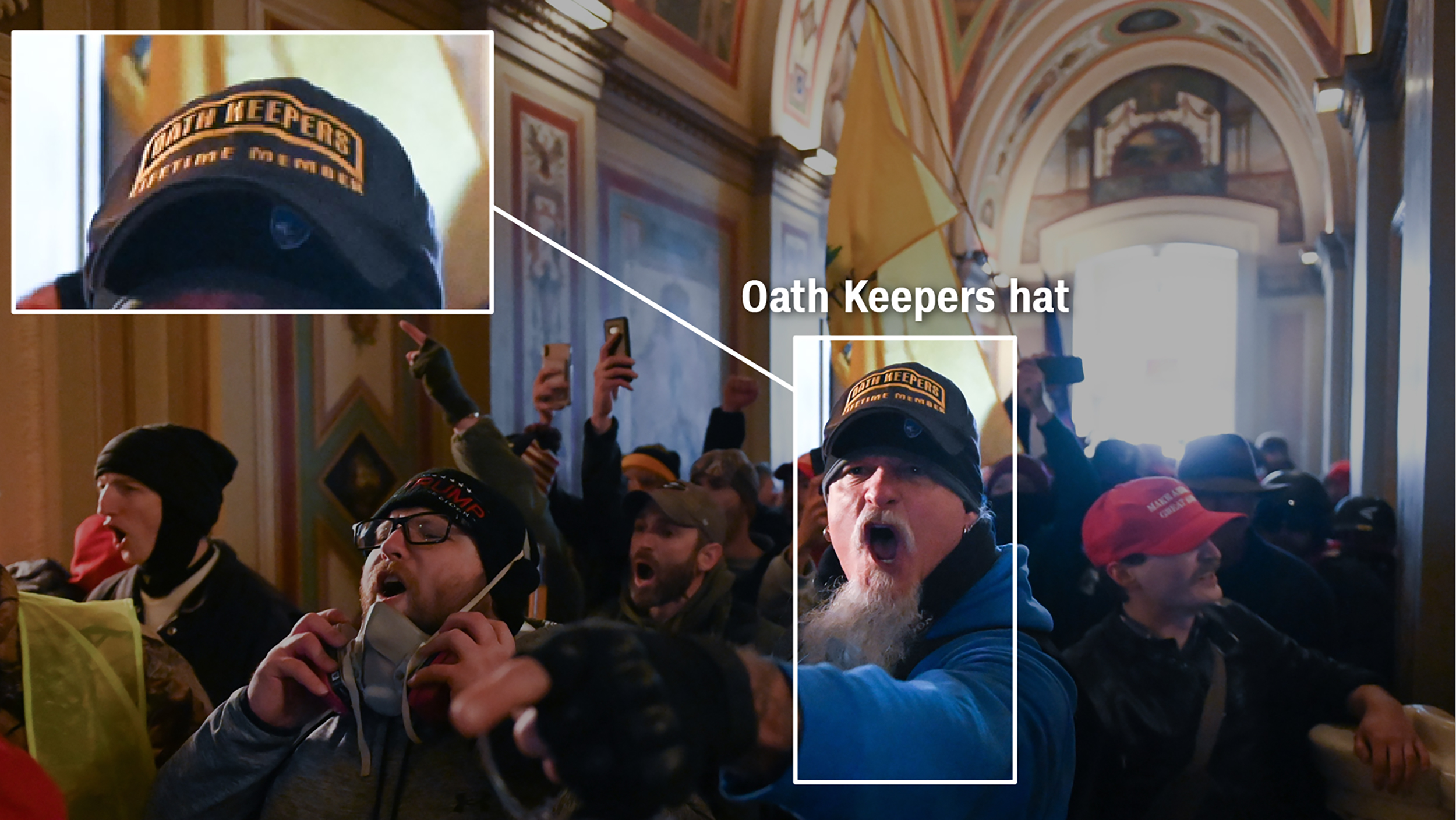 A man is seen wearing an Oath Keepers hat inside the Capitol after it was breached. The Oath Keepers is a pro-Trump, far-right, anti-government group that considers itself part of the militia movement charged to protect the country and defend the constitution. The group tries to recruit members from among active or retired military, first responders, or police.

Their leader has spouted vast conspiracy theories on his blog, accused Democrats of stealing the election, previously threatened violence if it was necessary on Election Day during an interview with far-right conspiracist Alex Jones and said his group would be armed to protect the White House if necessary, according to the ADL. 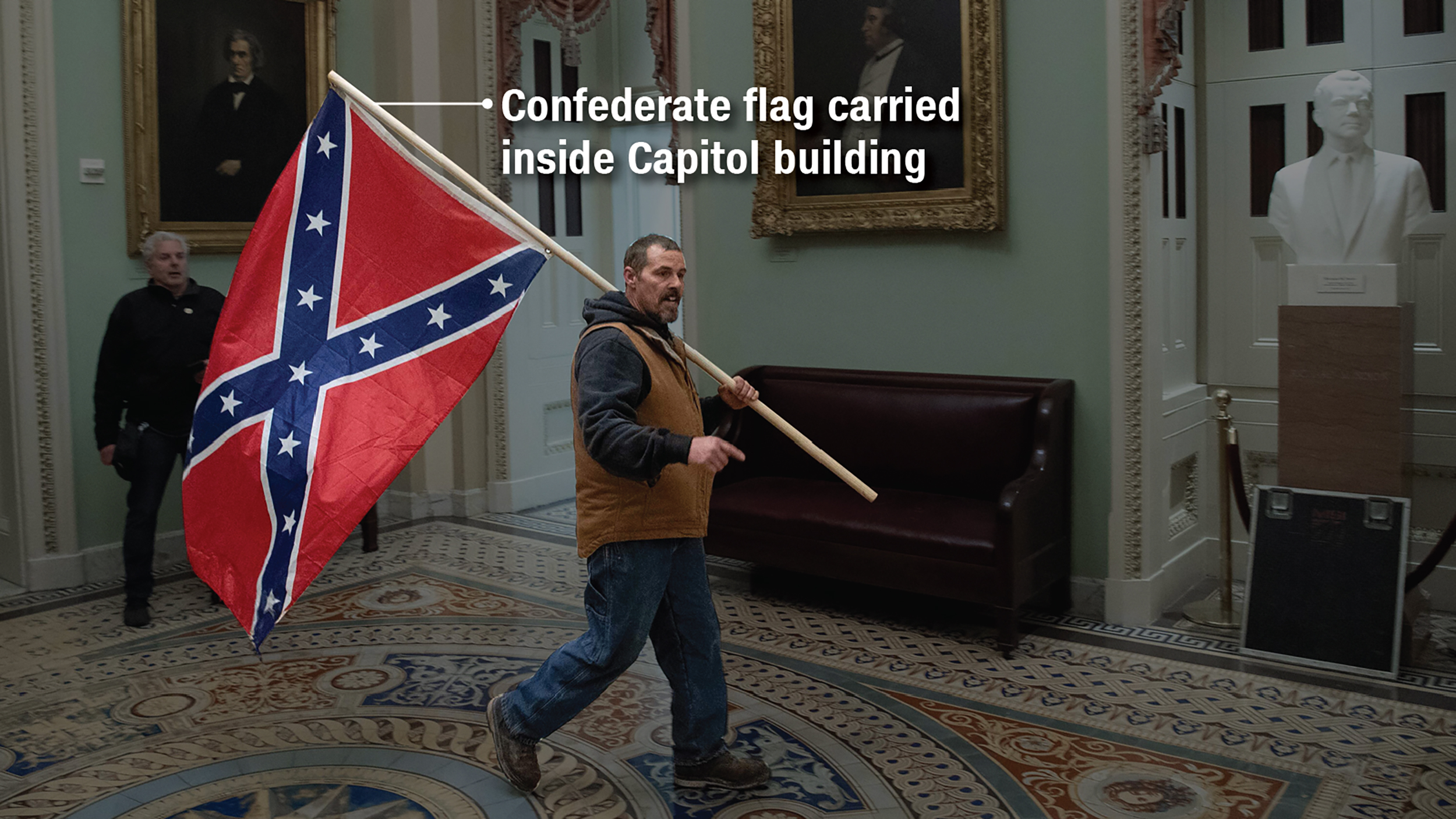 During the United States' long Civil War, no Confederate battle flag came within the shadow of the US Capitol, but on Wednesday, an insurrectionist carried one right through its halls.

Photographers captured a man carrying it past the portraits of abolitionist Charles Sumner and slaveholder John Calhoun.

The flag was always a symbol of support for slavery. After World War II, it became a prominent symbol of Jim Crow and segregation, Pitcavage says not surprisingly, it is a popular symbol among white supremacists -- even outside the United States.

A rioter cloaks himself in an America First flag with the logo of the podcast by far-right commentator Nick Fuentes. Fuentes attended the event at the Capitol but was photographed remaining outside the Capitol building.

"America First" was also a slogan President Trump used in describing his foreign policy. Its adoption was criticized by the ADL, which said it had an anti-Semitic use seeking to keep the US out of World War II.

The ADL says Fuentes is part of the "groyper army," which the ADL calls a white supremacist group.

"While the group and leadership's views align with those held by the white supremacist alt-right, groypers attempt to normalize their ideology by aligning themselves with 'Christianity' and 'traditional' values ostensibly championed by the church, including marriage and family," the ADL explains. "Like the alt-right and other white supremacists, groypers believe they are working to defend against demographic and cultural changes that are destroying the 'true America' -- a white, Christian nation."

A rioter inside the Capitol wore a "Camp Auschwitz" sweatshirt. The bottom of the shirt reads "Work brings freedom," which is the rough translation of the words "Arbeitmacht frei" on the gates of the Nazi concentration camp. Auschwitz was the largest and most infamous Nazi concentration camp, where about 1.1 million people were killed during World War II.

Pitcavage says he believes the shirt came from the now-defunct website Aryanwear. The design, which has been around for about 10 years according to Pitcavage, has been popping up on differing websites in recent weeks, though it is often taken down when a complaint is made. 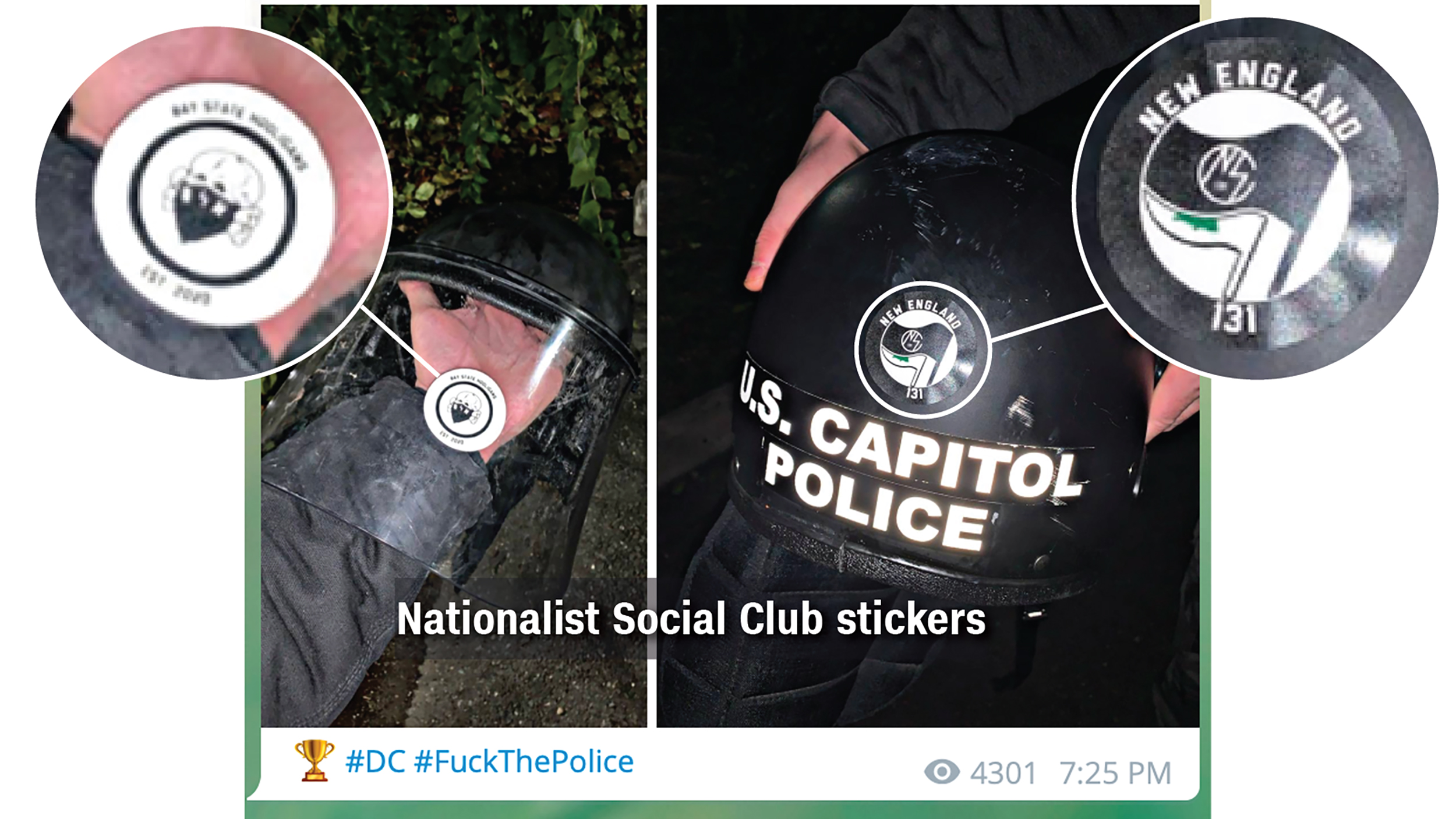 A social media image shows Nationalist Social Club stickers on what appears to be US Capitol Police equipment It's unclear when the photo was taken, but it was posted Wednesday in a Telegram chat the group uses, which includes a Nazi symbol as part of their name.

NSC, apparently a wordplay on the National Socialists or Nazi party, is a neo-Nazi group that has regional chapters in both the United States and across the globe, according to the ADL. It is unclear if the sticker on the right refers to a New England chapter, or because the group originally called itself the New England Nationalists Club.

"NSC members see themselves as soldiers at war with a hostile, Jewish-controlled system that is deliberately plotting the extinction of the white race," according to the ADL. "Their goal is to form an underground network of white men who are willing to fight against their perceived enemies through localized direct actions." 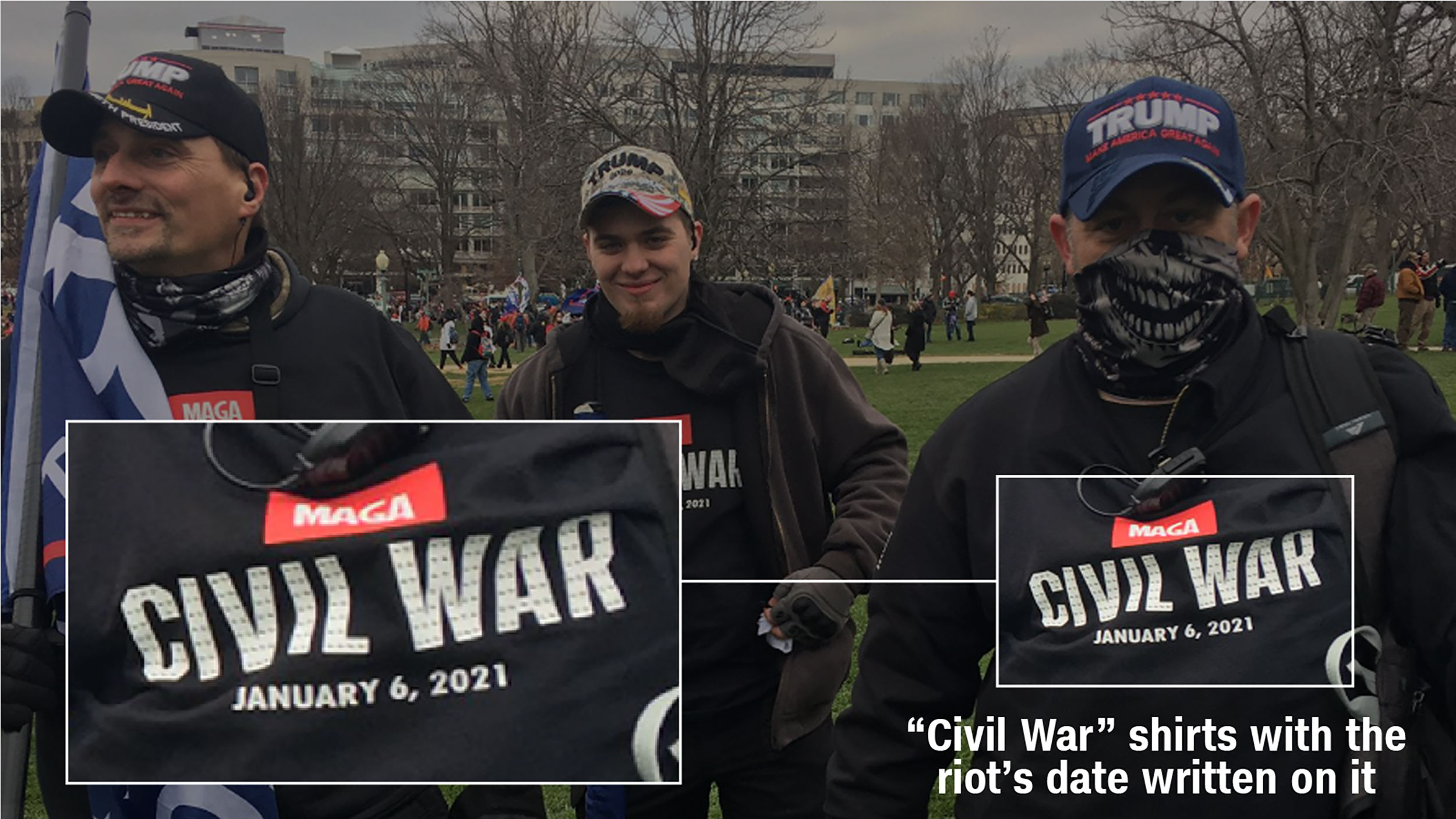 There are still many questions about how exactly the attack on the Capitol happened and who led the charge. But the calls for overthrowing the government and for a civil or race war have long been rallying cries in far-right circles.

The shirts worn by these men on the Capitol grounds on Wednesday show there was at least an intention to commemorate the day. They wore pre-printed shirts, referencing Trump's signature Make America Great Again slogan, alongside the words Civil war and the date of the event that turned into insurrection.

Many commenters in far-right forums have written since the attack, that this is just the beginning of that civil war that many of them have long desired. 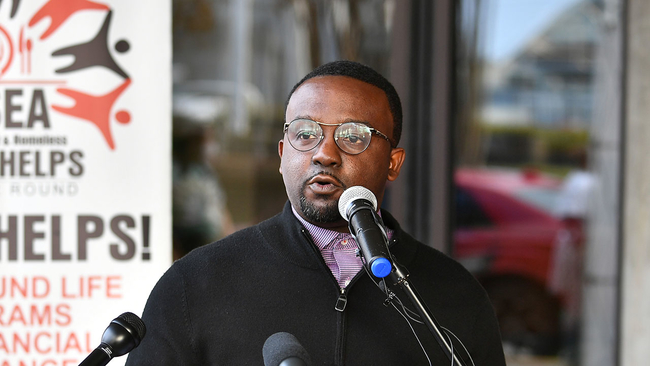 'I Am A Man': Story behind Clayborn Temple, iconic civil rights haven

Massachusetts teen turns in her own family as Capitol rioters 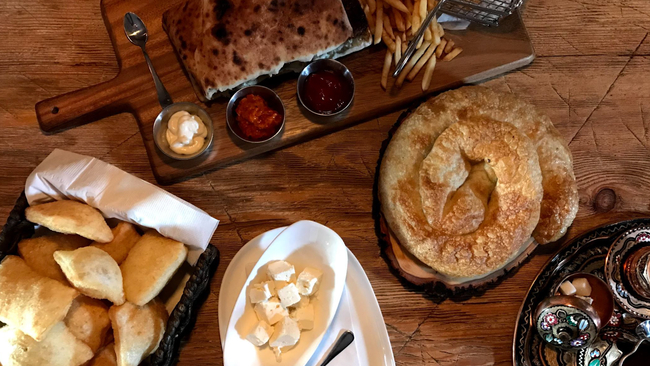