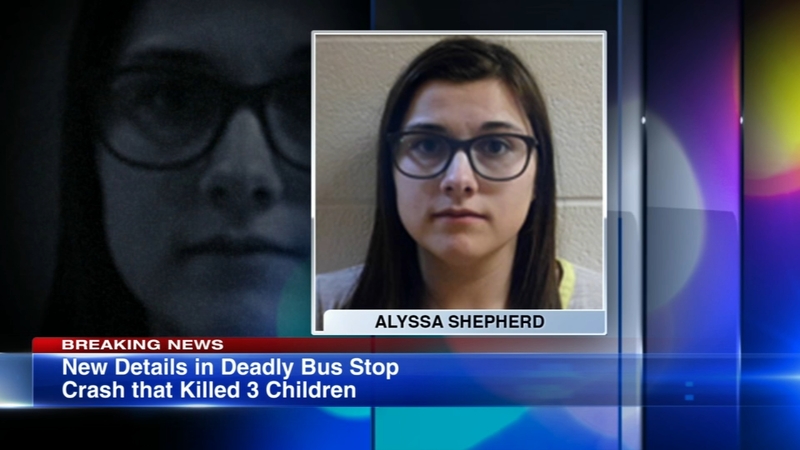 ROCHESTER, Ind. -- The woman charged with reckless homicide in the deaths of three siblings struck and killed at a school bus stop Tuesday morning told police she saw the bus lights, but did not recognize it was a school bus, ABC News confirmed.

Alyssa Shepherd, 24, is charged with three felony counts of reckless homicide and one misdemeanor count of passing a school bus while its arm is extended, causing injury.

Indiana State Police said twins 6-year-old Xzavier and Mason Ingle and their older sister 9-year-old Alivia Stahl were crossing the street to board their school bus, which had its lights on and caution arm extended, at about 7:15 a.m. near 4600 N State Road 25 in Rochester in Fulton County when they were struck and killed.

Shepherd also told police she had three children in her backseat when the crash happened.

An 11-year-old boy, identified by state police as Maverik Low, was taken to Parkview Hospital in Fort Wayne, Indiana, where he was undergoing surgery for multiple broken bones and internal injuries, police said. His family said Wednesday he is in stable condition after surgery and asked for privacy as he recovers.

"We would like to thank those who have prayed for our family and the families of those involved in yesterday's tragedy. Maverik is currently in stable condition. Our family is focused on his recovery at this time and requests privacy as we heal together," they said in a statement.

Shepherd was held in the Fulton County Jail on a surety bond of $15,000 and was released on bond shortly after 7 p.m., state police said. Shepherd is the children's director at Faith Outreach - A Foursquare Gospel Church nearby in Rochester.

As we remember the three children struck and killed at their bus stop, watch these school bus safety tips for drivers to help prevent another tragedy.

"I haven't seen first responders and troopers cry in a long time," Indiana State Police Sergeant Tony Slocum said. "When the children's father had to make identification of his children, that was just gut-wrenching. We saw tears today and our hearts just go out to them because most of us have children and we can't imagine the pain that he felt today. It was heartbreaking It's still heartbreaking."

Tippecanoe school officials said in the wake of the incident they have moved the bus stop from State Road 25 into Meiser Park.

"This has been a very difficult day for our school family as we attempt to cope with the devastating loss of three elementary students and a critically injured middle school student. I am very appreciative of our teachers, administrators and staff that assisted, comforted, and supported our students and each other today in our schools. We also had counselors and clergy available for anyone who desired additional support and we will continue to provide counselors as needed.

In addition, I am establishing a transportation safety review committee which will examine all of our bus stop locations to ensure our children are transported safely. I will co-chair this committee with Fulton County Sheriff Christopher Sailors and Kosciusko County Sheriff W.R. Goshert. Other committee members will include school transportation officials, bus drivers and the president of the Tippecanoe Valley School Corporation Board of School Trustees."